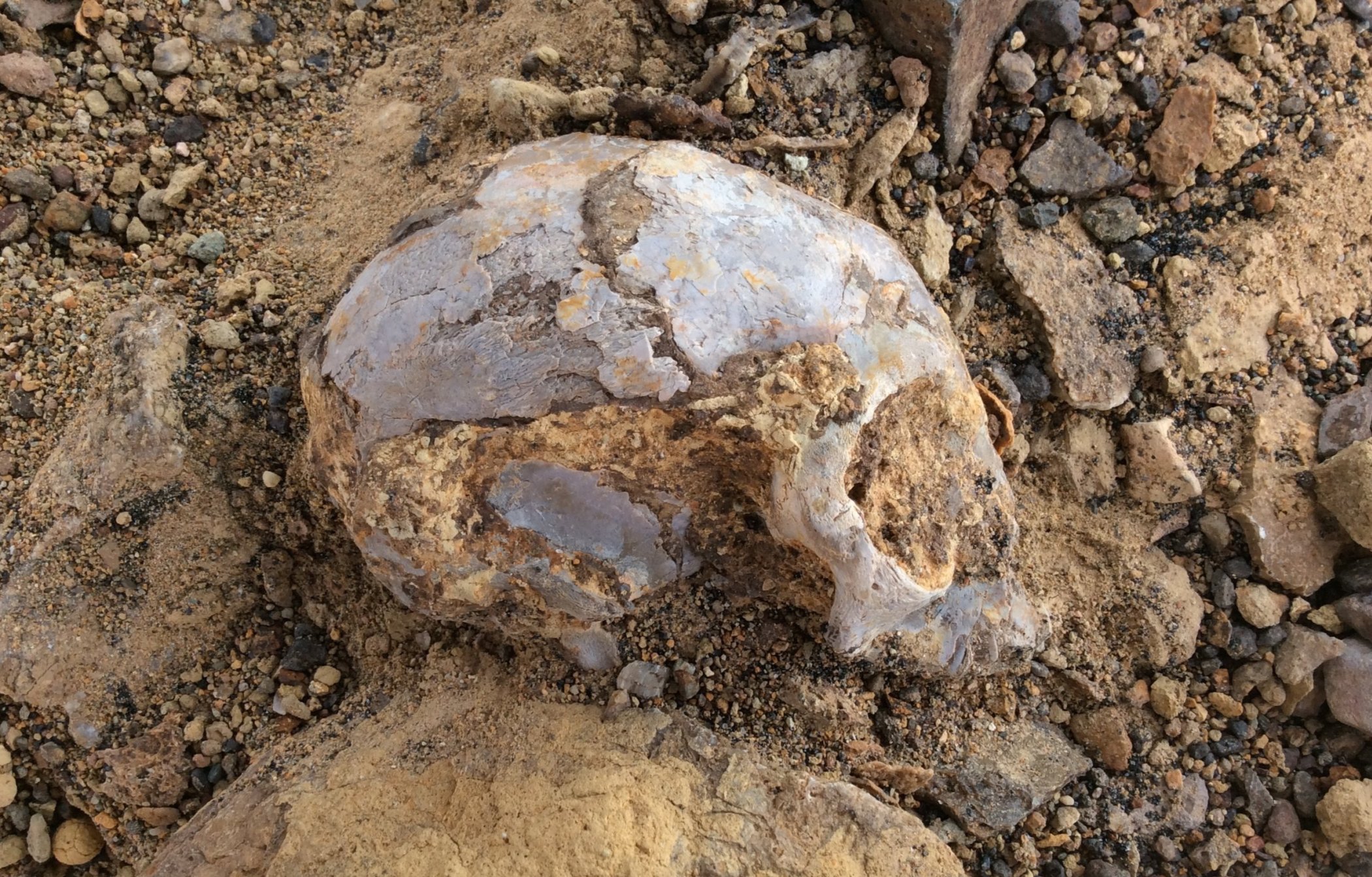 
Stony Brook, NY, August 9, 2017 – The discovery in Kenya of a remarkably complete fossil ape skull reveals what the common ancestor of all living apes and humans may have looked like. The find, to be announced in the scientific journal Nature on August 10th, belongs to an infant that lived about 13 million years ago. The research was done by an international team led by Isaiah Nengo of the Stony Brook University-affiliated Turkana Basin Institute, Stony Brook University, and De Anza College, U.S.A.

The fossil is the skull of an infant, and it is the most complete extinct ape skull known in the fossil record. Many of the most informative parts of the skull are preserved inside the fossil, and to make these visible the team used an extremely sensitive form of 3D X-ray imaging at the synchrotron facility in Grenoble, France. “We were able to reveal the brain cavity, the inner ears and the unerupted adult teeth with their daily record of growth lines,” says Paul Tafforeau of the European Synchrotron Radiation Facility. “The quality of our images was so good that we could establish from the teeth that the infant was about 1 year and 4 months old when it died.”


The unerupted adult teeth inside the infant ape’s skull also indicate that the specimen belonged to a new species, Nyanzapithecus alesi. The species name is taken from the Turkana word for ancestor “ales.” “Until now, all Nyanzapithecus species were only known from teeth and it was an open question whether or not they were even apes,” notes John Fleagle of Stony Brook University. “Importantly, the cranium has fully developed bony ear tubes, an important feature linking it with living apes,” adds Ellen Miller of Wake Forest University.

Alesi’s skull is about the size of a lemon, and with its notably small snout it looks most like a baby gibbon. “This gives the initial impression that it is an extinct gibbon,” observes Chris Gilbert of Hunter College, New York. “However, our analyses show that this appearance is not exclusively found in gibbons, and it evolved multiple times among extinct apes, monkeys, and their relatives.”

That the new species was certainly not gibbon-like in the way it behaved could be shown from the balance organ inside the inner ears. “Gibbons are well known for their fast and acrobatic behavior in trees,” says Fred Spoor of University College London and the Max Planck Institute of Evolutionary Anthropology, “but the inner ears of Alesi show that it would have had a much more cautious way of moving around.”

“Nyanzapithecus alesi was part of a group of primates that existed in Africa for over 10 million years,” concludes lead author Isaiah Nengo. “What the discovery of Alesi shows is that this group was close to the origin of living apes and humans and that this origin was African.”


About Stony Brook University
Stony Brook University is going beyond the expectations of what today’s public universities can accomplish. Since its founding in 1957, this young university has grown to become one of only four University Center campuses in the State University of New York (SUNY) system with more than 25,700 students, 2,500 faculty members, and 18 NCAA Division I athletic programs. Our faculty have earned numerous prestigious awards, including the Nobel Prize, Pulitzer Prize, Indianapolis Prize for animal conservation, Abel Prize and the inaugural Breakthrough Prize in Mathematics. The University offers students an elite education with an outstanding return on investment: U.S. News & World Report ranks Stony Brook among the top 40 public universities in the nation. Its membership in the Association of American Universities (AAU) places Stony Brook among the top 62 research institutions in North America. As part of the management team of Brookhaven National Laboratory, the University joins a prestigious group of universities that have a role in running federal R&D labs. Stony Brook University is a driving force in the region’s economy, generating nearly 60,000 jobs and an annual economic impact of $4.65 billion. Our state, country and world demand ambitious ideas, imaginative solutions and exceptional leadership to forge a better future for all. The students, alumni, researchers and faculty of Stony Brook University are prepared to meet this challenge.