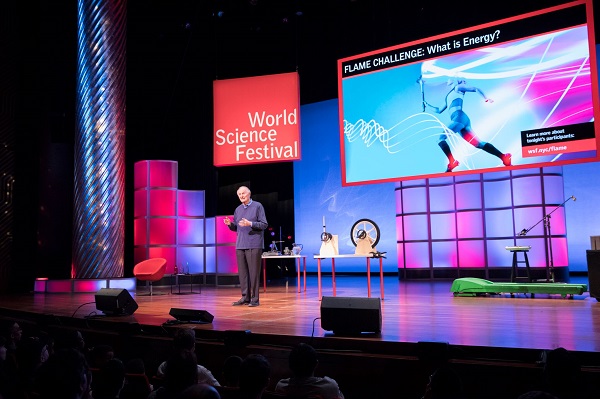 ​
STONY BROOK, NY, June 5, 2017 –  “Without energy, a ball won’t roll, a car won’t drive and a babysitter won’t get off the couch. Energy is what get things moving.”  Those were just some of the examples used to tackle the question “What is Energy?” in the Alan Alda Center for Communicating Science’s  6th annual The Flame Challenge.  This year’s question was posed to scientists by 11-year olds from around the world.

After reviewing hundreds of written and visual submissions from scientists based in the United States, Germany, Australia and beyond, Alan Alda, the

and intermediate school student judges
announced the winners of The Flame Challenge contest at the World Science Festival in New York City on Saturday, June 3.

, a civil engineer from Hillsboro, Oregon was selected as the winner of the written contest and

a chemist and freelance science writer from Mangerton, Australia was selected for her

“The Alda Center training works, and 21,000 kids around the world put their stamp of approval on it!” says Alan Alda of the winning entries. “The Alda Center for Communicating Science is working to better the role of women in science, and I’m delighted to see these two women being chosen by classrooms far and wide as expert communicators.”

Each were awarded a $1,000 cash prize along with a trophy presented by Alan Alda, actor, author, and founder of the Alda Center and The Flame Challenge.

An international contest now in its sixth year, The Flame Challenge is judged by 11-year-olds around the world, challenging scientists at every level – from graduate students to senior researchers – to answer and communicate familiar yet complex concepts in a way that is understandable to an 11-year-old. Entries can be submitted in written or visual format.

“I’m the mother of young children. When I think about energy, usually I’m thinking about how I wish I had more of it!” says Hannah Holt. “There’s something special about learning a new concept. If students have some degree of that ‘ah-ha!’ excitement by reading my entry, I’ll be happy. If that excitement translates into them researching more of their own questions, I’ll be even more thrilled.”

“I was fortunate to be a part of the workshops and talks Mr. Alan Alda presented last year on his visit to Canberra and [Australian National University]. He talked about The Flame Challenge and encouraged us to enter, so I did,” says Johanna Howes.  “I’m hoping that students can start to see energy everywhere. Science is not just for the classroom or a lab – you can apply it to everything.” Dr. Howes also maintains a YouTube channel, Class 509: Science History.

The Flame Challenge is sponsored in part by the American Chemical Society (ACS), the American Association for the Advancement of Science (AAAS) and IBM Research. For more information, visit

About the Alda Center
The Alan Alda Center for Communicating Science empowers scientists and health professionals to communicate complex topics in clear, vivid, and engaging ways; leading to improved understanding by the public, media, patients, elected officials, and others outside of their own discipline.

About The Flame Challenge
The annual Flame Challenge contest is part of the Alan Alda Center for Communicating Science’s mission of helping scientists communicate more effectively with the public. The Flame Challenge is sponsored in part by The American Chemical Society (ACS), the American Association for the Advancement of Science (AAAS) and IBM Research. ACS is chartered by the U.S. Congress and is a global leader in providing access to chemistry-related research. ACS encourages each of its 164,000 members to speak simply about their science and its importance to all of our lives. The AAAS, the world’s largest multidisciplinary scientific society and publisher of the journal Science, was founded in 1848. It includes some 261 affiliated groups, serving a total of 10 million individuals, and its mission is to advance science and serve society. IBM Research is one of the world’s largest and most influential corporate research labs, with more than 3,000 researchers in 12 labs located across six continents. We play the long game, investing now in tomorrow’s breakthroughs.