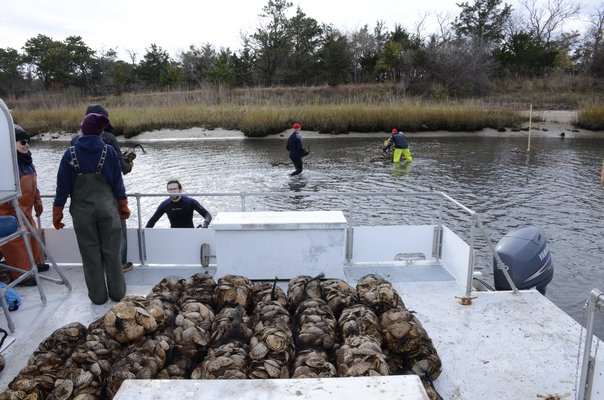 Stony Brook, NY, December 5 2017 ­­ – The first oyster reef on Long Island has been installed in Shinnecock Bay by Stony Brook University School of Marine and Atmospheric Sciences (SoMAS) researchers. The installation is a conservation effort to rejuvenate oyster reproduction on Long Island and help improve and maintain clean water.

Led by Christopher Gobler, PhD, the reef was made with more than 500,000 juvenile oysters stacked in bags placed in the shallows of the bay. Gobler and is team will monitor the reef, installed November 30, and track its progress incrementally over the next several years. They hope the reef will lay the foundation for a new era of oyster production in the region and emerge as a shellfish habitat that will naturally filter salt water enhancing its quality.

The State Department of Environmental Conservation approved the reef, which is a $4 million project and part of the Shinnecock Bay Restoration Program, a joint initiative of SoMAS and the institute for Ocean Conservation Science.