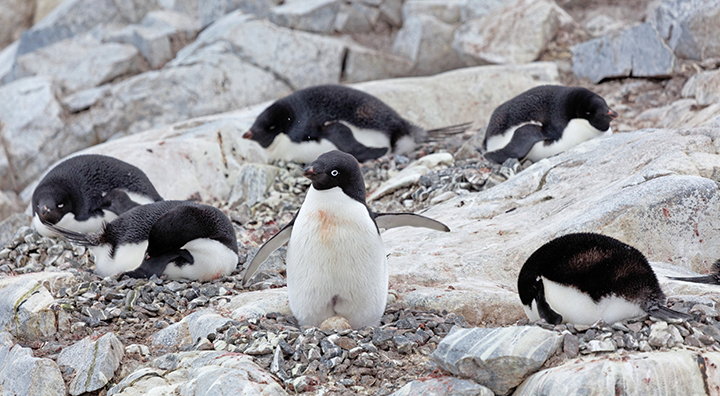 The study findings, published in Nature Communications, suggest that existing methods of using penguins to monitor ocean health may be ineffective


Instead, most of the short term fluctuations in the number of penguins breeding has no known cause; such ‘noise’ in the system is likely due to a host of marine and terrestrial factors that have not, or cannot, be measured at the majority of sites where penguins breed.

“In many ways, our study shows that watching Adélie penguin abundance may be like watching the stock market—short term fluctuations may be exceptionally hard to predict and may not signal any change in the fundamental health of the system,” explains senior author Heather Lynch, Associate Professor of Ecology & Evolution at Stony Brook University.

“Therefore, adaptive management of marine resources, whereby we stand ‘at the ready’ to adjust our conservation strategy as new data are collected, may be as difficult, and as risky, as trying to time the stock market. Instead, our results suggest that to the extent Adélie penguins are used as a barometer of ecosystem health, the true dynamics may emerge only very slowly.”

This finding, detailed in the paper “Pan-Antarctic analysis aggregating spatial elements of

Adélie penguin abundance reveals robust dynamics despite stochastic noise,” is important because it means that tracking abundance at individual colonies, one of the cornerstones of monitoring the health of the Antarctic ecosystem, may not provide a reliable signal on short time scales.


“By analyzing the data, we found that relatively little of the year-to-year variability in Adélie penguin abundance could be linked to something in the environment we can actually measure,” said lead author Dr. Christian Che-Castaldo, a postdoctoral researcher in the Department of Ecology & Evolution at Stony Brook University. “Precipitation at the site is one factor we know is likely to drive some of this unexplained variation, but like many other potential factors, it’s not one we can easily measure in Antarctica.”

Adélie penguins are one of four species of penguins with significant breeding populations in the Antarctic. Adélie penguins are the most well studied of all penguin species and, being distributed around the entire coastline of the Antarctic continent, are often considered the “canaries in the coal mine” for anthropogenic threats like fishing and climate change.

In this study, the authors analyzed data from all 267 Adélie penguin populations in Antarctica stretching back to 1979, using data collated from the scientific literature under the auspices of a NASA-funded tool called the Mapping Application for Penguin Populations and Predicted Dynamics (MAPPPD).

They used a statistical technique known as hierarchical Bayesian modelling to accommodate the fact that most Adélie penguin breeding locations are surveyed only rarely. Finding a statistically-rigorous way to ‘fill in’ missing data was key to the effort, since it allowed the research team to look at the population dynamics of penguins at larger spatial scales than has been possible in the past.

Dr. Lynch emphasized that not only did the research uncover more details about the increase in Adélie penguin populations over the last three decades, but it suggests that monitoring more breeding colonies sporadically, rather than fewer sites consistently, may provide more timely and more reliable information for policymakers, despite short term fluctuations common in Adélie colonies.

The study also illustrates a new method of tracking Adélie penguin populations throughout the entire continent rather than at selected study sites where the majority of the data are actually collected. They hope to study other penguin species in Antarctica using the same method.

“The findings, overall, provide clear guidance on how to extract the most information from our monitoring efforts, and highlight the benefits of working across disciplines for effective conservation,” added co-author Dr. Jenouvrier at WHOI.


Co-investigators of the research included scientists from the Woods Hole Oceanographic Institution in Woods Hole, Ma.; the National Center for Atmospheric Research in Boulder, Co.; the Department of Natural Resource and Environmental Science in Reno, Nv.; the University of South Florida in St. Petersburg, Fla.; and the Centre d’Edudes Biologiques de Chize in France.