Could Concrete Help Solve the Problem of Air Pollution? 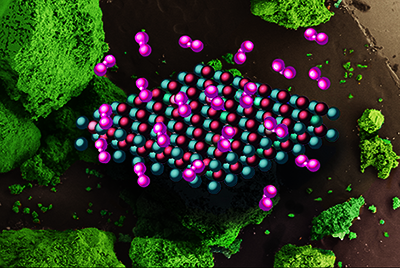 Could Concrete Help Solve the Problem of Air Pollution?

STONY BROOK, N.Y., July 7, 2017 – New research reveals that sulfur dioxide, a major contributor to air pollution, is removed from the air by concrete surfaces. Stony Brook University researcher Alex Orlov, PhD, and colleagues discovered how concrete interacts and eliminates sulfur and nitrogen oxides. Their findings, published in the July edition of the Journal of Chemical Engineering, could be a significant step toward the practice of using waste concrete to minimize air pollution.

According to the World Health Organization, as many as seven million premature deaths of people worldwide may be linked to poor air quality and pollution. Sulfur dioxide emissions are among the most common pollutants into the air globally, with power plants emitting the most sulfur dioxide. Cement kilns also produce approximately 20 percent of all sulfur dioxide industrial emissions.

“Even though producing concrete causes air pollution, concrete buildings in urban areas can serve as a kind of sponge adsorbing sulfur dioxide to a high level,” explained Dr. Orlov, Associate Professor of Materials Science and Chemical Engineering in the College of Engineering and Applied Sciences, and a faculty member of the Consortium for Inter-Disciplinary Environmental Research at Stony Brook University. “Our findings open up the possibility that waste concrete coming from building demolitions can be used to adsorb these pollutants.”

He added that concrete remains the most widely used material in the world and is inexpensive. Because of this, Dr. Orlov emphasized that “the strategy of using pollution causing material and turning it into an environmental solution could lead to new thinking in urban design and waste management.”

Dr. Orlov cautioned that the capacity for concrete to adsorb pollutants diminishes over time as the material ages. Crushing concrete, however, can expose new surfaces and restore its pollution removing properties.

The researchers used various cement and cement-based building materials to conduct their experiments, details of which are in the paper, titled “Reactions of SO2 on hydrated cement particle system for atmospheric pollution reduction: A DRIFTS and XANES study.” They employed Diffuse Reflectance Infrared Fourier Transform Spectroscopy (DRIFTS) and X-ray absorption Near Edge Spectroscopy (XANES) to identify the levels of sulfur dioxide adsorption on the materials.

Co-authors on the paper are Girish Ramakrishnan and Qiyuan Wu of Stony Brook University, and Juhyuk Moon at the National University of Singapore.

The research in part was supported by the National Science Foundation CMMI program.