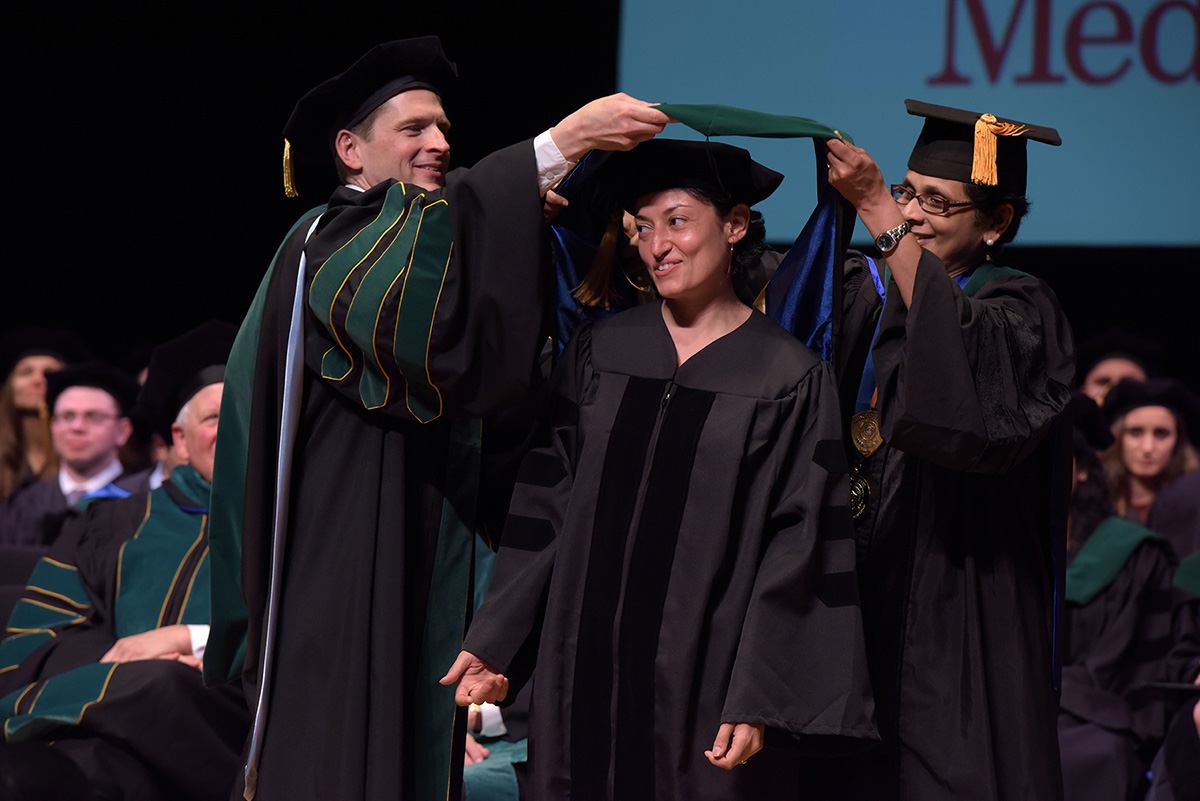 Stony Brook, NY – May 22, 2017 – One hundred and twenty-six Stony Brook University School of Medicine 2017 graduates will soon launch their careers as physicians. The Class received their MD degrees during the School’s 43rd Convocation, presided over by Kenneth Kaushansky, MD, Senior Vice President for Health Sciences and Dean of the School of Medicine. The new physicians, who gathered at the Convocation Ceremony in a packed Staller Center on May 18, begin their residency training in July.

The graduates will continue the momentum of their Stony Brook training and passion for medicine as new internists, surgeons, pediatricians, radiologists and as other physician specialists set for their residency placements. Approximately half of the Class matched into programs in New York State, and the other half in 20 other states and Washington, DC.

“Soon many of you will be going all over New York State around the country, and you will enter a field that continues to progress with new technological discoveries and incredible ways to treat patients,” said Dr. Kaushansky. “Medicine is truly inspiring, and each of you in your chosen calling will make a tremendous difference in your patients’ lives.”

The convocation speaker, Barry Coller, MD, the David Rockefeller Professor of Medicine and Physician-in-Chief and Vice President for Medical Affairs at The Rockefeller University, provided an inspirational talk for the new MDs. Dr. Coller, a former Stony Brook faculty member, is the inventor of a clot-preventing drug ReoPro. He was a faculty member at Stony Brook when his research lead to the discovery and development of the drug, which is used in patients with cardiovascular disease and has been used in more than five million patients.

“You are well-prepared for your task, and you will succeed,” urged Dr. Coller. “All of you have unique intellectual gifts that you will use in your calling to alleviate suffering. Become medical discoverers, remain committed to caring for you individual patients, and have a sense of global responsibility in a world that is incredibly connected.”

The Class of 2017 includes a highly educated and multi-talented group of new physicians. They will enter top residency programs at institutions such as Harvard, Yale-New Haven Hospital, Emory University, UCLA, Dartmouth, Brown, NYU, and Stony Brook Medicine. Collectively, they will practice in 20 specialties. Internal Medicine ranked as the leading specialty (32), followed by Pediatrics (15) and Emergency Medicine (14).

For a number of this year’s graduates, medicine is a second career for them. They are part of what is referred to as “non-traditional” medical students, whose paths into medicine often began with educational or professional training in areas not directly related to medicine and as diverse as music, technology, or teaching.

At Stony Brook these graduates included: Derek Nelsen, a 43-year-old father and former computer programmer who will practice anesthesiology at Duke University; Jeremiah Joyce, a former film and television producer, set to begin his pediatrics residency at Children’s Hospital in Boston; and Erika Blaikie, a graphic artist for nearly 20 years with an expertise in medical illustration, who will enter an Emergency Medicine residency at St. Luke’s/Roosevelt in New York.

Jack Fuhrer, MD, Associate Dean for Admissions, who led the Presentation of the Candidates during the doctoral hooding ceremony, said that the diversity of the Class of 2017 and their talents, including the many non-traditional students, is a hallmark of Stony Brook students.

“With their life experience, abilities and genuine concern for others, this Class will have a great impact in medicine. Their journey has only just begun,” said Dr. Fuhrer.