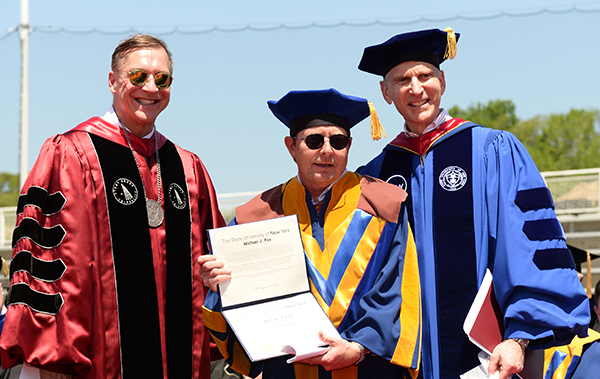 “Every single one of you has the power within you to impact the world, if you choose to act,” said Fox, who received the honorary degree of Doctor of Fine Arts. “You represent a world of endless possibilities,” he told the Class of 2017. “Among you may be the first human to walk on Mars, the engineer who will revolutionize the world’s energy technology, the next great investigative journalist who exposes corruption, or the groundbreaking scientist who discovers the cure for Parkinson’s.”

Oringer, introduced by President Stanley as one who personifies technological innovation and whom
Business Insider
named ‘the coolest person in all of New York technology’, received his undergraduate degree in Computer Science and Mathematics from Stony Brook University in 1996, and today received an honorary Doctor of Science.

“Today, I want to share three lessons I learned here at Stony Brook, which have served me well throughout my entrepreneurial journey. They are: Stay curious, take calculated risks, and embrace diversity. Stay curious, ask questions and make sure you get the answers; don’t be afraid to take calculated risks, but at the same time make sure you understand both the upside and the downside; and embrace diversity: only together can we truly make the world the best it can be. The most successful countries will be the ones that have immigration policies that attract, retain and truly embrace the smartest people on the planet, while at the same time serving those people most in need, wherever they may come from,” Oringer said. “Stony Brook is, and always has been, very diverse and welcoming – and I know it’s one of the values that the university strives for,” he added.

Oringer also recognized Stony Brook faculty for their commitment which he said helped mold his business.

“For the curious like me, the one thing I always loved about Stony Brook was how accessible professors were. We have modeled Shutterstock in that same way – there are no office hours and people are free to find me (almost) anytime.”

During his commencement address, President Stanley reminded the class of 2017 that a Stony Brook degree helps them on their way to success. He cited the recent study from Stanford which indicates that their new alma mater is ranked number three in the country among all colleges and universities and number one in the Northeast for its ability to transform students who may come from a lower income household and after

graduation are empowered to move into the top 20% of the income earning potential.
President Stanley went on to highlight three personal stories about Stony Brook University student achievers:

Taber also announced Jason Kay and Natalia Dutra Rodefeld  as recipients of the H. Lee Dennison Valedictorian Award, named in honor of Suffolk County’s first chief executive, and presented to the graduating senior or seniors who entered Stony Brook as a transfer student, completed at least

60 credits of letter-grade work at Stony Brook and attained the most outstanding academic record in that work.

The student speaker, Danielle Jean, who graduated with a Bachelor of Arts in Biology, was selected by a committee of staff and faculty from a pool of submitted speeches provided through the annual senior speaker competition, shared her thoughts about her four years as a Seawolf.“

We’re ready” Jean said. “We are ready because we know that our degree isn’t just proving to others that we’ve mastered a lot of content; our degree is proving to us that we have all of the tools that we need to face and overcome the next set of challenges.”

Finally, on behalf of the Class of 2017, Senior Class Representative Jonathan Rodriguez presented President Stanley with the Senior Class Gift of $15,000 which will support Stony Brook Children’s, student scholarship, student life, and Stony Brook Athletics, among other University initiatives. This gift adds to the nearly $250,000 Stony Brook students have raised the past 10 years to support a variety of areas that touched their lives including their individual departments, colleges or to one of a variety of other University priorities including Student Scholarships.

Stony Brook University’s 57
th
commencement ceremony was held at Kenneth P. LaValle Stadium,  where 6,991 graduates, joined more than 160,000
alumni around the globe whose lives and work personify
what Stony Brook embraces — the relentless pursuit of excellence and commitment to make a real difference. The
graduates span 71 countries, 42 states and range in age from 19 to 65.

For more information about the 57th Commencement ceremony visit http://bit.ly/1mqbSLb. 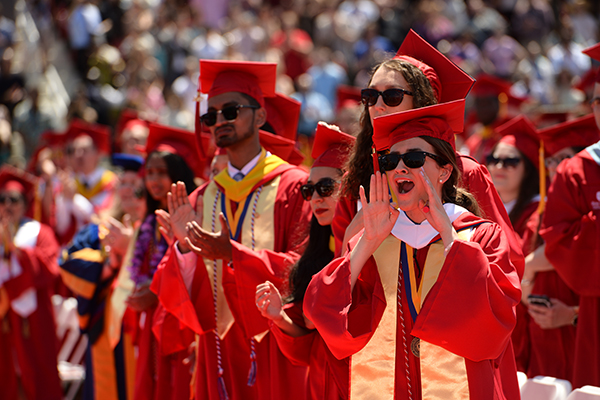