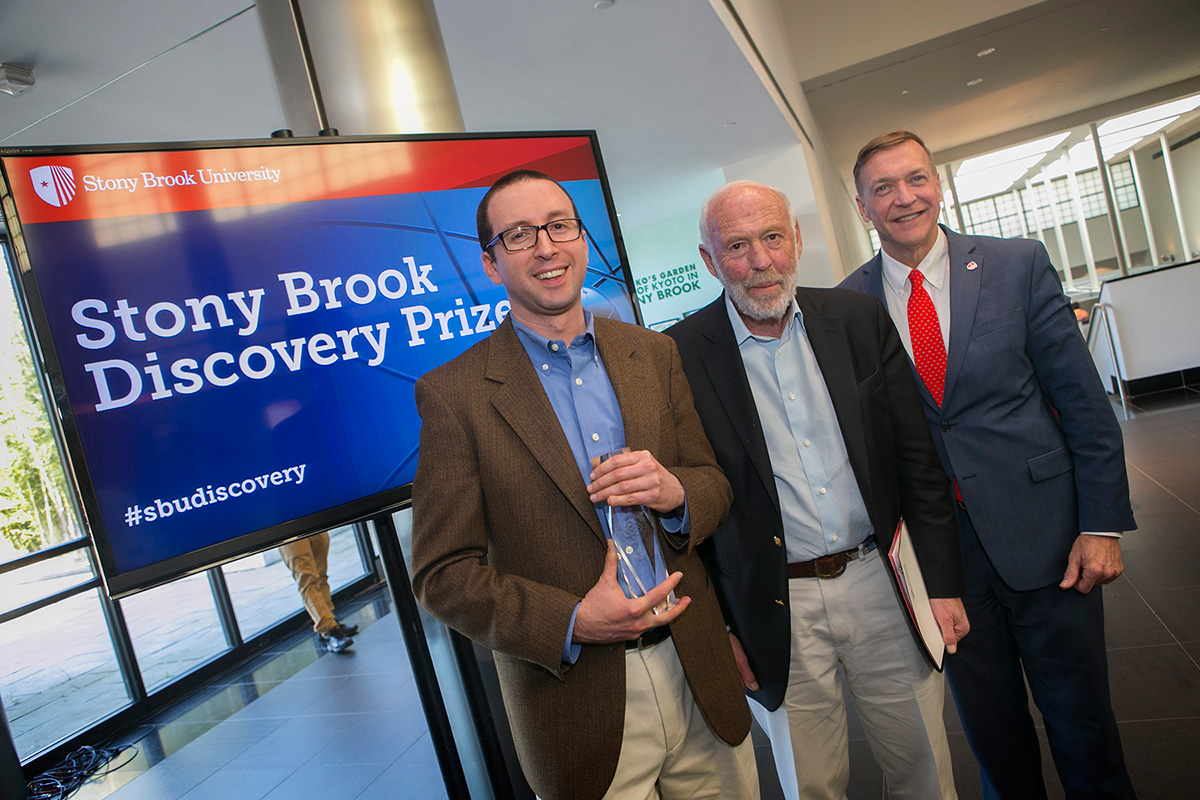 Stony Brook, NY, April 14, 2017 – Thomas Allison, PhD, Assistant Professor in the Departments of Chemistry and Physics, and a developer of a technology at Stony Brook that will record the movement of molecules that may lead to the development of better high-tech devices, is the winner of the 2017 Discovery Prize. He and three other Stony Brook professors faced off and presented their research to a panel of judges at the competition in the Charles B. Wang Center Theatre at Stony Brook University. As the winner, Dr. Allison receives a $200,000 award.

The winner was chosen by a distinguished panel of judges, including 2016 Nobel Laureate in Physics from Princeton,
F. Duncan Haldane

, and, Chairman of theSimons Foundation and a member of the National Academy of Sciences,
James H. Simons, PhD
.

“I am thrilled to be selected to receive the Discovery Prize, and this going to be a huge lift to support the tools and human resources needed to carry out our experiments,” said Dr. Allison after learning that he was selected for the award. “We believe using lasers to create movies of molecules is something that carries incredible potential to vastly improve our understanding of molecules, electrons in molecules, and how to use molecules to ultimately develop all kinds of high-tech machinery.”

“Basic scientific research helps us to better understand our universe, asks about what we don’t know and explores the boundaries of our Knowledge. It leads to breakthroughs and innovation that literally change our world,” said Samuel L. Stanley Jr., MD, President of Stony Brook University.

“Taking that extra step to fund basic science with creation of the Discovery Prize, the Stony Brook Foundation Board of Trustees has taken a creative and visionary approach to advancing new knowledge and the careers of promising young scholars in the format of a compelling competition,” he said. “I cannot be more proud of our four finalists. They are all doing extraordinary research at Stony Brook, and that’s what the Discovery Prize is all about.”

Before the competition, actor, director, and author, Alan Alda, the Founder and Visiting Professor of the Alan Alda Center for Communicating Science, took to the stage to say a few words and wish the competitors luck.

“Basic science, which gives us the deepest, most fundamental understanding of nature, is often neglected by funders because its insights don’t seem to add anything useful to our everyday life,” said Alda. “And yet, time after time, that deep but seemingly impractical knowledge has been the foundation of inventions that change our world; we wouldn’t be walking around with GPS in our cell phones if Einstein hadn’t figured out General Relativity.”

Established in 2014 with a generous donation from the Stony Brook Foundation Board of Trustees in response to a challenge from the Science Philanthropy Alliance, a community of funders who work together to inspire new, emerging and current philanthropists to dedicate a portion of their philanthropy to basic, the Discovery Prize was created to advance pioneering scientific breakthroughs at a time when the federal government support for basic research is dwindling. The “Shark Tank” – meets “Ted Talk” style competition is produced in collaboration with the Alan Alda Center for Communicating Science. The grant is awarded to a Stony Brook University scholar whose ambitious, high-risk, high-reward basic research embraces innovation and has the potential to transform a groundbreaking idea.

Unique to the completion is a “Shark Tank meets Ted Talk” style presentation between the four finalists. Each contestant presented his/her research that easily conveys the significance the work, the scientific approach, and the potential impact of the research in a way a lay audience would understand in just about 10 minutes.

Before the event, they practiced their presentations and were coached by communication experts from  the Alan Alda Center for Communicating Science.  The one-on-one coaching sessions are designed to help each of the scientists more effectively communicate their research to audiences outside the scientific discipline, be it to the public, government officials, the media, and in this specific case for the competition judges and audience.

After the competition the judges deliberated for more than 30 minutes before announcing the winner.

“This was definitely a tough choice, as the competitors presented wonderfully and are involved in fascinating and potentially groundbreaking research,” said Jacak. “We were very intrigued with Thomas Allison’s work because there are so many open questions on how chemistry and molecules work. To make movies that fast of molecules in action is exciting, and we thought the Discovery Prize would be fitting for him to push that research forward.”

“We did have a hard time to select a winner, and we hope all the finalists find ways to have their research funded,” said Haldane. “We thought Thomas Allison’s research stood out because to get a view of molecules in movie form to see how they work is a concrete and powerful concept. We also thought the Discovery Prize could make a real difference for his research to help fund a key piece of equipment and other resources needed to make these molecular movies.”

All of the four finalists – Thomas Allison, Gábor Balázski, Matthew Reuter, and Neelima Sehgal – are early career faculty whose work was selected from 19 proposals submitited for the prize competition. The proposals were reviewed by a panel of SUNY Distingushed Professors who determined the four finalists. Collectively, their work embodies imaginative ideas and solutions to phenomena and problems in science.

Discovery Prize winner Thomas Allison, PhD, Assistant Professor in the Departments of Chemistry and Physics, studies the dynamics of molecules and lasers. Both are extremely important, he explains, in the development of high technologies and many machines used in all areas of science from engineering to medicine. He will present his research titled “Recording Movies of Molecular Orbitals with Angstrom and Attosecond Resolution.”

and the Department of Biomedical Engineering, investigates drug resistance by multiple scientific approaches. He heads an interdisciplinary research group that uses synthetic gene circuits to control genes in yeast and human cells. Using these gene circuits, he and his collaborators hope to understand how genes control fundamental biological processes underlying drug resistance, particularly in the areas of fungal infections and cancer therapies. He will discuss his research in a presentation titled “A New Window to Antibiotic Resistance.”

Professor Balázsk was also named a finalist for the first Discovery Prize in 2014.

Matthew Reuter, PhD, Assistant Professor in the Department of Applied Mathematics and Statistics, and the Institute for Advanced Computational Science, is researching how electrons actually move from point A to point B, a process that has not been fully explained in science. The phenomenon is important because electrons are implicated in many scientific processes and applications. His research focuses on electron dynamics in nanometer-scale systems and combines chemical physics, applied mathematics, and computational science. Professor Reuter will deliver his presentation, titled “Characterizing Non-Equilibrium Dynamics in Quantum Mechanical Systems.”

Neelima Sehgal, PhD, Assistant Professor in the Department of Physics and Astronomy, specializes in researching the cosmos (cosmology) and particularly the origins of the Universe and the Big Bang. She studies the cosmic microwave background, which is the oldest light in the Universe, to learn about the infant Universe. She also investigates the microwave background in order to determine the properties of neutrinos, dark matter, and dark energy. By using telescope observations from the Simons Observatory, projected to be in operation in approximately four years in the Atacama Desert in Chile, and theoretical research, she hopes to determine what happened in a fraction of a second right after the Big Bang.  Her presentation is titled “Unveiling the first Moments of the Universe’s Creation with CMB Delensing and the Simons Observatory.”

How the Discovery Prize has helped the first winner

“The Discovery Prize has provided a tremendous boost to my lab’s research,” she said.  Dr. Krug’s research aims to discover new genes that the gamma herpesviruses need to infect and takeover specific cells. Finding such genes would provide new molecular targets to combat the cancers that gamma herpesviruses promote when they infect cells.

Since then her work has progressed, and she was recently awarded a National Institutes of Health Small Business Innovation Research (SBIR) grant to further her investigation and its potential applications. She also published a research paper, “Gene Delivery to Mammalian Cells using a Graphene Nanoribbon Platform,” in the Royal Society of Chemistry’s Journal of Materials Chemistry B.

“Along with colleagues and my bioengineering collaborator Dr. Balaji Sitharaman, we are moving forward on many fronts with the research. We are nearing our goals to target both host genes and viral genes in the context of infection,” she explained.

About the Discovery Prize

Established with a generous donation from the Stony Brook Foundation’s Board of Trustees in 2013,  the Discovery Prize is used to  advance pioneering scientific breakthroughs at a time when the primary source of support for basic research (i.e., the federal government) is dwindling. It is a pathway to capitalize on new technologies, new innovations, new and imaginative ideas, and the urgency to move discovery driven knowledge forward by investing private dollars in basic research that is free of commercial or political pressures.

The Discovery Prize is also a means to support the career of a rising star on the Stony Brook faculty whose ideas and momentum with their work  may be so revolutionary and so contrary to convention that funding agencies would be unlikely to provide support.