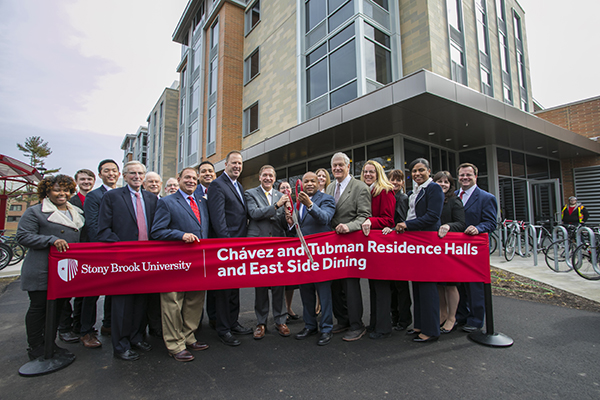 Stony Brook, NY – March 1, 2017— Honoring diversity and emphasizing technology and comfort, Stony Brook University’s newest state-of-the-art student facilities, Chávez and Tubman Residence Halls and East Side Dining, were officially dedicated at a ribbon-cutting ceremony on February 22, 2017. The facilities are equipped to provide a modern and convenient student life experience, as well as a safe and inclusive environment.

“Stony Brook strives to create an environment that welcomes all,” said Stony Brook University President Samuel L. Stanley Jr. “This new complex was designed not simply to house and feed students, but to give them a space where they can engage as part of the Stony Brook community.  We have solidified our position as SUNY’s largest residential campus.”

“Each day as students walk through these doors, I hope they embrace the legacy of these two activists and think how they, too, can be agents for change,” President Stanley said.

The residence halls are designed to support various studying habits, featuring smart lounges for group study, quiet areas and multipurpose rooms, all equipped with high-speed wireless. Laundry lounges on each floor allow students to maximize their study time while doing the wash, and fully equipped kitchens in each building feature booth-style seating.

William Kennedy ’17, President of the Resident Hall Association, praised the new facilities as “a place where you feel safe, and a place to build camaraderie when you have a little time to relax.”

Stony Brook University is going beyond the expectations of what today’s public universities can accomplish. Since its founding in 1957, this young university has grown to become one of only four University Center campuses in the State University of New York (SUNY) system with more than 25,700 students, 2,500 faculty members, and 20 NCAA Division I athletic programs. Our faculty have earned numerous prestigious awards, including the Nobel Prize, Pulitzer Prize, Indianapolis Prize for animal conservation, Abel Prize and the inaugural Breakthrough Prize in Mathematics. The University offers students an elite education with an outstanding return on investment: U.S. News & World Report ranks Stony Brook among the top 40 public universities in the nation. Its membership in the Association of American Universities (AAU) places Stony Brook among the top 62 research institutions in North America. As part of the management team of Brookhaven National Laboratory, the University joins a prestigious group of universities that have a role in running federal R&D labs. Stony Brook University is a driving force in the region’s economy, generating nearly 60,000 jobs and an annual economic impact of $4.65 billion. Our state, country and world demand ambitious ideas, imaginative solutions and exceptional leadership to forge a better future for all. The students, alumni, researchers and faculty of Stony Brook University are prepared to meet this challenge.