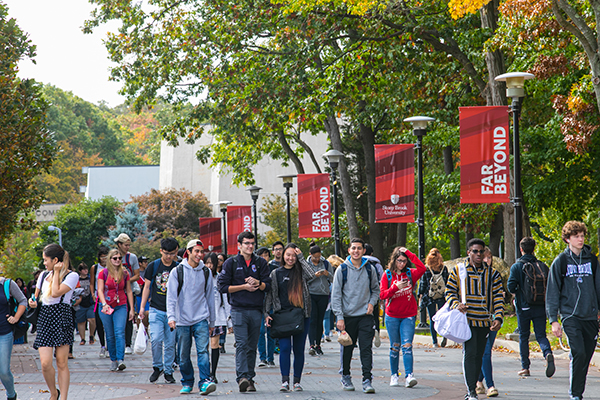 STONY BROOK, NY, January 23, 2017 — A Stony Brook University education provides a proven path toward upward mobility for students from low income households, according to a new study led by the Stanford Institute for Economic Policy Research. Entitled Mobility Report Cards: The Role of Colleges in Intergenerational Mobility, the report ranks Stony Brook among the top 10 colleges and universities in the nation whose students begin college at the bottom fifth of income distribution and then go on to have income in the top three-fifths of income distribution.

“The study is a striking confirmation of Stony Brook’s unique strengths as an engine of social mobility,” said Stony Brook University President Samuel L. Stanley Jr., MD. “We admit the best and brightest students, regardless of economic status, and give them the top-flight education they need for success.

“Stony Brook offers an environment in which a diverse student body is encouraged to thrive, and a wide array of programs – from EOP/AIM to intensive academic counseling – help to facilitate their success. In addition, I give significant credit first to our students for their perseverance; our faculty for their mentorship, academic rigor and guidance; and, the staff in our career counseling services program, who help our students achieve their potential.”

The study tracked 14-years of financial records for college students, age 18-22, at all public and private U.S. colleges and universities from 1999 through 2013. Using de-identified IRS data, researchers compared the reported earnings of college graduates in their early 30’s to their parents’ income during student college years. Researchers examined the percentage of students from each respective institution and found that Stony Brook’s high mobility rate shows graduates reach high income levels within 10 years of graduation. Citing a comparison to Columbia University, the study notes that Stony Brook graduates were shown to have earned incomes “that are nearly comparable,” and that Stony Brook “has a bottom-to-top-quintile mobility rate of 8.4%, channeling nearly 3 times as many children from the bottom to the top of the income distribution as Columbia.”

“Improving access to higher education and minimizing student debt are vital to the role of higher education in economic mobility,” said President Stanley. “Also crucial are programs that ensure that economically disadvantaged students receive the support on campus that they need in order to benefit as fully as possible from a proven engine of economic mobility. I’m proud to say that is a top priority at Stony Brook.”

To read the study in its entirety, click here.

Other external rankings that have highlighted Stony Brook’s success in social and economic mobility include:

Stony Brook University is going beyond the expectations of what today’s public universities can accomplish.  Since its founding in 1957, this young university has grown to become one of only four University Center campuses in the State University of New York (SUNY) system with more than 25,700 students, 2,500 faculty members, and 20 NCAA Division I athletic programs. Our faculty have earned numerous prestigious awards, including the Nobel Prize, Pulitzer Prize, Indianapolis Prize for animal conservation, Abel Prize and the inaugural Breakthrough Prize in Mathematics.  The University offers students an elite education with an outstanding return on investment: U.S.News & World Report ranks Stony Brook among the top 40 public universities in the nation. Its membership in the Association of American Universities (AAU) places Stony Brook among the top 62 research institutions in North America. As part of the management team of Brookhaven National Laboratory, the University joins a prestigious group of universities that have a role in running federal R&D labs.  Stony Brook University is a driving force in the region’s economy, generating nearly 60,000 jobs and an annual economic impact of $4.65 billion. Our state, country and world demand ambitious ideas, imaginative solutions and exceptional leadership to forge a better future for all. The students, alumni, researchers and faculty of Stony Brook University are prepared to meet this challenge.