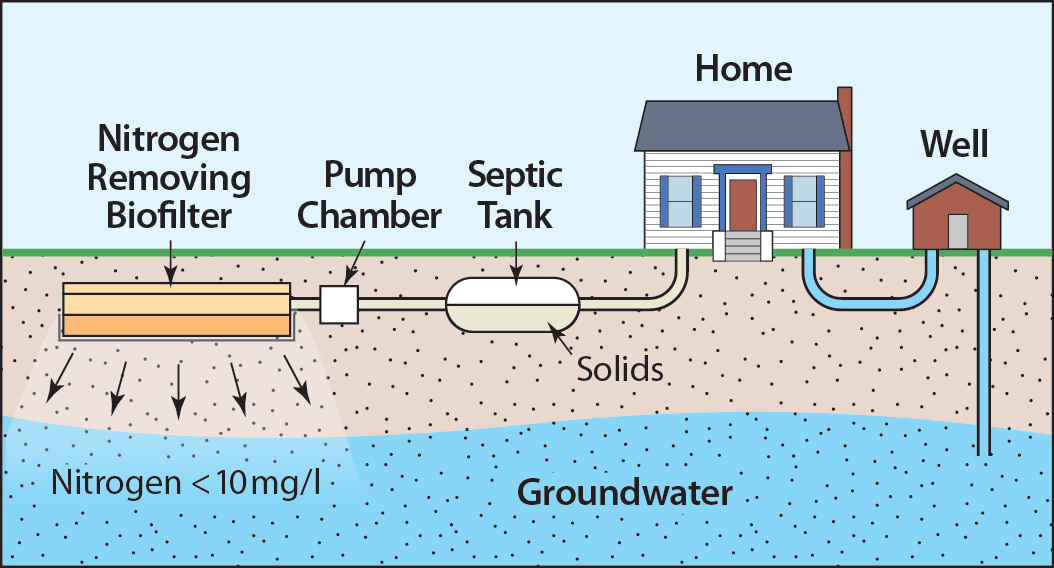 Stony Brook, N.Y., June 21, 2016 – The New York State Center for Clean Water Technology at Stony Brook University issued a white paper introducing a potential replacement for Long Island cesspools that has shown an ability to remove high amounts of nitrogen from household wastewater, a contaminant identified as the primary cause of local water quality degradation on Long Island.  The system incorporates simple design with locally-sourced, natural materials in order to position it as an economically viable alternative for high performance onsite wastewater treatment, a crucial infrastructure need for restoring Long Island water quality.  Pilot installations of the system are underway at a test center, and scheduled to begin locally by early fall as part of the Suffolk County Department of Health Services demonstration program for innovate/alternative septic treatment systems.

“These simple systems comprised of sand and finely ground wood are demonstrating an ability to treat household wastewater as well or better than the most advanced wastewater treatment plants,” said Dr. Chris Gobler, Center Co-Director and Associate Dean for Research and Professor at the School of Marine and Atmospheric Sciences at Stony Brook University. “Similar in footprint and basic functionality to a drain field, the most common form of onsite wastewater dispersal around the country, we call them Nitrogen Removing Biofilters (NRBs), and the next step is to pilot them at residences to see if they can consistently perform in more dynamic situations,” he added.

“Beyond the high nitrogen removal rates these systems are achieving in test scenarios, they are also showing highly efficient removal of most pharmaceuticals and other personal care products. Additionally, they are passive systems by design, which means they are low maintenance and require little energy to operate,” said Dr. Harold Walker, Center Co-director and Professor and Chair of the Department of Civil Engineering in the College of Engineering and Applied Sciences at Stony Brook University.

The science behind the non-proprietary system, as well as the history of its development, is detailed in the white paper, which is available at stonybrook.edu/cleanwater.  Walker and Gobler also underscored the collaborative nature of the Center’s work on the approach, which has involved engaging leading experts from the public and private sectors, including Suffolk County Department of Health Services and the NYS Department of Environmental Conservation, to design the optimal system configurations to pilot on Long Island.

The NRB is one of several treatment approaches the Center is pursuing with the goal of providing affordable, high-performance technologies suitable for widespread deployment on Long Island.  The promise of the NRB, a form of passive treatment, was underscored by a technology assessment report recently completely for the Center by the NY-based engineering firm Hazen and Sawyer.

The full results of the technology assessment report, and the details on the Center’s strategic plan and research investments will be presented at a Symposium on June 23rd at Stony Brook University.

Background
Funded in 2015 by the New York State Environmental Protection Fund as administered by the NYS Department of Environmental Conservation, along with Bloomberg Philanthropies, the Center for Clean Water Technology is leading an initiative to marshal the region’s public and private resources to develop and commercialize water quality restoration and protection technologies, focusing first on more affordable and effective solutions for removing nitrogen and other contaminants discharged into groundwater by some 360,000 individual septic systems in Suffolk County.

A venture lead jointly by the Stony Brook University School of Marine and Atmospheric Sciences and the College of Engineering and Applied Sciences, the Center is headquartered in the Stony Brook Research and Development Park.

Senator Ken LaValle, who was instrumental in obtaining funding for the Center said, “Protecting our water supply and keeping our waters pristine is critically important for all of Long Island.  I am pleased to see that the state investments we made in the Center for Clean Water are already showing great progress.  The release of this initial “White Paper” by the Center illustrates the type of research that is crucial to developing the most cost effective means for eliminating contaminates from our groundwater.  I look forward to working together with the Center to identify new, innovative clean water technologies for Long Island.”

New York State Assemblyman Fred W. Thiele, Jr., who was instrumental in obtaining funding for the Center stated, “The Stony Brook Center for Clean Water Technology is at the forefront of developing and utilizing effective and affordable on-site wastewater treatment systems with advanced nitrogen removal capabilities. This effort and these finding are particularly important for addressing Long Island’s water quality crisis.”

“Suffolk County government is engaged in an historic, science based-transition away from the cesspools and septics that have contributed to deteriorated water quality, to systems that will better protect water quality” said Suffolk County Executive Steve Bellone. “The Center for Clean Water Technology was created for the specific purpose of identifying technologies that are both more effective and less costly than those that are currently available.  Pilot testing of NRB technology in warmer climates has been encouraging, and we will be anxious to review the results of testing here in Suffolk.”

“This technology is among the most promising we’ve seen in Long Island’s effort to restore water quality,” said Richard Amper, Executive Director of the Long Island Pine Barrens Society.

“This novel technology is game-changing for the evolution of how we remove nitrogen pollution from residential wastewater,” said Chris Clapp, marine scientist for The Nature Conservancy on Long Island.  “The system is both simple and efficient; with, potentially, a transformative impact on our regional waste water management,” he said.