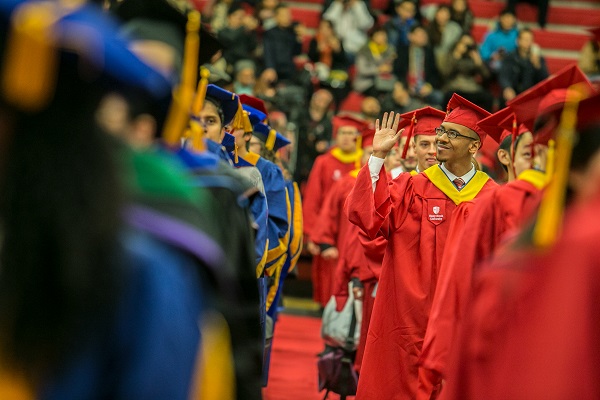 Stony Brook University President Samuel L. Stanley Jr.  paid tribute to the diversity and the welcoming climate of Stony Brook, stating, “the extraordinary diversity, both from our students from the US, and from our very strong international students, creates a unique environment. Stony Brook is not a University where everyone looks the same, has the same religious or ethnic background, sexual orientation, ability, or socioeconomic background. And we celebrate that diversity because it makes us stronger.”

“In these tumultuous times, I hope you will use your Stony Brook education, not just the remarkable academic components, but your experiences in working and living side by side with some amazing people, to help create a welcoming, inclusive, and productive environment wherever you go,” Dr. Stanley said.

Senator Charles E. Schumer (D-NY) addressed the graduating class, urging them to follow their dreams.  “My advice to the Class of 2016 is simple: go for it,” Sen. Schumer said.


For more information visit, https://www.stonybrook.edu/commcms/commencement/
###
About Stony Brook University
Part of the State University of New York system, Stony Brook University encompasses 200 buildings on 1,450 acres. Since welcoming its first incoming class in 1957, the University has grown tremendously, now with more than 25,700 students and 2,500 faculty as well as over 175,000 alumni worldwide. Its membership in the prestigious Association of American Universities (AAU) places Stony Brook among the top 62 research institutions in North America. U.S. News & World Report ranks Stony Brook among the top 100 universities in the nation and top 50 public universities, and Kiplinger names it one of the 35 best values in public colleges. One of four University Center campuses in the SUNY system, Stony Brook is part of the management team of Brookhaven National Laboratory, putting it in an elite group of universities that run federal research and development laboratories. The Center for World University Rankings lists Stony Brook in the top 1 percent of institutions worldwide. It is one of only 10 universities nationwide recognized by the National Science Foundation for combining research with undergraduate education. As the largest single-site employer on Long Island, Stony Brook is a driving force of the regional economy, with an annual economic impact of $4.65 billion, generating nearly 60,000 jobs, and accounts for nearly 4 percent of all economic activity in Nassau and Suffolk counties, and roughly 7.5 percent of total jobs in Suffolk County.