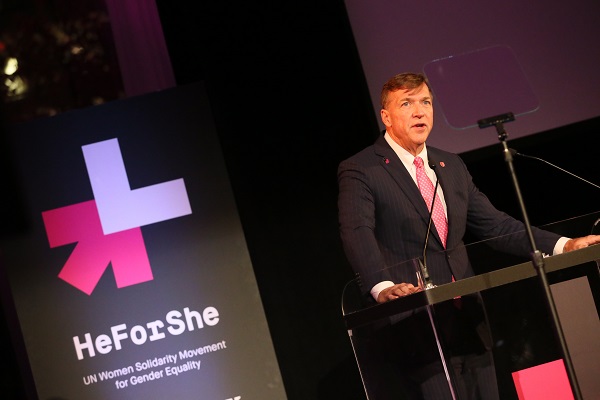 The events were kicked off with the launch of the first HeForShe IMPACT 10x10x10
University Parity report, which is the first progress report since 10 leading global universities publicly announced bold commitments to achieve gender parity in academia by 2020. President Stanley is one of 10 university presidents worldwide (and one of two in the U.S.) designated as a HeForShe IMPACT 10x10x10 champion, committing to take bold game-changing action to achieve gender equality within and beyond their institutions. Implementing HeForShe at Stony Brook and among the 64 SUNY campuses throughout New York State is helping to shape the experiences of more than 459,000 students and almost 90,000 faculty and staff, giving Stony Brook University an unprecedented reach to effect positive change.

“Stony Brook University is committed to be the national leader — a model in gender equality in the United States for colleges and universities,” said President Stanley. “That is why we are so invested in HeForShe. It provides a visionary and sound foundation from which we can all work together to improve the human condition through the achievement of gender equality.”

In the Stony Brook section of the University Parity report, President Stanley highlights progress made thus far, including:

The evening reception, held at the Museum of Modern Art in New York City, was co-hosted by

And included the following guests:

Speaking at the HeForShe anniversary celebration at MOMA, President Stanley said universities are central to this process because they are the cradles of tomorrow’s leadership.

“It gives me great satisfaction on a daily basis to meet and work with students and scholars who are finding ways to surmount those obstacles as they look toward a more promising future,” he said.

The HeForShe global solidarity movement for gender equality, commemorated the anniversary with bold commitments, powerful stories of change, and new narratives about what it means to be HeForShe.

“HeForShe was launched in the conviction that we needed to find the right way for men to get involved in changing the status quo,” Phumzile Mlambo-Ngcuka, UN Under-Secretary-General and Executive Director of UN Women said. “Last night’s activists have shown us how together we really can get rapid,
incremental results that benefit both women and men. Their work will open new opportunities that reinforce each other in schools, workplaces and wider communities. Millions of men and boys have already signed up for gender equality and now we need to get the next 1 million on board.”

Showcasing stories of global activists, the MoMA event renewed momentum to create a gender equal world by or before 2030. Highlights from the night included stories about the impact of outlawing child marriage and sending girls back to school in Malawi; how HeForShe IMPACT scholarships are creating more opportunities for girls in the STEM fields; and what happens when college fraternity brothers unite to stop sexual assault. Celebrity activists like Emma Watson and Edgar Ramirez shared their personal stories and explored the universal nature of gender equality.

which aims to mobilize one billion men and boys in support of gender equality.

“The reason I have shared my personal journey is that though this is a global movement, it is each of our personal stories and what we choose to do that will make a global difference,” said UN Women Goodwill Ambassador
Emma Watson at the event. “And at this moment in history, there is a unique opportunity and energy for us to win change all over the world.”

“There has long been a misconception that gender equality is a women’s movement,” said
Actor Edgar Ramirez
. “But gender equality is actually about just that –equality. It is a liberation movement for each and every person that has ever felt the burden of a gender stereotype or the pain of discrimination or the pressure to fit into an uncomfortable mold
.”

“Ever since Stony Brook made the HeForShe commitment, conversations have skyrocketed, and that’s where HeForShe’s power lies as a movement on college campuses,” said
Bridget Foley
‘17, an Environmental Humanities major. “Now that HeForShe has a presence at the University, my peers and colleagues are curious about, or at least aware of,  gender inequality, and that makes cultivating the necessary discussions so much easier.”

“It is so exciting to celebrate the second anniversary of the launch of HeForShe,” said
Charles L. Robbins
, SUNY UN Women HeForShe Coordinator, Vice Provost for Undergraduate Education and Dean of the Undergraduate Colleges at Stony Brook University. “As one of only 10 Impact Universities globally Stony Brook University is engaged in addressing gender equality on our campus, within the SUNY system and the world. I am so proud of what we have done and the potential of what we are committed to accomplish.”

“Getting involved with the HeForShe movement has been an amazing experience for me as it has allowed me to meet and connect with people who are willing to fight for equal human rights. I believe that supporting feminism  is supporting basic human rights,” said Saba Khalid ’17, a Biomedical Engineering major.

About Stony Brook University
Part of the State University of New York system, Stony Brook University encompasses 200 buildings on 1,450 acres. Since welcoming its first incoming class in 1957, the University has grown tremendously, now with more than 25,000 students and 2,500 faculty. Its membership in the prestigious Association of American Universities (AAU) places Stony Brook among the top 62 research institutions in North America. U.S. News & World Report ranks Stony Brook among the top 100 universities in the nation and top 50 public universities, and Kiplinger names it one of the 35 best values in public colleges. One of four University Center campuses in the SUNY system, Stony Brook co-manages Brookhaven National Laboratory, putting it in an elite group of universities that run federal research and development laboratories. A global ranking by U.S. News & World Report places Stony Brook in the top 1 percent of institutions worldwide.  It is one of only 10 universities nationwide recognized by the National Science Foundation for combining research with undergraduate education. As the  largest single-site employer on Long Island, Stony Brook is a driving force of the regional economy, with an annual economic impact of $4.65 billion, generating nearly 60,000 jobs, and accounts for nearly 4 percent of all economic activity in Nassau and Suffolk counties, and roughly 7.5 percent of total jobs in Suffolk County.

About HeForShe
Created by UN Women, the HeForShe solidarity movement for gender equality provides a systematic approach and targeted platform on which men and boys can engage and become change agents towards the achievement of gender equality. HeForShe invites men and boys to build on the work of the women’s movement as equal partners, crafting and implementing a shared vision of gender equality that will benefit all of humanity. For more information, visit http://www.heforshe.org/en