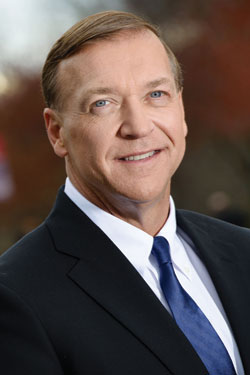 Stony Brook University President  Samuel L. Stanley Jr., has been elected to serve on the  NCAA Board of Governors, the highest governance body in the NCAA.

The National Collegiate Athletic Association (NCAA) is a non-profit organization that regulates sports competition and athletes at higher education institutions nationwide. The Board of Governors is composed of institutional chief executive officers that oversee Association-wide issues.

The board is charged with ensuring that each division operates consistently with the basic purposes, fundamental policies and general principles of the Association. President Stanley will be one of  20 members on the Board of Governors. His appointment is effective immediately and continues through August 2018.

“I feel honored to have been elected to serve on the NCAA Board of Governors,” said President Stanley. “I look forward to working alongside leadership from all three NCAA divisions to discuss critical issues and to take action together to preserve and enhance student athlete success and well-being across the country.”

“I’m thrilled that President Stanley was selected for this coveted and critical role within the NCAA structure,” said America East Commissioner Amy Huchthausen. “The rise of the America East over the past few years is due in large measure to the values, principles and ideas for growth President Stanley has had at his institution and within our conference.”

The NCAA was established to protect student-athletes and now oversees 89 championships in 23 sports. With nearly 350 colleges and universities in its membership, Division I schools field more than 6,000 athletic teams, providing opportunities for more than 170,000 student-athletes to compete in NCAA sports each year.  The America East provides its member schools and their athletic programs a platform upon which student-athletes can achieve both collegiate and life success through the promotion and nurturing of athletic excellence, academic achievement and leadership, on and off the field.