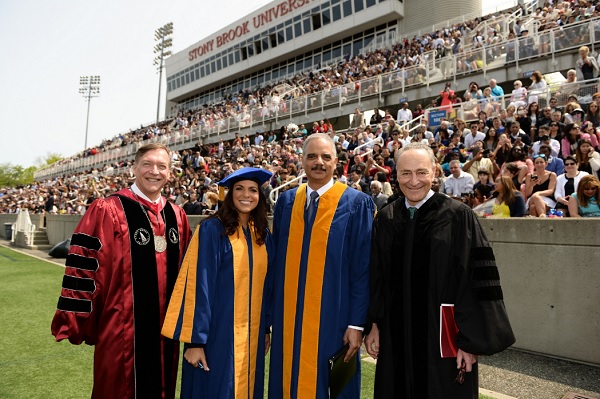 STONY BROOK, NY, May 20, 2016 – At Stony Brook University’s 56th commencement ceremony today at Kenneth P. LaValle Stadium, 6,686 students had their degrees conferred joining more than 160,000 alumni from around the globe whose lives and work personify what Stony Brook embraces — the relentless pursuit of excellence and commitment to make a real difference. Graduates span 67 countries, 41 states and range in age from 20to 73.

Eric H. Holder, Jr., the 82nd Attorney General of the United States, and Soledad O’Brien, award-winning journalist and Long Island native, were at Stony Brook to receive their honorary degrees – a Doctor of Law and Doctor of Letters, respectively – and speak to their fellow Seawolves.

Holder, who was accepted by Stony Brook for undergrad but chose Columbia “because it was closer” to his family home in Queens, thanked the new graduates for allowing him to celebrate with them, and encouraged them to rededicate themselves for the fight for fairness and justice that should always be at the center of the American experience.

“There is always a way to serve,” Holder said. “Find the time. Find the program. Find the cause. Find the way to improve our country and the lot of your fellow citizens. I am confident that you will meet your responsibilities, exceed your expectations, and help to transform our nation – and this world – for the better.”

O’Brien also thanked the graduates for sharing the moment with her, reminisced about her time spent on campus when her father, Edward O’Brien, was a professor and spoke of the important role that the Class of 2016 has after graduation.

“Today you begin new and amazing things and you have the power to create change that impacts real people…it’s not a responsibility to take lightly,” said O’Brien. “Lean In, as Sheryl Sandberg likes to advise. That’s not just a strategy for women in business…it’s advice for everyone…I would add lean in and use your voice; lean in and make a change where it’s needed; and lean in and invest your heart and soul in ideas and in people that others may not care for at all.”

During his commencement speech, Stony Brook University President Samuel L. Stanley Jr. spoke of the value of a Stony Brook degree, noting that Stony Brook University is ranked the #1 public school in the Northeast for return on investment, with increased earnings of approximately $1 million for in- and out-of-state students. He emphasized the school’s mission to provide the highest quality education and access to the best research facilities and faculty and expressed the promise to enhance the value of their education even after graduation.

He also spoke directly to the students and said, “We have great expectations for the Class of 2016. After all, the success of our alumni is one of the seminal ways by which we are defined as a University.  Your successes, your accomplishments, your good works, are an integral part of how the world views us, and a fundamental measure of our effectiveness as a University.  So class of 2016, we are pulling for you, I know you won’t let us down.”

Ruchi Shah, a member Stony Brook University and Stony Brook School of Medicine. Ruchi is a 4.0 student, CEO of her own company working to market an all natural mosquito repellant designed to fight mosquito borne illnesses in third world countries, a nationally recognized cancer researcher and a journalist published on a national news network. Ruchi was also recently picked as one of Glamour magazine’s 10 College Women of the Year.

Mike Bleidistel, a United Marine Corps veteran, received a Bachelor of Health Science. During his time at Stony Brook he joined Port Jefferson EMS as an EMT to continue to help those in need, and became a research assistant in the Stony Brook University Hospital Department of Psychiatry to advance knowledge and evidence-based practice in the

field of medicine. Michael states that the top-tier education received at Stony Brook not only enabled him to thrive while serving the community and advancing knowledge, but also led to his acceptance into Drexel University College of Medicine.

Danielle Meyers, an EOP/AIM student, received a Bachelor of Social Work. Danielle has served as a Student Leader Intern with the Stony Brook University Freedom School for the past two years. Based on her academic and personal success, Danielle was identified by the state as a role model for other foster youth and was selected as a Youth Ambassador for the At Risk Youth College Access Challenge Grant Program.

“This year our students also brought smiles to sick children through programs like Project Sunshine and Camp Kesem, took alternative spring break outreach trips to repair flood damage in Colorado, to build habitat for humanity houses in Florida and to work in food banks in Tennessee.  And in this election year, they partnered with the Vote Everywhere Project to register nearly 3,500 Stony Brook students to vote, more than any other Vote Everywhere college or university in the country!”

Meyers was also selected to be the student speaker by a committee of staff and faculty from a pool of submitted speeches provided through the annual senior speaker competition. During her speech, written in the form of a “spoken word” poem — her specialty — she reminded graduates, “that although we will all take on different career paths in life, what makes us all the same is that we have become graduates of one of the nation’s top universities in the

country. That alone brings us all together today despite our individuality.” Meyers will continue her education at Stony Brook University’s School of Social Welfare when she begins the Master of Social Work program in the fall.

Provost Assanis also announced Elizabeth Hermitt and Jeffery Augugliaro as recipients of the H. Lee Dennison Valedictorian Award, named in honor of Suffolk County’s first chief executive and presented to the graduating senior or seniors who entered Stony Brook as a transfer student, completed at least 60 credits of letter-grade work at Stony Brook and attained the most outstanding academic record in that work.

Finally, on behalf of the Class of 2016, Senior Class Representative Drazen Bacarra presented President Stanley with the Senior Class Gift of $4,454.63 to benefit Stony Brook University Children’s Hospital. This gift adds to the $250,000 Stony Brook students have raised the past 10 years to support a variety of areas that touched their lives including their individual departments, colleges or to one of variety of other University priorities like the Student Scholarships.