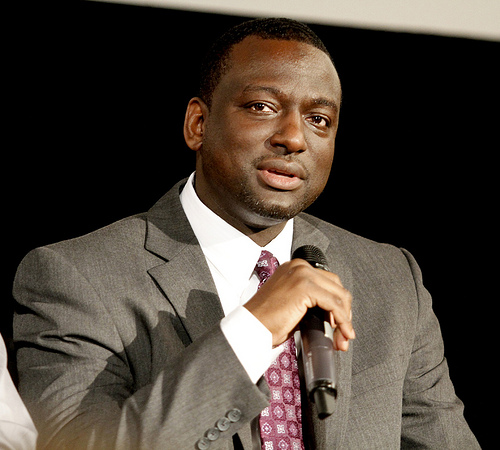 STONY BROOK, NY, February 18, 2016 – Stony Brook University will celebrate its Black History Month closing event on Feb. 24, 2016 by commemorating and acknowledging the accomplishments of two black leaders and pioneers. Keynote speaker, Yusef Salaam, a member of the award winning film, “The Central Park Five”, will share his story of resiliency and triumph. Will Tye, Tight End for the New York Giants, will be honored for his accomplishments as the first Stony Brook football player to join the NFL. The event will be held at the Student Activities Ballroom A from 8 – 11 p.m. and is open to the Stony Brook University community and their guests.

At the closing ceremony, there will also be live performances and presentations from Stony Brook student groups and organizations.

Yusef Salaam is a leader, motivator and thinker who is a proponent of social justice. He is also one of the teens falsely accused and convicted of raping the “Central Park Jogger.”

Will Tye is a Tight End for NFL’s New York Giants. Tye signed with the New York Giants for the 2015 season and scored his first NFL touchdown during a win over the Miami Dolphins on Dec. 14, 2015. At Stony Brook, Tye played in 23 games with 18 starts in two seasons after transferring from Florida State. His 2-year totals were 79 catches for 1,015 yards and 9 touchdowns. Tye is originally from Middletown, Conn.

Black History Month at Stony Brook University
Throughout Black History Month, Stony Brook University has provided a number of educational, cultural and historical events that celebrated the theme, “Sankofa: Together We Will Rise.” The concept of Sankofa has its origin in Ghana, West Africa and, when translated, means “it is not taboo to go back and fetch what you forgot.”

The Black History Month Opening Ceremony is coordinated by the Office of Multicultural Affairs and the Black History Month Committee. For a current calendar of events visit, https://www.stonybrook.edu/blackhistory. All events are open to the Stony Brook University community and their guests.