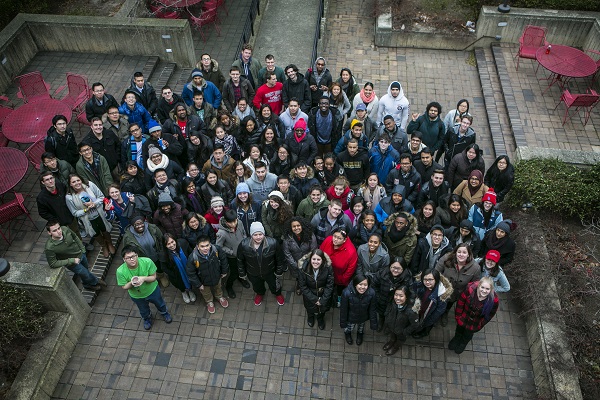 STONY BROOK, N.Y., January 22, 2016 – Stony Brook University is serving students the recipe for success by providing valuable employment opportunities on campus, preparing them for life after college. Turning up the heat is Stony Brook’s Campus Dining (CD), whose student payroll wages increased by 32 percent and employment increased by 22 percent in 2015/2016 over the year prior.

Students work an average of 22 hours each week and hold various positions that go beyond the kitchens and dining locations. They work in marketing, social media, event planning and web, and often interact directly with managers, chefs, University personnel and the public.

“Five internships, two jobs, one degree and various projects later, I look back on my time with Campus Dining, and I cannot be more thankful for all I have experienced,” said Alexander Langstrand, a former student manager at Roth Regatta Cafe. “I have learned how to conduct myself in a professional manner; improving my public speaking abilities, refining my organizational skills, and overall, becoming a more confident individual.” Langstrand, a Lindenhurst, NY resident, is currently student teaching at the Longwood Central School District.

“Working for Campus Dining has allowed me to improve my communication skills with customers, staff, and teammates, all while giving me the freedom to use my creativity and experience to work towards a common goal,” explained David Golden, a CD marketing intern and business marketing major who plans to graduate in May 2017.

Research from the U.S. Bureau of Labor Statistics confirms that part-time campus jobs not only raise cash but can help raise students’ grade-point averages. CD student employees collectively earned $663,912 – earning a competitive average wage of $9.40 per hour – and maintained an average 3.27 GPA during the fall 2015 semester.

“We applaud Campus Dining for taking this approach as these student employees will develop transferrable skills that can apply in a variety of work environments and position students for career-relevant internships and full time jobs,” said Marianna Savoca, Director of the Career Center at Stony Brook. “The Career Center works with hundreds of employers from every industry sector — they want candidates with workplace skills and experience — and that’s what our Student Employment Program aspires to create.”

Success Story: From Stony Brook Student To Stony Brook Employee
Kareema Charles is an example that a student position at Stony Brook can lead to a full-time job. After graduating from Stony Brook University with a degree in journalism, Charles was hired to serve as a management trainee helping to produce
The Seawolves Food Show
, an online video series developed by the University’s Faculty Student Association in collaboration with journalism students to help the campus community learn more about CD programs.

“I never imagined that my student job would turn into a full time position after graduation,” said Charles. “Stony Brook’s School of Journalism gave me all the skills I needed for my current position, while the University’s Faculty Student Association gave me the opportunity to use those skills in a real world setting. Stony Brook made the transition from college life into every day work life really easy!”

Prior to graduation, Charles worked as a student producer for
The Seawolves Food Show.


Fast Facts by the Numbers: