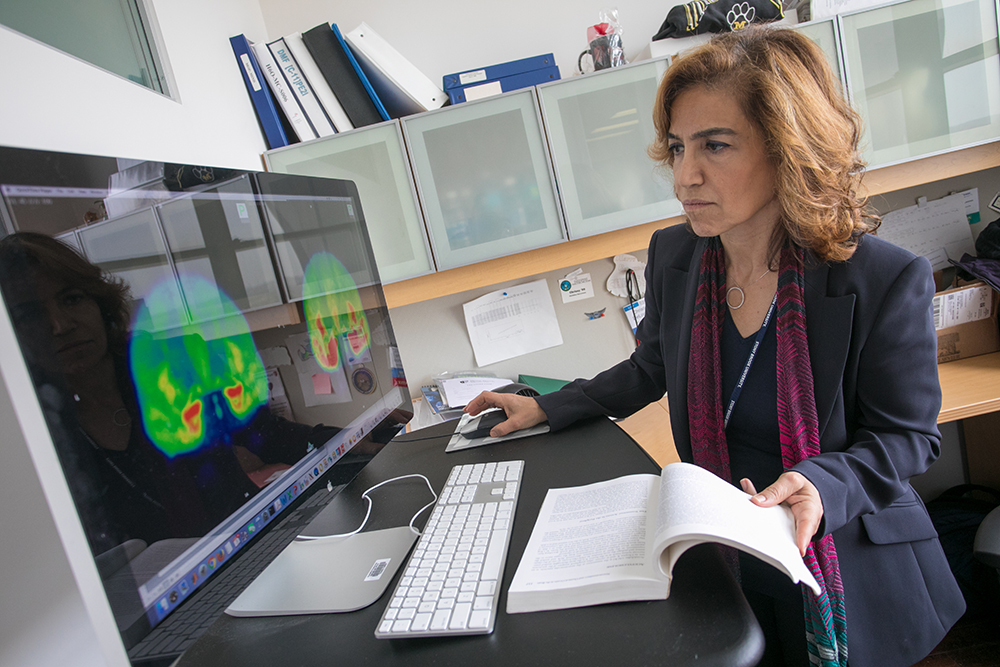 Stony Brook, NY, November 7, 2016 – Anissa Abi-Dargham, MD, Professor and Vice Chair of Research for the Department of Psychiatry at Stony Brook University, has been elected to the National Academy of Medicine (NAM). Becoming an elected member of NAM is considered one of the highest honors in the field of health and medicine and recognizes individuals who have demonstrated outstanding professional achievement and commitment to service in their field.

Dr. Abi-Dargham joins current Stony Brook University School of Medicine faculty Kenneth Kaushansky, MD, Dean of the School and Senior VP for the Health Sciences; and Dennis Choi, Chair of the Department of Neurology and Director of the Neurosciences Institute, as members of NAM. Previously, only three other Stony Brook faculty were elected to NAM – Drs. Daniel Fox, Christina Leske and Nora Volkow. Dr. Abi-Dargham is among the leading physicians and researchers around the world elected as 2016 NAM members.

Dr. Abi-Dargham is an expert in the areas of molecular imaging, pharmacology, schizophrenia and addiction. She uses Positron Emission Tomography (PET) imaging to study the neurobiology of these disorders. Her research has resulted in seminal findings describing the complex alterations of dopamine transmission in schizophrenia and their relationship to clinical symptoms, cognition and response to treatment.

At Stony Brook, Dr. Abi-Dargham aims for her research to advance our understanding of the neurobiology of severe mental illness, and she plans to use novel therapeutics for treatment of comorbidity and resistance. She is building a multidisciplinary team with expertise in neurocomputational and neurocognitive disciplines.  As Vice Chair of Research in the Department, she oversees all research endeavors, with particular emphasis on translational multimodal imaging research and collaborations across disciplines, and mentors faculty and students.

“Dr. Abi-Dargham is a tremendous addition to our faculty and brings excellence to our research, education and our clinical missions,” said Ramin Parsey, MD, PhD, Chair of the Department of Psychiatry. “She is a leader nationally in brain imaging and psychopharmacology of schizophrenia and substance use disorders. We anticipate that her contributions to science will be magnified by utilizing the tremendous resources Stony Brook has put into imaging technologies.”

Born in Beirut, Lebanon, Dr. Abi-Dargham received her MD degree from Saint Joseph’s University. She moved to the US in 1985, completed her residency at the University of Tennessee in Memphis, Tenn., and followed that with a research fellowship at the National Institute for Mental Health. She then joined the faculty at Yale University, and Columbia University after that in 1996, where she has since spent most of her career. She retains an appointment as Professor Emerita of Psychiatry at Columbia University. Dr. Abi-Dargham joined Stony Brook in July 2016.

Dr. Abi-Dargham is a Past President of the Brain Imaging Council for SNM, President-Elect for the American College of Neuropsychopharmacology and serves on the scientific boards of the Schizophrenia International Research Society, the Brain and Behavior Research Foundation and Research Forum.  She is also a member of the NIMH Board of Scientific Counselors and is Associate Editor for Neuropsychopharmacology and Deputy Editor for Biological Psychiatry.