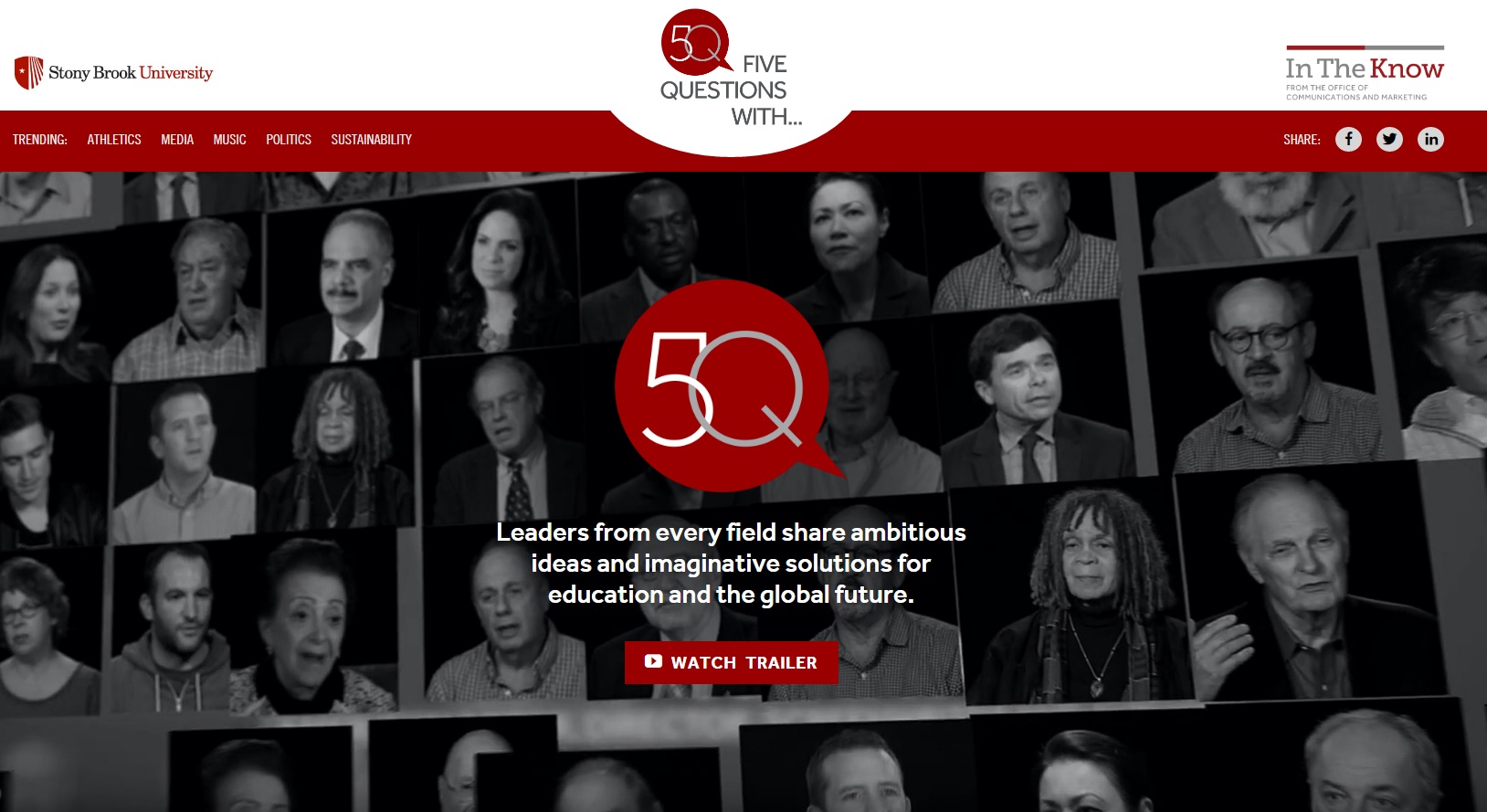 reveals that the first time he realized how much he loved performing was when he was in third grade and sang “Hound Dog” on his school stage to the delight of fourth grade girls.
Ann Curry
discusses what it was like being the first in her family to go to college and her introduction to a campus environment.
Richard Leakey
recalls his first important fossil discovery as a 4-year-old. And Pulitzer Prize-winning cartoonist

Jules Feiffer recalls how the Army changed his life and influenced his decision to become a satirist.

These four distinguished individuals chose to recount these transformative experiences not for “Access Hollywood,” “TMZ,” or People. Rather they are among 40 notables participating in a new web-based video series called “
5 Questions With
” produced by Stony Brook University on Long Island in New York. On Thursday, October 27, Stony Brook will launch the series featuring exclusive, thought-provoking video interviews with these luminaries who have achieved worldwide prominence in their fields and have visited the campus to speak at student and community enrichment events and activities.

In interviews in which each nationally and globally recognized thought leader is asked a similar set of questions, they reveal intimate, little-known details about their formative experiences, inspirations, mentorship, career discoveries and personal insights on how higher education impacts the global future. The site, stonybrook.edu/5questions/, offers intuitive navigation that enables the user to browse interviews sequentially or by topic. One-click sharing allows instant dissemination via social media. A subscription box permits users to sign up for notifications as new videos appear.

​“As a leading research University, Stony Brook offers our students a multitude of experiences that help influence their life and career choices,” said Stony Brook University President Samuel L. Stanley Jr. “This series provides our students with a behind-the-scenes look at how distinguished luminaries arrived at the choices that got them to where they are today, and who helped them reach their current career pinnacle. Their stories are inspirational and I am so pleased they decided to share them with the Stony Brook University community.”

The series will launch with a trailer and a website featuring 19 of the 40 videos that have been collected during the past 18 months, including those featuring
Rukmini Callimachi, Eric Holder, Sonia Sanchez
and President Stanley
. In December, and every month thereafter, the University will release two-to-three new videos featuring others, among them Michael Rezendes, Phumzile Mlambo-Ngcuka, Carl Safina, Will Tye and Roger Rosenblatt.

The series was conceived when Stony Brook’s Marie Colvin Center for International Reporting invited Emmy Award-winning broadcast journalist Ann Curry as a featured speaker, and the Office of Communications and Marketing was seeking a way to extend the impact of her visit beyond the one-hour talk.

“As our team continued to promote the many distinguished luminaries that were coming to campus, we wanted to broaden their influence beyond the ‘moment in time’ of their presence here,” said Nicholas Scibetta, Vice President for Communications and Marketing and Chief Communications Officer at Stony Brook. “We are opening a window into the lives of successful professionals from diverse fields who have shared formative experiences, career discoveries and insights on how specific moments and experiences guided them along their path in life, and how college and career experiences enriched and shaped them.”


Watch all 19 videos and subscribe for new video releases at stonybrook.edu/5questions/.

Part of the State University of New York system, Stony Brook University encompasses 200 buildings on 1,450 acres. Since welcoming its first incoming class in 1957, the University has grown tremendously, now with more than 25,700 students and 2,500 faculty. Its membership in the prestigious Association of American Universities (AAU) places Stony Brook among the top 62 research institutions in North America. U.S. News & World Report ranks Stony Brook among the top 100 universities in the nation and top 50 public universities, and Kiplinger names it one of the 35 best values in public colleges. One of four University Center campuses in the SUNY system, Stony Brook is part of the management team of Brookhaven National Laboratory, putting it in an elite group of universities that run federal research and development laboratories. The Center for World University Rankings lists Stony Brook in the top 1 percent of institutions worldwide.  It is one of only 10 universities nationwide recognized by the National Science Foundation for combining research with undergraduate education. As the largest single-site employer on Long Island, Stony Brook is a driving force of the regional economy, with an annual economic impact of $4.65 billion, generating nearly 60,000 jobs, and accounts for nearly 4 percent of all economic activity in Nassau and Suffolk counties, and roughly 7.5 percent of total jobs in Suffolk County.​