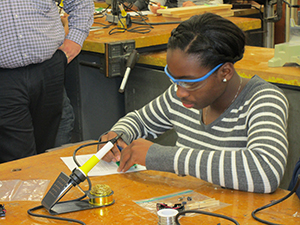 “This program supports National Grid’s Engineering Our Future initiative, designed to inspire youth and attract and develop engineers,” said Mauri Myers-Solages, Corporate Citizenship Manager of National Grid. “We, along with other utilities across the country, are facing a looming shortage of engineers so it makes sense for us to work with Stony Brook University in developing the next generation of talent needed to help support the nation’s energy delivery system,” she added.

This effort, led by Dr. Mónica Bugallo, Faculty Director of the Women and Science and Engineering (WISE) Program and Associate Professor from

the Department of Electrical and Computer Engineering, and Dr. Angela Kelly, Associate Director of the Science Education Program and Associate Professor from the Physics and Astronomy Department, offers after school hands-on engineering activities for high school students, as well as professional development for in-service teachers on engineering learning and workshops on STEM for school counselors. The program focuses on high needs schools and underrepresented groups.

During the academic year 2015-2016, the after school program for students was successfully piloted at Central Islip School District. “The Stony Brook program has been fantastic.  Our students are emulating your skills, work ethic and drive; through exposure to them and the PhD students.  We have improved our sciences with your help so greatly that of the 30 top students – 25 stated they were following careers in the sciences; most in health sciences in particular,” said Dr. Craig Carr, Superintendent, Central Islip UFSD.

“Stony Brook University has a rich tradition of outreach and partnerships with K-12 schools throughout Southeastern New York,” said Keith Sheppard, Director of the Stony Brook Institute for STEM Education. “The Next Generation Engineering Programs will develop innovative opportunities to attract a diverse talent pool of scientists, mathematicians, and engineers.”
About Stony Brook University