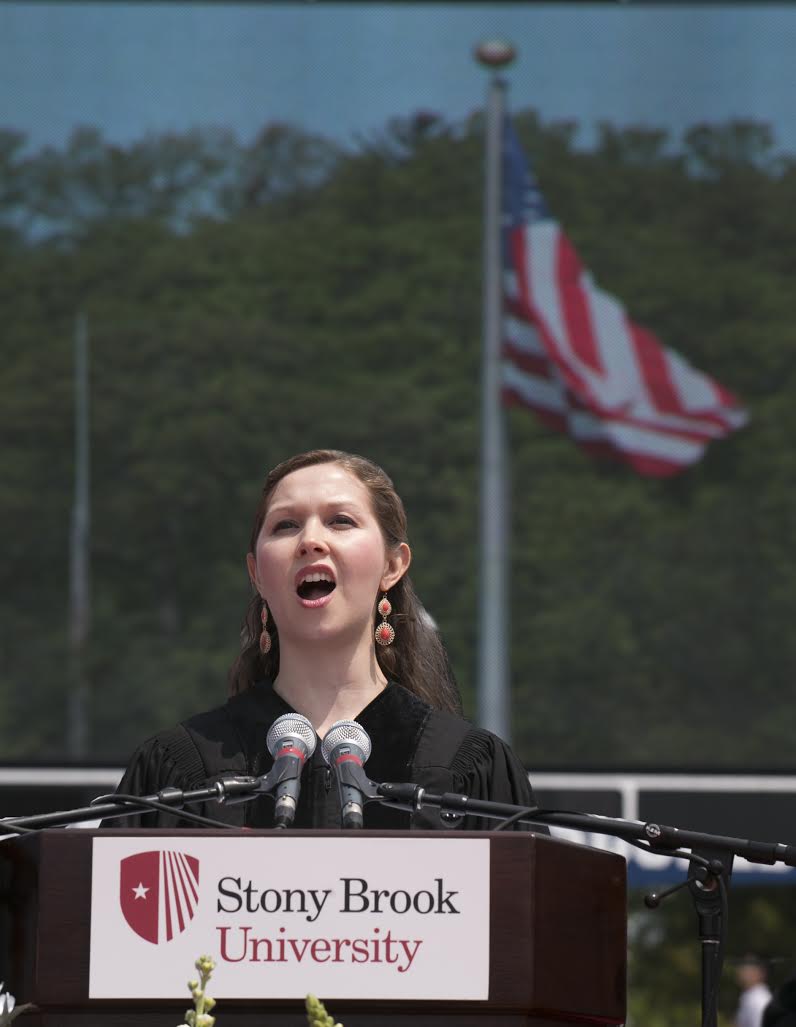 ‘07 a Doctor of Musical Arts (DMA) student  in the College of Arts & Sciences at Stony Brook University and critically acclaimed performing artist, won first place at the

Schutz was accompanied by pianist Jonathan Korth ‘08, a Stony Brook DMA alumnus and her husband.

Schutz won $5,000 cash, a New York solo debut in a major choral work with orchestra and chorus sponsored by Distinguished Concerts International New York; a $4,000 Scholarship to attend the American Institute of Musical Studies (AIMS) in Graz, Austria; a $1,000 gift certificate from Hal Leonard Corporation; and a solo recital at the next NATS National Conference.

After receiving her Master’s degree from Bard College and performing/teaching  in Hawaii, Schutz returned to Stony Brook to pursue her DMA and
she took the program by storm.

“Rarely have we seen a singer who has had the talent and skill to so persuasively perform music spanning from the early Baroque period to the present,” said Goldstein. “Her versatility is remarkable. Rachel is also a natural actor, ranging widely from furious to copy to love-struck, as the role requires.”

Schutz, began singing at the age of three and performed in her first professional touring opera at 12. She has performed throughout the United States, Europe and Asia and won previous awards including third prize in the

this past May, the Sorel Fellowship Award (Songfest) and the Lillian Caroff Meyer Award (Sante Fe Opera). She was a New York district winner and regional finalist at the Met Opera National Council Auditions.

Equally at home in the opera house as on the concert stage, Schutz’s recent roles include Johanna in “Sweeney Todd” and Diana in “Siren Song” (Hawaii Opera Theatre); Thérèse in “Les Mamelles de Tirésias” and Jessie in “Mahagonny Songspiel” (Opera Parallèle); and Susanna in “Le Nozze di Figaro” (Stockton Opera). She has also performed with The Hawaii Symphony Orchestra, the Boston Pops as well as at Zankell Hall at Carnegie Hall, Tanglewood Music Center and Tongji University in Shanghai.

Schutz will perform a recital tour in Thailand in September (Bangkok, Chiang Mai and Phuket), followed by a performance of Ligeti’s “Mysteries of the Macabre” with the Stony Brook Symphony Orchestra in October. She will be doing Philip Glass’s opera “Les Enfants Terrible” with Opera Parallele in San Francisco in May 2017.

To hear two performances by Rachel Schutz, please go to:

“Heart, We Will Forget Him” (Copland)