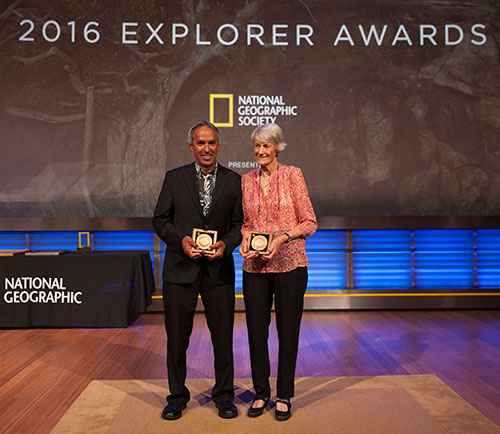 STONY BROOK, NY–July 12, 2016–Stony Brook University’s Meave Leakey has received the 2016  Hubbard Medal, National Geographic’s oldest and most prestigious honor, presented for lifetime achievements in areas of scientific research, exploration, and conservation. Leakey, a world renowned paleoanthropologist, professor of Anthropology and Director of Field Research at Turkana Basin Institute, was recognized for redefining understanding of humankind’s early ancestors as well as the roots of bipedalism.

Our honorees are true leaders in research, conservation, and exploration,” said Gary E. Knell, president and chief executive officer of the National Geographic Society. “They are amazing individuals who have surprised us, inspired us and given us hope. We salute their efforts, and we are privileged to share their stories and experiences with our global audiences.”

Dr. Leakey is a National Geographic explorer-in-residence, a research affiliate at the National Museums of Kenya, and co-director of the Koobi Fora Research Project (KFRP). Over five decades, she has helped uncover much of the evidence of human evolution. Assuming leadership of the KFRP project in 1989, Dr. Leakey and her team have made groundbreaking discoveries including 1994’s Australopithecus anamensis, a new species and the oldest known hominin to date; and Kenyanthropus platyops, a new hominin genus and species announced in 2001.

Dr. Leakey is one of fewer than 100 honorees who have been presented with the Hubbard Medal, and the fourth Leakey to be recognized. Her mother-and father-in-law, Louis and Mary Leakey won the award in 1962 and husband Richard Leakey was the recipient of the Medal in 1994.

In addition this year, Nainoa Thompson, President of the Polynesian Voyaging Society, was also a Hubbard Medal recipient.