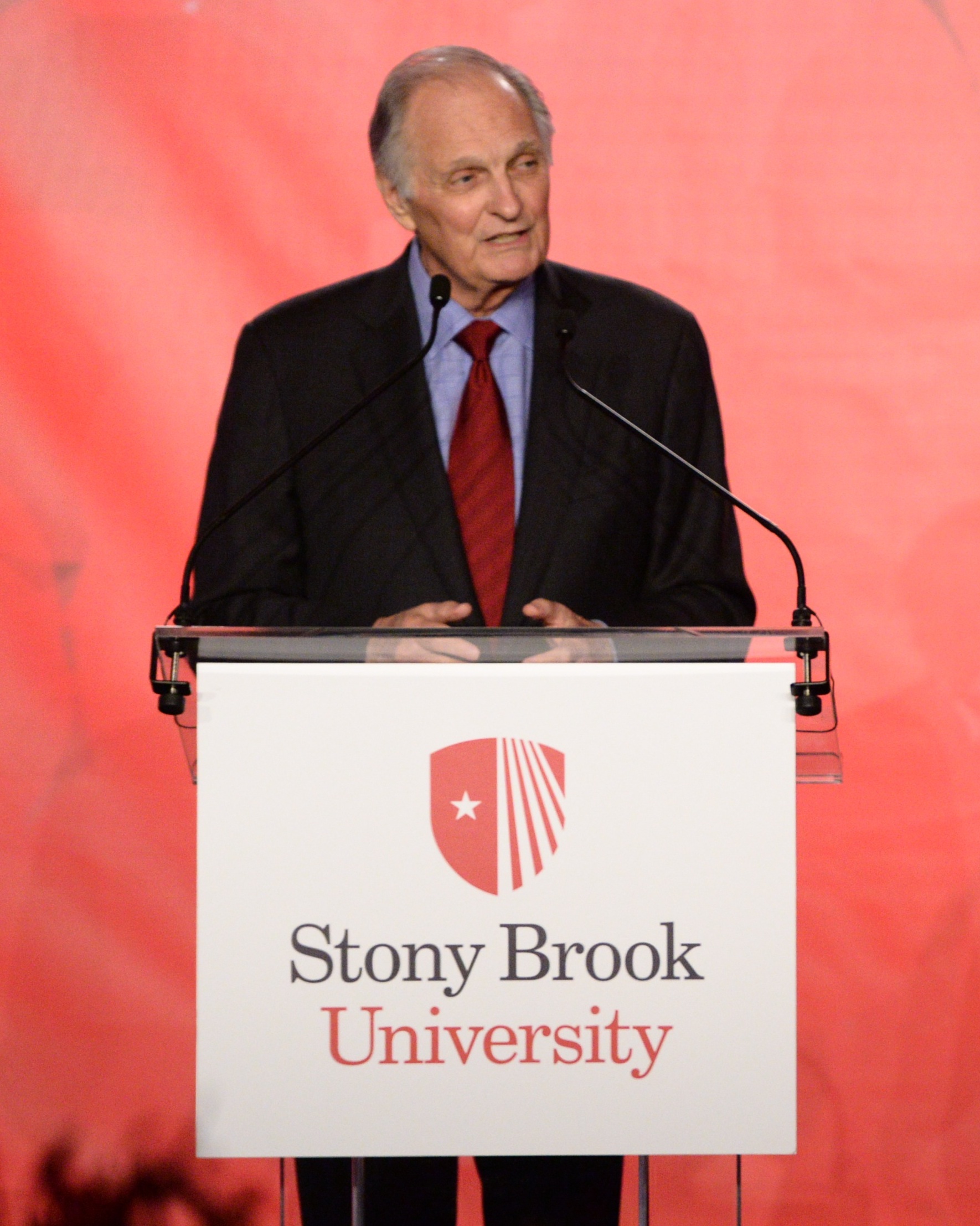 Physicist from Michigan and Psychologist from Arizona win top honors


STONY BROOK, NY, June 6, 2016 – If a tree fell in the woods and no one was around, would it make a sound? From vibrations in speakers to light reflections and pixels in a camera, those were just some of the examples used to tackle the question “What is Sound?” in the Alan Alda Center for Communicating Science’s  5th annual The Flame Challenge.  This year’s question was posed to scientists by 11-year olds from around the world.

Alan Alda announced the winners of Stony Brook University’s Flame Challenge contest today at the World Science Festival in New York City.  The winners, Bruce Goldstein of Arizona and Nick Weckesser of Michigan, each received a $1,000 prize, as well as congratulations from Alda and hundreds of children at the “What Is Sound?” event today at the World Science Festival in Manhattan.  The Flame Challenge asked scientists to answer the question “what is sound?” in a way that would interest and enlighten 11-year-olds.  More than 26,000 schoolchildren judged the entries, including children in Australia, Canada, China, England, Germany, India, Ireland, Netherlands, New Zealand, Pakistan, Sultanate of Oman, Thailand, United Arab Emirates, Italy, as well as in the United States.

Nick Weckesser, a physicist from Michigan who enticed kids with his descriptions of air wiggles, was the winner in the video category (winning video).  Nick has an MS in physics from Eastern Michigan University and has been teaching college physics and explaining complex science in a clear and vivid way to the public on his YouTube channel: The Science Asylum. “It’s important for scientists to be challenged as a part of the scientific process” Nick explains. “The Flame Challenge carries that philosophy into science education. Whether they’re competing or just watching, it helps scientists improve their educational ability by reminding them they weren’t always adults…If that science is also communicated in an entertaining way, it has the power to inspire children and adults alike to pay attention to the world around them and maybe even pursue science as a career.  As a society, we need effective scientific communication as we face future challenges.” His advice to scientists out there: “the best way to teach kids is to find your inner child.”

Dr. Bruce Goldstein, the winner in the written category, painted a picture of sound by describing vibrations on a drum (link – scroll down).  Bruce is a distinguished teacher and Associate Professor Emeritus of Psychology at the University of Pittsburgh and Adjunct Professor of Psychology at the University of Arizona. He believes the Flame Challenge is important because, “science is a mystery to many people, so it is important to be able to communicate it in a way that they will find accessible, and in a way that enables them to appreciate the important role that science plays in their lives…I hope the Flame Challenge helps students experience the excitement of science and see the beauty of science.”  As a college professor his biggest challenge in entering the contest was not just describing sound in and accurate and exciting way, but, “writing in a way that would be interesting to 11 year-olds, while not talking down to them.”

The winning entries, as well as other finalists, can be seen at the Flame Challenge website, www.flamechallenge.org.  The annual contest is run by Stony Brook University’s Alan Alda Center for Communicating Science, named for Alda, an acclaimed actor, writer and science advocate who is also a visiting professor at Stony Brook.

“The 26 thousand kids who had fun learning the physics of sound gave a special gift to the hundreds of scientists who entered the Flame Challenge: a chance to learn and relearn the importance of relating to your audience. The scientists and the students both had a chance to come away knowing more than they did before. I congratulate them and I thank them all,” explains Alda.

The Flame Challenge, now in its fifth year, aims to encourage scientists to explain complex material in ways non-scientists can understand. The first year’s question, “What is a flame?” was one that Alan Alda   had asked when he was 11. The contest is sponsored by the American Chemical Society and the American Association for the Advancement of Science (AAAS).

“The Flame Challenge is a remarkable competition that we proudly support,” says Donna J. Nelson, president of the American Chemical Society. “It takes the scientists and the young students, who ask the questions and judge the entries, on a joint journey of discovery. For the scientists, it’s about explaining basic scientific principles in simple, yet imaginative ways. For the students, it’s an opportunity to envision science, not as an arbitrary set of facts and figures, but as a vital and visionary universe of the possible that they can explore and expand.”

“Congratulations to the winners of the 2016 Flame Challenge,” said Rush Holt, chief executive officer of the American Association for the Advancement of Science (AAAS) and executive publisher of the Science family of journals. “The genius of the Flame Challenge is to take a deceptively simple and obvious question that is actually rich and layered and can get a child to think more deeply about the world of science. `What is Sound?’ is a thought-provoking subject for scientists and students alike to tackle. To be able to explain the complex nature of sound to children, yet make it fun and accessible to them, is an achievement worth acknowledging. AAAS is proud to be a sponsor of the competition, and to help encourage scientific thought and creativity for all ages.”

To find the Flame Challenge winners, entries hundreds of scientists were first screened for accuracy and then sent out to schools for judging by 11-year-olds. Entries came in from scientists from around the world including Australia, Canada, Costa Rica, Egypt, Finland, Germany, India, Indonesia, Ireland, Japan, New Zealand, Portugal, Romania, South Africa, Spain, Syria, United Kingdom, and the United States.

Alan Alda launched the Flame Challenge in 2012 by asking scientists to explain a flame to an 11-year old in clear and concise terms. Since then, the questions – what is time, what is color, and what is sleep – have been contributed by 11-year-olds.  The sleep question was sent in by many students this year including Keziah Job, an 11-year-old sixth grader from Lynbrook South Middle School in Lynbrook, New York, and Aidan Green, a fifth grader from Maungatapu Primary School in Tauranga, New Zealand. “I like to listen to the sounds around me and wonder how they all sound different?” said Aidan. “What makes them do that?”

“It is exciting, heartwarming and inspiring to see how hundreds of scientist tackled the challenge of explaining science to kids in ways they not only understand, but are also inspired to learn more. The ability to witness the excitement of the kids and how they provided feedback to theses outstanding scientist communicators is one of the most exciting part of my work,” said Laura Lindelfeld, Director of the Alda Center.

About the Flame Challenge


The annual Flame Challenge contest is part of the Alan Alda Center for Communicating Science’s mission of helping scientists communicate more effectively with the public. Located in Stony Brook University’s School of Journalism, the Alda Center gives innovative science communication courses for graduate students in the sciences, and conducts workshops around the country. Alan Alda is a founding member of the Alda Center and a visiting professor in the School of Journalism.


The Flame Challenge’s sponsors are both major nonprofit scientific societies. The American Chemical Society is chartered by the U.S. Congress and is a global leader in providing access to chemistry-related research. ACS encourages each of its 164,000 members to speak simply about their science and its importance to all of our lives. The American Association for the Advancement of Science (AAAS), the world’s largest multidisciplinary scientific society and publisher of the journal Science, was founded in 1848. It includes some 261 affiliated groups, serving a total of 10 million individuals, and its mission is to “advance science and serve society.”


​Part of the State University of New York system, Stony Brook University encompasses 200 buildings on 1,450 acres. Since welcoming its first incoming class in 1957, the University has grown tremendously, now with more than 24,600 students, 2,500 faculty and 20 NCAA Division I athletic programs. Its membership in the prestigious Association of American Universities (AAU) places Stony Brook among the top 62 research institutions in North America. U.S. News & World Report ranks Stony Brook among the top 40 public universities in the nation and Kiplinger named it the 33rd best value in public colleges for in-state students and 26th for out-of-state students. One of four University Center campuses in the SUNY system, Stony Brook University co-manages Brookhaven National Laboratory, putting it in an elite group of universities that run federal research and development laboratories. As the largest single-site employer on Long Island, Stony Brook is a driving force of the regional economy, with an annual economic impact of $4.65 billion, generating nearly 60,000 jobs, and accounting for nearly 4 percent of all economic activity in Nassau and Suffolk counties and roughly 7.5 percent of total jobs in Suffolk County.