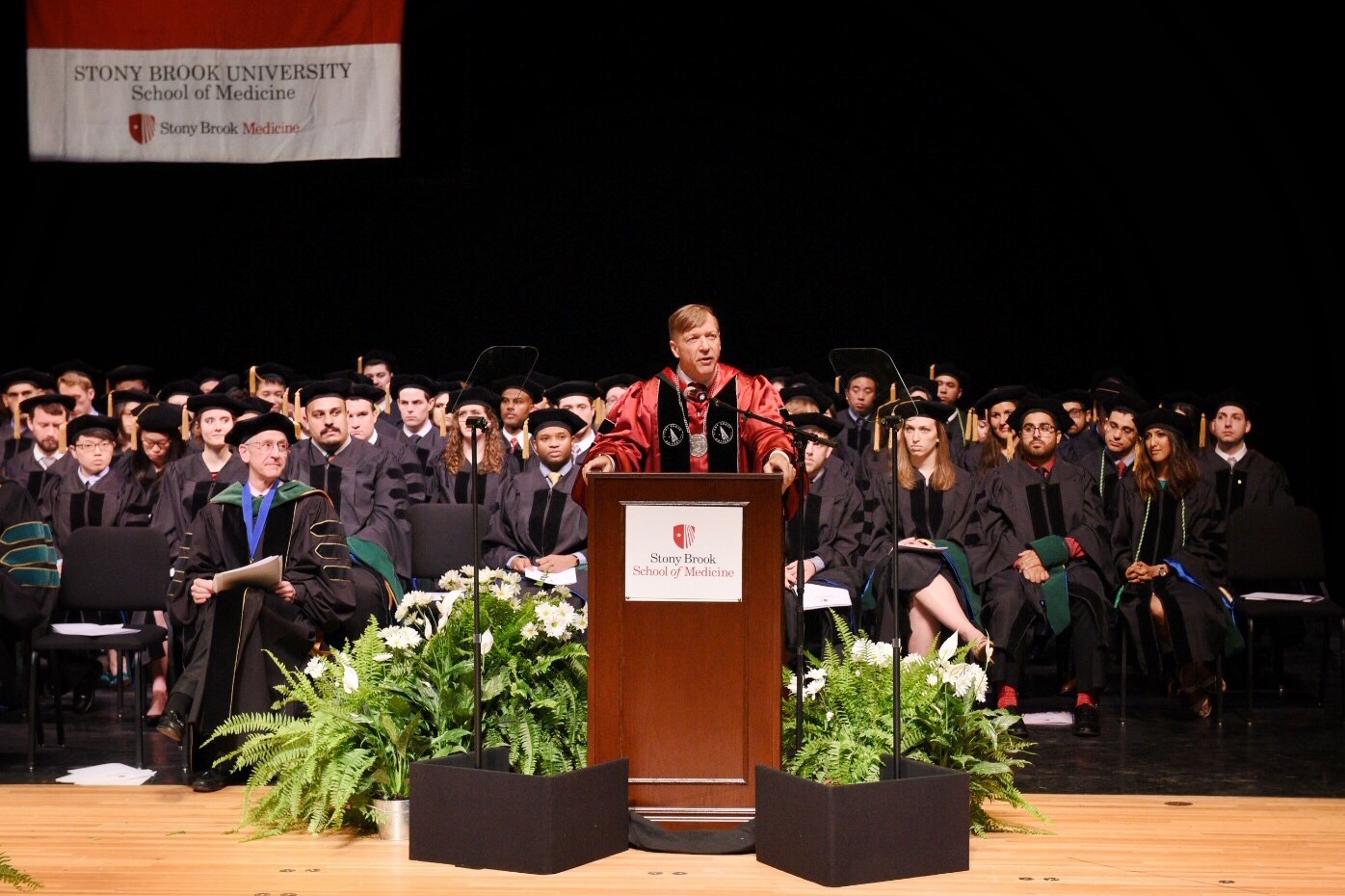 Stony Brook, NY – May 24, 2016 – One hundred and twenty-four Stony Brook University School of Medicine 2016 graduates will soon embark on their journeys as physicians, as the Class received their MD degrees during the School’s 42nd Convocation, presided over by Kenneth Kaushansky, MD, Senior Vice President for Health Sciences and Dean of the School of Medicine. They enter the profession at a time when scientific knowledge is constantly growing, and discoveries of targeted therapies and technologies continue to rapidly advance the field.

During a packed Staller Center Convocation ceremony on May 19, family and friends of the Class of 2016 joined School of Medicine faculty and administrators in congratulating the graduates. Stony Brook University President Samuel L. Stanley Jr., MD, the Convocation Speaker, led the charge by proudly repeating the phrase, “well done,” directly to the graduates at the start of his address.

“The future of medicine has never been brighter, and I believe we are at the dawn of a true revolution in medicine, where the power of genetics, proteomics, sophisticated imaging and big data will allow us to change our approach to health,” said Dr. Stanley.

“Medicine is constantly evolving, and you must be ready to accept change and be a life-long learner. You will have a chance to be at the vanguard of this movement. It will be an incredibly exciting paradigm-shifting voyage,” emphasized Dr. Stanley.  “But whatever you do, I think your education at Stony Brook School of Medicine has prepared you for leadership and will give you the ability both to embrace positive change and to create it for our society.”

The Class of 2016, a diverse group of physicians, begin their residencies in early July, collectively entering 22 medical specialties. Approximately one-third of the Class will enter primary care specialties, which include Pediatrics, Internal Medicine and Family Medicine. The graduates will continue their training in leading medical institutions in 19 different states including Harvard, Yale-New Haven Hospital, Duke University Medical Center, Columbia, Cornell, Mount Sinai and the University of California while a record 21 graduates will stay at Stony Brook Medicine to launch their medical careers. One of those graduates is Marshall Leonard, who delivered a rousing, closing student address. He will begin his residency in Emergency Medicine in July.

“I am so happy to be staying at Stony Brook, and eager to learn a lot more from my mentors in Emergency Medicine in the coming years,” said Dr. Leonard. The Georgia native is also relieved and excited to be staying on Long Island, as he and his wife live in Wading River and are raising three young daughters.

Dr. Kaushansky commended the Class for their academic success and their many contributions to clinical care at Stony Brook, on Long Island and globally. He cited that a record 29 graduates took part in global medical outreach programs during their medical school tenure, providing care to those in need in a total of 16 different countries.

“As physicians you will make life-altering decisions, and your calling can be summed up in two words, ‘awesome responsibility,’” said Dean Kaushansky. “There have been spectacular successes in medicine, and I have no doubt there will continue to be more successes in our field that transform health in our country and around the world.”