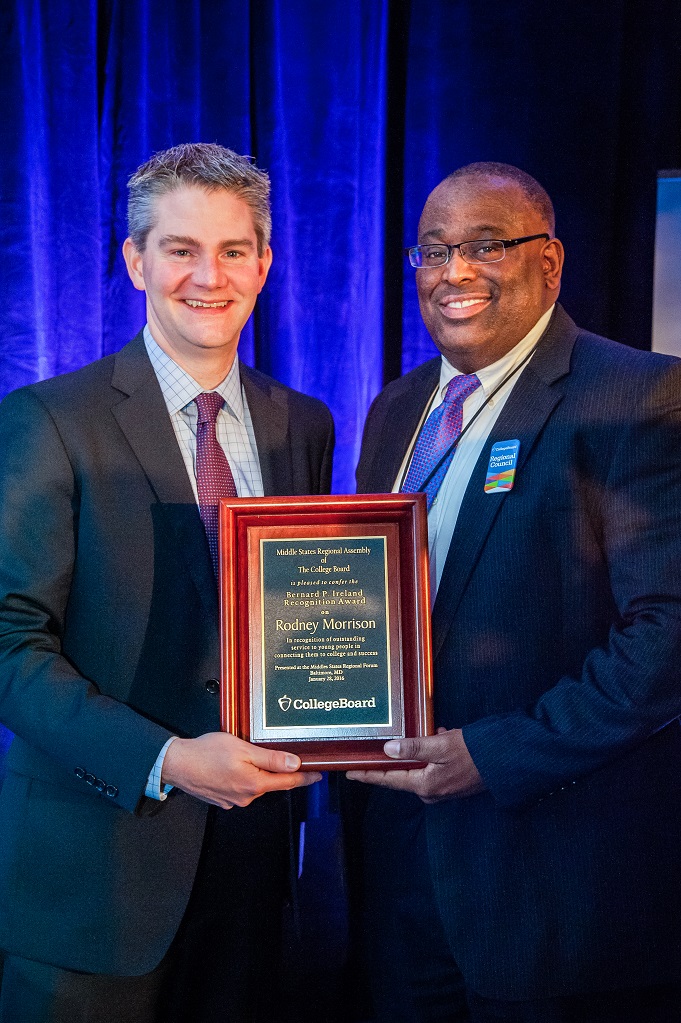 The award recognizes an individual with a commitment to improving humanity through education, by demonstrating a record of service to young people in the easing of the transition from high school to college, and distinguishing themselves as a change agent in their constituency. This award decision was made by the Nominating Committee of the Middle States Regional Council.

“Congratulations to Rodney Morrison for this well-deserved honor and recognition,” said Stony Brook University President Samuel L. Stanley Jr., MD. “It is a testament to his outstanding work, which has helped the University achieve new milestones such as exceeding enrollment goals and raising 4-year graduation rates. His dedication and commitment to current and prospective students is quite profound.”

“As Provost, it has been my pleasure to work alongside Rodney Morrison in planning and executing the University’s enrollment management initiatives,” said Dennis N. Assanis, Provost and Senior Vice President for Academic Affairs. “Rodney is well-deserving of this recognition for his work in ensuring that our student body continues to be highly-qualified and diverse, and in supporting Stony Brook University’s many student success initiatives.”


Colleagues said:
Rodney is one of the enrollment professionals that truly puts long term student success as a priority. He cares about outcomes and not just initial short term enrollment decisions, and is a strong advocate for providing students with the supports they need to be successful in higher education. As students look back at their college years, they remember Rodney as a person who had a strong impact on them getting into, staying, and graduating from college.


The professionals Rodney has worked with said

: They admire the impressive array of institutions he has served, and the leadership and new ideas he has brought to advance the objectives of each institution. Rodney is always ready to elevate the conversation and address the hard-hitting issues with professionalism and warmth.

About the College Board

The College Board is a mission-driven not-for-profit organization that connects students to college success and opportunity. Founded in 1900, the College Board was created to expand access to higher education. Today, the membership association is made up of over 6,000 of the world’s leading educational institutions and is dedicated to promoting excellence and equity in education. Each year, the College Board helps more than seven million students prepare for a successful transition to college through programs and services in college readiness and college success — including the SAT® and the Advanced Placement Program®. The organization also serves the education community through research and advocacy on behalf of students, educators, and schools. For further information, visit
www.collegeboard.org
.