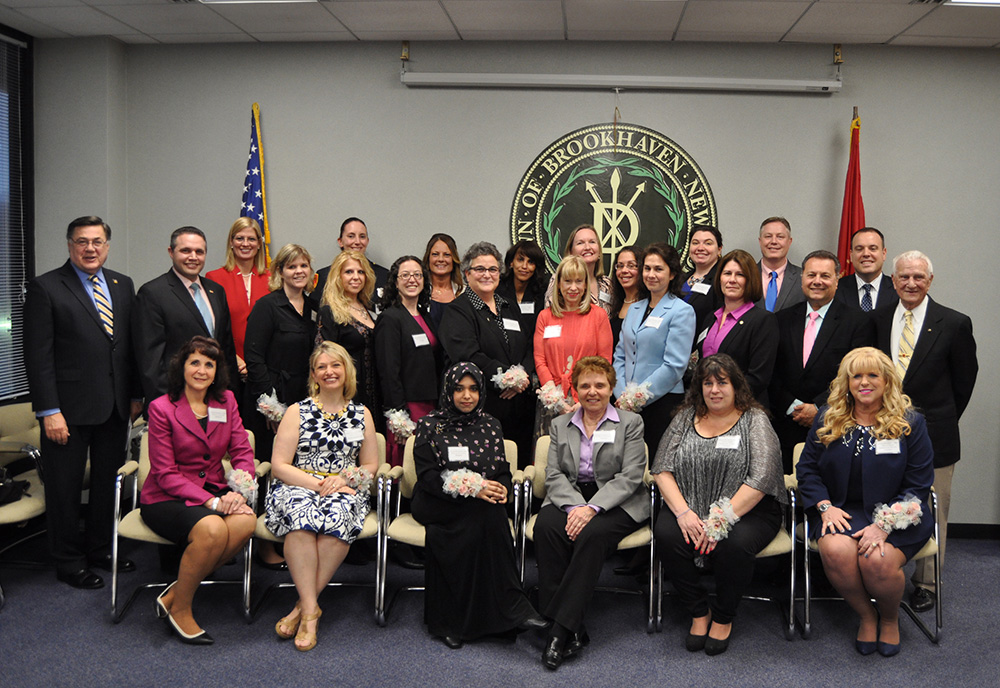 Stony Brook, N.Y., April 5, 2016 – Two Stony Brook University professionals received the highest honor by the Town of Brookhaven Office of Women’s Services during its 30th Annual Women’s Recognition Night. Marie A. Badalamente, PhD, a Professor in the School of Medicine’s Department of Orthopaedics, and Cathrine Duffy, MA, Associate Director of Student Support, were among those women recognized for their excellence and leadership in their professions.

Each year in celebration of National Women’s History Month, the town honors the accomplishments of outstanding women who have made significant contributions to the quality of life in Brookhaven based on a variety of endeavors ranging in a variety of fields, such as education, medicine, law, performing arts, government and community service.

This year, Dr. Badalamente was selected as the winner in the Science category. Dr. Badalamente and colleagues in her department discovered a new treatment for Dupuytren’s Contracture, a crippling hand condition that affects millions worldwide. The discovery led to the first non-surgical FDA-approved treatment of the condition. She and colleagues have taught other professionals worldwide how to administer the treatment. Their discovery of this injection treatment, which is based on breaking up excess collagen, also led to the creation of the Dupuytren’s Institute at Stony Brook.

Dr. Badalamente ‘s research with collagenase is also leading to a new treatment for frozen shoulder and a way to effectively diminish cellulite.

Duffy was chosen as the winner for the Education Administration category. She provides support and outreach to students, as well as administrative and programming support through the Office of the Dean of Students. She is also Staff Liaison to Stony Brook’s Elect Her: Campus Women Win program and works to collaborate with faculty and staff on women’s leadership development on campus, including the American Association of University Women (AAUW) that encourages women to run for elected office.

Duffy has been instrumental in bringing AAUW’s Start Smart Salary Negotiation workshops to campus. These workshops teach negotiation skills to women students entering the workforce in an effort to narrow the gender wage gap.

Nominations for the awards are considered by members of Brookhaven’s Women’s Advisory Board and selected based on resumes and letters of recommendation by peers.