Matches Made: From Stony Brook to Harvard to UCLA and More 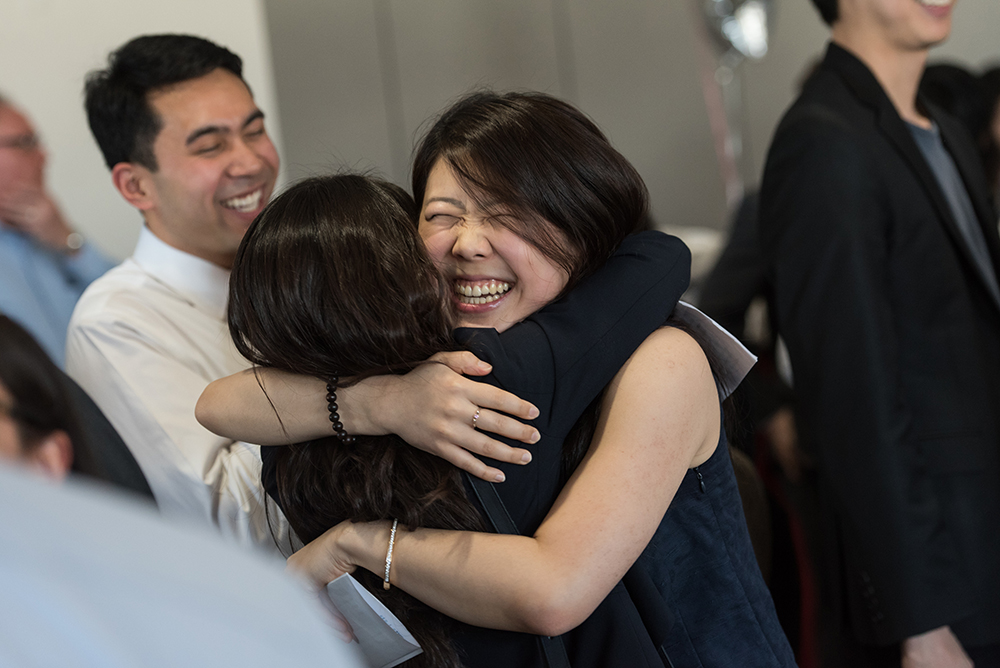 Matches Made: From Stony Brook to Harvard to UCLA and More

Stony Brook, NY – March 25, 2016 – Excitement and jubilance dominated the scene as 119 fourth-year Stony Brook University School of Medicine students learned where they will begin their residency training this July. The rite of passage, known as Match Day, is an annual event at Stony Brook and other leading medical schools nationwide. This year on March 18 many Stony Brook students matched to top training programs at institutions such as Harvard, Brown, Cornell, Columbia, Johns Hopkins and UCLA. An unusually high number of students also matched to Stony Brook Medicine (21).

The Class of 2016, a diverse group collectively entering 22 medical specialties, will practice in New York, 18 other states and Washington, DC. A slight majority of the Class– 51 percent – will practice in New York State. Approximately one-third of the Class will enter primary care specialties, which include Pediatrics, Internal Medicine and Family Medicine. For the first time, Emergency Medicine ranked as the leading specialty (22), followed by Internal Medicine (21) and Pediatrics (10).

“Match Day seems to get better each year, and the overall Match for the Class of 2016 is a testament to the students’ talents and hard work, and the School of Medicine’s commitment to cutting-edge medical education and clinical and research training,” said Kenneth Kaushansky, MD, MACP, Senior Vice President of the Health Sciences and Dean of the School of Medicine. “All of this has culminated into successful matches to highly competitive residency programs all over New York State and nationwide.”

“We had a remarkable number of students who matched to specialties at Stony Brook Medicine, and this indicates how much they value our education and training system,” said Latha Chandran, MD, MPH, Vice Dean for Undergraduate Medical Education at Stony Brook University School of Medicine. “These students will continue to excel at Stony Brook but now as physicians, and they will help to further broaden our clinical offerings to the community.”

The students’ personal journeys at Stony Brook University and into the field of medicine varied considerably, and in nearly all cases their residency match met their expectations.

Michael Coulter, a Southern California native and former star Stony Brook University quarterback and team captain of the 2011 championship Seawolves team, will be headed  back home to California to a U.S. Navy assignment. He matched to a Head and Neck Surgery program at the U.S. Naval Medical Center in San Diego. His fiancé and fellow classmate, Elizabeth Young, matched to the University of California, San Diego Medical Center in Obstetrics-Gynecology.

Fabio Lima, an immigrant from Portugal who grew up on Long Island, has been educated at Stony Brook University for the past 10 years. He received his undergraduate degree and MPH at Stony Brook and soon will earn his MD degree. He and his girlfriend, Lily Wang, successfully matched as a couple. They both will be practicing at Rhode Island Hospital/Brown University, he as a resident in Internal Medicine, and she as a resident in General Surgery.

Celine Pascheles, born in Switzerland and raised in New Jersey, has dreamed of becoming a physician since she was six years old. The dream is close to reality now, as she matched to Beth Israel Deaconess Medical Center in Emergency Medicine. Celine is a former NCAA Division 1 Women’s Tennis competitor who also competed at the U.S. Open as a Mixed Doubles Qualifier. She said that the adrenaline she used on the courts will now be better used to care for patients in the hospital Emergency Department.

Administered by the Association of American Medical Colleges (AAMC), Match Day reveals the placement of some 25,000 medical students nationwide to residency assignments. Match Day results indicate trends in medicine and illustrate the need for growing numbers of physicians and certain specialists.