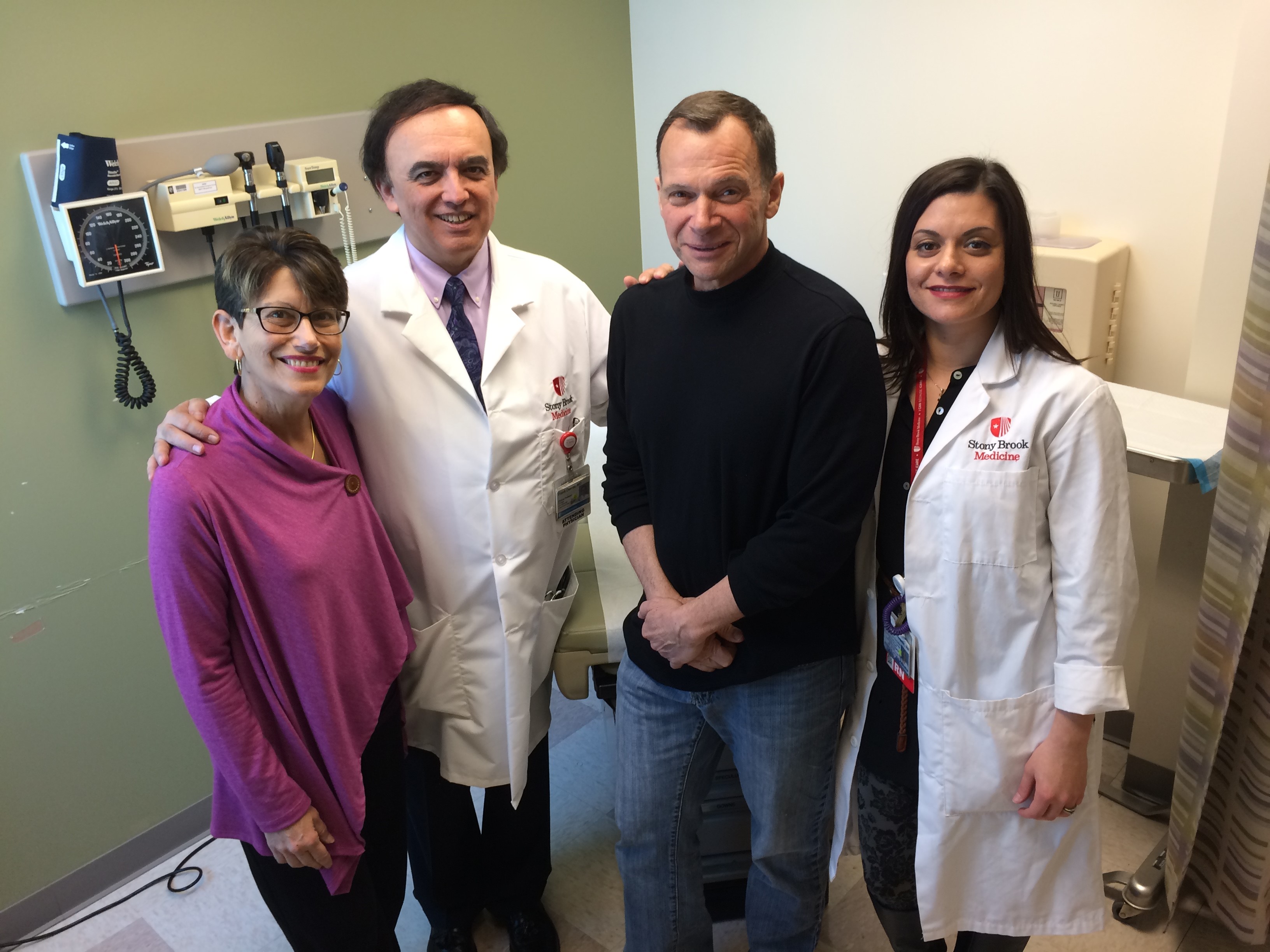 STONY BROOK, NY, MARCH 23, 2016 – Nearly 123,000 Americans are on the national waiting list for organ donation and of that over 101,000 are in need of a kidney donation. While waiting on a list could take years, patient struggle through multiple trips a week to a dialysis center.

57-year-old Angela Danz of East Islip battled kidney cancer back in 2013 and led to the removal of both of her kidneys. Now two years cancer-free, Angela thought she had the answer that would get her off that waiting list— her husband, Tom, of 36 years would donate his kidney and all would be fine. But when the medical workup came back, it found that Angela had antibodies that would reject her husband Tom’s kidney.

“We were hit with some devastating news that we weren’t a match, which was devastating for both of us,” Tom Danz told CBS New York.

The couple’s four children all stepped forward, along with family and friends, but no one was a match.

“Even though we got a denial of results, there was always hope that someone else was in the system,” their daughter, Alex Danz, told CBS New York.

So the waiting would continue for Angela, or so they thought.

On Tuesday, March 15, Angela and Tom took part in the first kidney paired donation exchange on Long Island at Stony Brook University Hospital. This is also the first exchange for the Transplant Department at Stony Brook.

Paired kidney exchanges typically involve a donor who wants to offer an organ to a specific recipient, usually a friend or loved one, but is incompatible because of a mismatch in age, size, blood type or antigen sensitivity. Instead of giving to the original patient, the person donates to another patient who also has a mismatched donor.

Angela received a kidney from a donor in Minneapolis. That donor had planned to donate to his family-member, but for similar reasons, the match was unsuccessful. Tom’s kidney was not a match for the family in Minneapolis, but it was a match to a man in Missouri. A couple at Barnes-Jewish Hospital in St. Louis, Missouri was hoping to be a match, but no success. The kidney in Missouri happens to match perfectly for the family-member in Minnesota. So in the end, there are 3 live donors giving to 3 recipients in 3 different States—saving lives and opening up spots on the donor waiting lists for others.

“We coordinated all of these surgeries at the same time,” Frank Darras, MD, Clinical Professor, Department of Urology, and Medical Director, Transplantation Services told Newsday of the three-state ordeal, which involved timing kidney removals, jet flights and transplants.

Darras told Newsday that he sees multi-state exchanges as adding a new dimension for kidney failure patients on Long Island.

He performed the operations on both Danzes in a round-the-clock surgical marathon that began before 8 a.m. Tuesday with the removal of Tom Danz’s kidney and ended at 11 p.m. that day with the completion of the transplant. He said he saw the kidney already producing urine as he finished suturing it in place.

“We are thrilled that we were able to do this,” Darras said during an interview with Newsday, “because it allows us to offer our patients every possible option.”

“Not only Angela got this whole new lease on life, but there are two other patients who did as well,” Stony Brook University Hospital Transplant Senior Specialist, Dawn Francisquini told CBS New York.

Tom and Angela are feeling great and recovering from their surgeries.

“I’ve been truly blessed,” Angela said. “If it wasn’t for donors, my husband included, I wouldn’t be here feeling life like I’ve been reborn,” Angela told Fox 5 in New York.