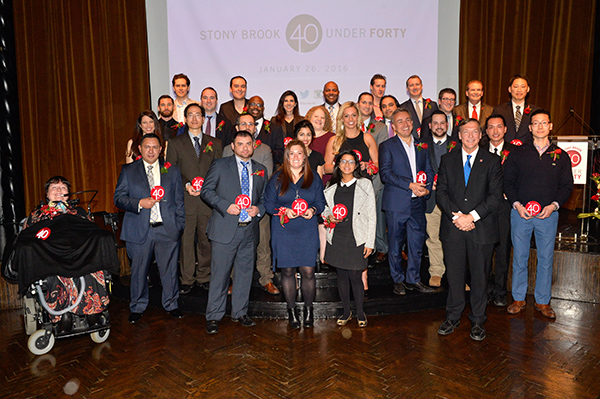 This year’s honorees were recognized for their achievements in medicine, the arts, public service, business, and academia, among other fields.

Addressing the audience, President Stanley reminded the honorees and alumni in attendance that they are vitally important to the University’s mission and he urged them to become even more involved in their alma mater.

“My vision of a great university includes an alumni network so strong that students want to come to Stony Brook because they know their alumni organization will be standing by to support them and their university,” he said.

Also participating in the event were Stony Brook Alumni Association President Robert Stafford ‘72, ’82 and student Danielle Meyers ’16 who opened the awards program with the story of her journey from the housing projects of Harlem to Foster Care Youth Ambassador to  Stony Brook University EOP student, poised to become the first college graduate in her family.

“Being at Stony Brook has allowed me to break barriers that I never knew I could overcome,” she said to the audience. “I’m proud and inspired that I will be able to call you my fellow alumni in a few short months.”

Each year the University solicits nominations of alumni age 40 and under who are making exceptional contributions in their respective professions or in their communities and who reflect the impact of a Stony Brook degree.  For more information on the Stony Brook University “40 Under Forty,” visit www.stonybrook.edu/40underforty.

Part of the State University of New York system, Stony Brook University encompasses 200 buildings on 1,450 acres. Since welcoming its first incoming class in 1957, the University has grown tremendously, now with more than 25,000 students and 2,500 faculty. Its membership in the prestigious Association of American Universities (AAU) places Stony Brook among the top 62 research institutions in North America. U.S. News & World Report ranks Stony Brook among the top 100 universities in the nation and top 40 public universities, and Kiplinger names it one of the 35 best values in public colleges. One of four University Center campuses in the SUNY system, Stony Brook co-manages Brookhaven National Laboratory, putting it in an elite group of universities that run federal research and development laboratories. A global ranking by U.S. News & World Report places Stony Brook in the top 1 percent of institutions worldwide. It is one of only 10 universities nationwide recognized by the National Science Foundation for combining research with undergraduate education. As the largest single-site employer on Long Island, Stony Brook is a driving force of the regional economy, with an annual economic impact of $4.65 billion, generating nearly 60,000 jobs, and accounts for nearly 4 percent of all economic activity in Nassau and Suffolk counties, and roughly 7.5 percent of total jobs in Suffolk County