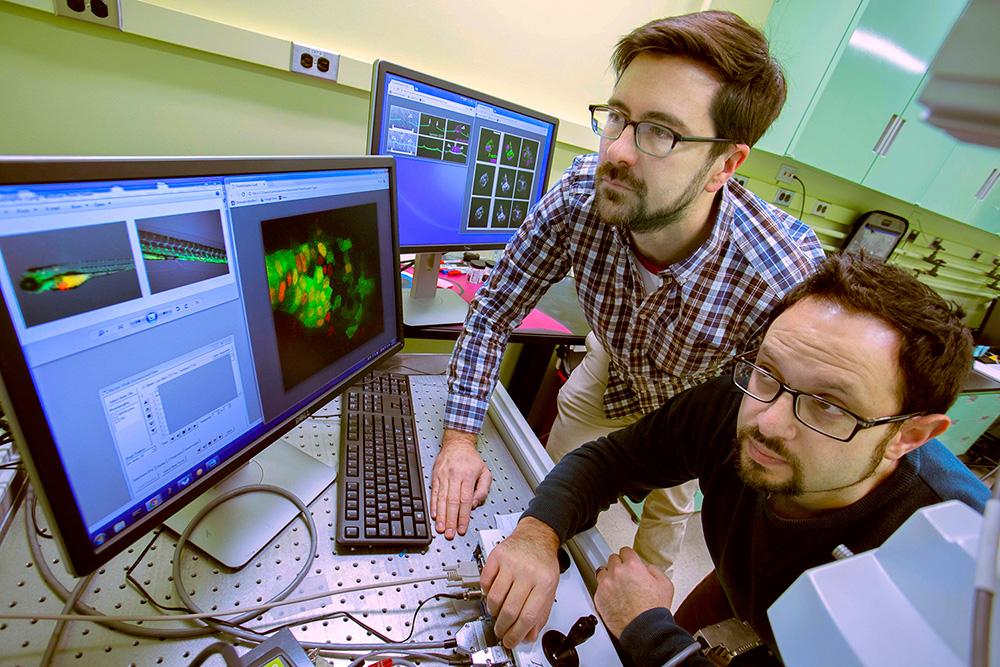 Stony Brook, NY, January 13, 2017 – Hallmarks of cancer progression are uncontrolled proliferation (division) of cancer cells and invasive behavior, leading to the spread of tumor cells throughout the body. Now two Stony Brook University cell biologists, David Matus, PhD, and Benjamin Martin, PhD, have discovered that cell division and invasion are mutually exclusive behaviors. For this novel finding, the Damon Runyon Cancer Research Foundation has awarded the researchers with the 2017 Damon Runyon-Rachleff Innovation Award and a two-year grant of $300,000, followed by another renewable grant of $300,000 for an additional two years to further advance their work.

“Cells can’t divide and invade at the same time, and most cancer drugs attack tumor overproliferation,” said Dr. Matus, an Assistant Professor in the Department of Biochemistry and Cell Biology. “Therefore, we hope our laboratory findings become a key foundation to better understanding the metastatic process in order to design new drugs that attack cancer cells by their mutually exclusive behaviors.”

Drs. Matus and Martin, also an Assistant Professor in the Department of Biochemistry and Cell Biology, developed a joint project where they found in the model roundworm, C. elegans, that cell invasion and cell division are mutually exclusive behaviors. This functional link between cell cycle arrest and invasive behavior has not been directly made before, although in a variety of cancers there exists correlative data suggesting that tumor cells become less proliferative during invasion.

In recognizing the potential of Drs. Matus and Martin’s work, the Damon Runyon Cancer Research Foundation stated that “insights from their work will have profound implications in future design of therapeutics to eradicate invasive cells that may escape traditional chemotherapeutic agents that only target actively dividing cells.”

About the Damon Runyon-Rachleff Innovation Award

The award is given each year to provide support for the next generation of exceptionally creative thinkers with “high-risk/high-reward” ideas that have the potential to significantly impact the understanding of and/or approaches to the prevention, diagnosis or treatment of cancer.

The awardees are all early career scientists and selected through a highly competitive and rigorous process by a scientific committee comprised of leading cancer researchers who are innovators themselves. According to the Foundation, only those scientists with a clear vision and passion for curing cancer are selected to receive the prestigious award. In 2017, four innovative scientists nationally received the award. For more on this year’s winners see this news from Damon Runyon.