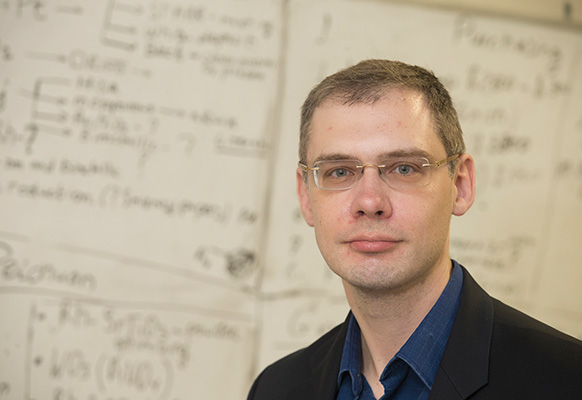 STONY BROOK, N.Y., January 12, 2016 –
Alexander Orlov, PhD, Associate Professor in the Department of Materials Science and Engineering at Stony Brook University, has been named a 2016-17 Distinguished Lecturer by Sigma Xi, an international honor society for scientists and engineers. In this capacity, Dr. Orlov will lecture about scientific advances in nanotechnology in the context of energy generation and clean energy to thousands of scientists at Sigma Xi chapter events worldwide at universities, government laboratories, and industry research centers.

For 78 consecutive years, Sigma Xi selected its panel of Distinguished Lecturers as an opportunity for chapters to hosts visits from outstanding individuals who are at the leading edge of science in a variety of fields. Dr. Orlov is recognized worldwide for his expertise in the development of novel materials for energy generation, structural application and environmental protection. The Distinguished Lecturers are available to chapters from July 1, 2016 to June 30, 2017.

Some of Dr. Orlov’s lecture titles include: How nanotechnology can save us and the environment: Making it happen in a safe way; Exploiting unhappy nanoparticles to produce energy and clean up the environment; and How nanoparticles are used in consumer products: Should we be concerned?

At Stony Brook, Dr. Orlov is also a faculty member of the Consortium for Interdisciplinary Environmental Research, the Institute for Advanced Computational Science, the Advanced Energy Center, and the Department of Chemistry. He is also a Visiting Professor at Cambridge University in the United Kingdom.