From Students to Alumni: Nearly 1,500 Degrees Conferred at 2015 Winter Commencement 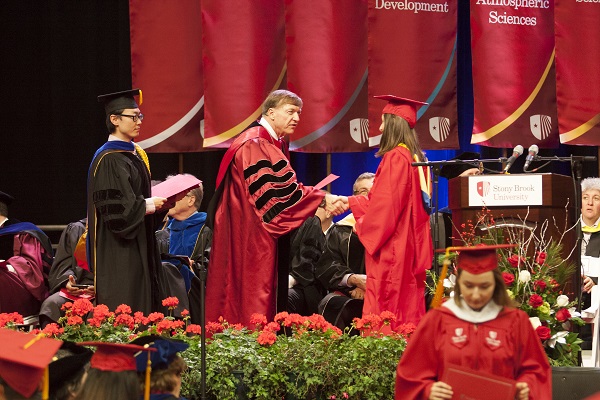 From Students to Alumni: Nearly 1,500 Degrees Conferred at 2015 Winter Commencement

STONY BROOK, N.Y., December 18, 2015 – Stony Brook University held its 18th annual December commencement ceremony in the Island Federal Credit Union Arena, where 1,495 students* had their degrees conferred. Stony Brook’s newest undergraduate, graduate and doctoral alumni range in age from 19 to 73, join more than 150,000 fellow Seawolves who are living and working around the globe.

Student Voice
Women and Gender Studies major, Tayisha Saint Vil, selected to address the new graduates by a committee of staff and faculty from a pool of submitted speeches, shared her thoughts about her years as a Seawolf and offered advice to her fellow graduates:

“I encourage you all to defy the laws of nature, to question everything, in moments of adversity explore all of your options, think outside of the box, apply for that position and when people say you can’t, say you will. “

Next month Saint Vil will begin classes toward the pursuit of a Master in Public Health at Stony Brook University’s School of Medicine.

A total of 1,495 degrees conferred as follows: