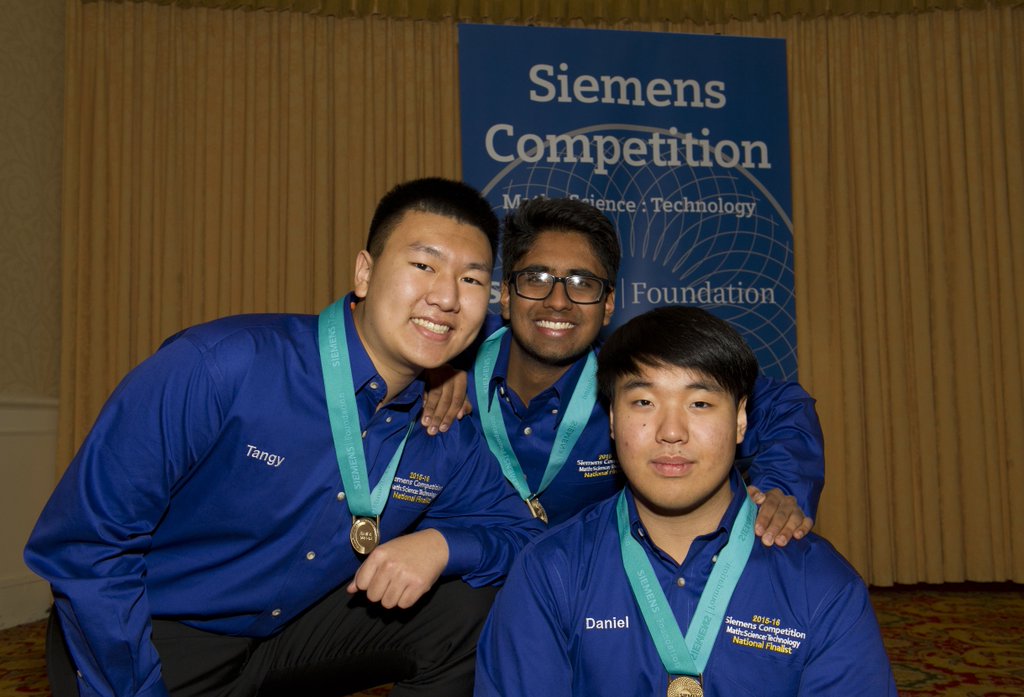 Stony Brook, NY, December 9, 2015 – Three high school students mentored at Stony Brook University were awarded a $30,000 scholarship for their research presented at the Siemens Competition in Math, Science & Technology, one of the nation’s premier research competitions for high school students. All three students participated in Stony Brook’s Garcia Research Scholar Program for High School Students during the summer of 2015.

Daniel Chae of Oakton, Va.; Alan Tan of Fremont, Calif.; and Sidharth Bommakanti’s, of Pleasanton, Calif., research on 3-D tissue printing earned them the title of winning team for region six, and a $30,000 shared scholarship. The team was mentored by Adrianna Pinkas-Sarafova, Adjunct Assistant Professor Department of Material Sciences & Engineering in the School of Engineering and Applied Sciences.

The results of their project, titled “A Novel Study on the Effect of Surface Topography of 3-D Printed PLA Scaffolds on Dental Pulp Stem Cell Proliferation and Differentiation in vitro”, showed promise in combining the fields of stem cell research and material science to improve human health. The team examined 3-D printed structures as a novel substrate for dental pulp stem cells for use in implants. Using 3-D printed scaffolds to create dental implants, they laid the groundwork for engineering tissues for the future. The rising interest in 3-D printing applications and the potential for stem cells to advance the repair of hard and soft tissues inspired the team to pursue the research.

Since 2005, Stony Brook University has mentored more than 400 students who have been Siemens Competition semifinalists and/or regional finalists.

About the Garcia Program
The Research Scholar Program offers the opportunity for high school teachers and students to perform research on the forefronts of polymer science and technology together with GARCIA faculty and staff. Students work as part of focused research teams and are taught to make original contributions of interest to the scientific community. In addition to entering national competitions, the students are encouraged to publish in refereed scientific journals and to present their results at national conferences. Directed by Professor Miriam Rafailovich, SUNY Distinguished Professor in the Department of Materials Science and co-Director Program in Chemical and Molecular Engineering, The Garcia Program is supported by the National Science Foundation and the Morin Trust.