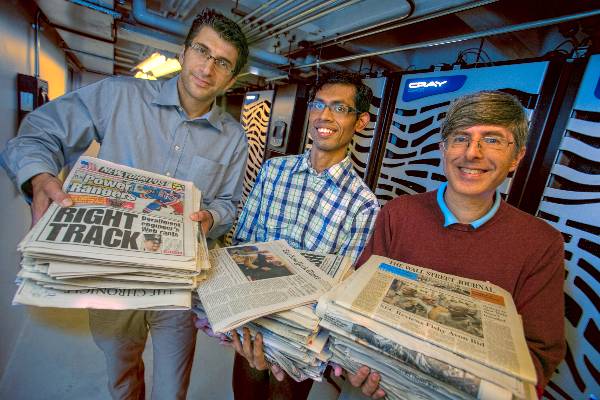 STONY BROOK, NY, October 1, 2015  – Mirroring a major problem in society at large, women are significantly shortchanged when it comes to media coverage, with men being mentioned in the news a whopping five times more than women. This is the major finding of a first-of-its-kind study by Stony Brook University researchers. The paper, titled “A Paper Ceiling: Explaining the Persistent Underrepresentation of Women in Printed News,” is published in the American Sociological Review.

Part of the State University of New York system, Stony Brook University encompasses 200 buildings on 1,450 acres. Since welcoming its first incoming class in 1957, the University has grown tremendously, now with more than 24,600 students and 2,500 faculty. Its membership in the prestigious Association of American Universities (AAU) places Stony Brook among the top 62 research institutions in North America. U.S. News & World Report ranks Stony Brook among the top 40 public universities in the nation and Kiplinger named it one of the 35 best values in public colleges. One of four University Center campuses in the SUNY system, Stony Brook co-manages Brookhaven National Laboratory, putting it in an elite group of universities that run federal research and development laboratories. Stony Brook is ranked in the top 1 percent of the world’s higher education institutions by the  Times Higher Education World University Rankings . It is one of only 10 universities nationwide recognized by the National Science Foundation for combining research with undergraduate education. As the largest single-site employer on Long Island, Stony Brook is a driving force of the regional economy, with an annual economic impact of $4.65 billion, generating nearly 60,000 jobs, and accounts for nearly 4 percent of all economic activity in Nassau and Suffolk counties, and roughly 7.5 percent of total jobs in Suffolk County.