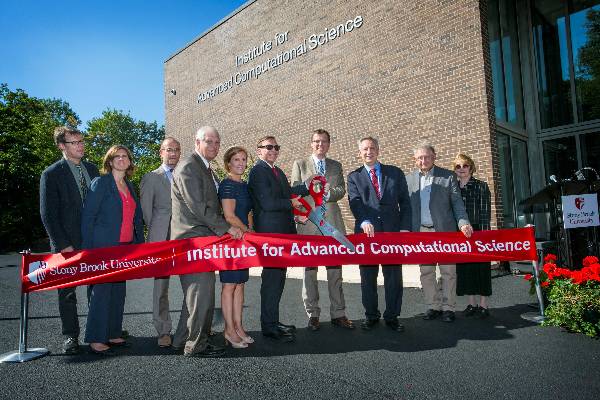 The IACS includes the most powerful computer network ever at Stony Brook to bolster research, industry collaboration and economic development

October 1, 2015 – Stony Brook University held a grand opening for the Institute for Advanced Computational Science (IACS), a $20-million supported 6,000 square-foot facility with the mission to make sustained advances in the science of computation and its applications to complex problems in many fields. The IACS fosters a collaborative environment, with a vision that by 2017 it will be an internationally recognized center with research and education programs and a demonstrated economic benefit to New York State. Stony Brook University leadership, IACS faculty, students and public officials attended the event.

The establishment of the IACS was made possible by a transformational $10 million anonymous donation plus matching funds from the Simons Foundation for a total of $20 million in philanthropic support.

“The creation of the IACS is consistent with Stony Brook’s mission to encourage the untethered pursuit of scientific discovery among our faculty to better understand our world and universe,” said Samuel L. Stanley Jr., MD, Stony Brook University President. “The collaborative academic and industry-related work that will take place at the Institute will push and advance basic science research at Stony Brook and bring forth new ideas and breakthrough discoveries.”

Supercomputers play an ever increasing role in cross-disciplinary research, and the use of high-performance computers is changing the way science gets its answers, industry develops products and society analyzes its needs. The interdisciplinary IACS, working closely with Brookhaven National Laboratory (BNL) and the Computational Science Center, will further cultivate cutting-edge academic and industry collaboration and pool the power of its computer resources together to transform research in many fields of society.

“Stony Brook is already a University that computes with over $40 million worth of federal funding that has computation data as a central element,” said Dennis N. Assanis, Provost and Senior Vice President for Academic Affairs. “The IACS will broaden our use and capabilities of computational data, and it will lead campus-wide initiatives in education and research computing infrastructure.”

Provost Assanis also announced the availability of a new 100-node computer cluster built within the IACS. The cluster, a set of computers connected by a super high-speed network, is a state-of-the-art high-performance system that will have greater speed, memory and computational capacities than any other previously used at the University. The new system will enable faculty, students, and engineers in industry to perform simulations and to analyze data sets at a powerful rate and level of sophistication for research in fields ranging from the physical and social sciences to biological sciences, and for commercial product development.

“Computational science, which combines the crucial discipline of simulation and the exploding discipline of ‘big data,’ is central to all fields of human endeavor, science, society and industry,” said Robert Harrison, PhD, Professor and Director of the IACS. “This cuts across all of Stony Brook University, and I like to think of the IACS as being an institute without walls between disciplines since computational science is so multidisciplinary.”

Stony Brook and Brookhaven National Laboratory obtained a $1 million grant in 2014 from the Long Island Research and Economic Development Council (LIREDC) for the purchase of the computer cluster. The grant is part of a broader initiative by Stony Brook and BNL to boost job creation throughout the entire region and state. The funding source for LIREDC is the New York State’s Empire State Development program, and the IACS will receive the funds through the SUNY Research Foundation.

Assemblymen Steve Englebright congratulated Stony Brook University for having the vision to develop the IACS and called it a tremendous example of innovation, research and education for the community, Long Island and New York State.

All attending the grand opening had the opportunity to see the new computer cluster and to tour the new facility, which, incredibly, includes about 10 miles of high-speed network cables. In addition to the computer cluster, the IACS features 18 offices, a 45-seat seminar room, and state-of-the-art audiovisual systems.

Professor Harrison expects the IACS to grow considerably in the coming years. Currently, there are 11 core faculty representing a cross-disciplinary range of departments in the physical and social sciences, along with 23 associated faculty from Stony Brook and other institutions. Student research will also thrive at the IACS, as 43 core and 60 affiliate graduate students have access to IACS resources to advance their work.

About the Institute for Advanced Computational Science (IACS) at Stony Brook

The IACS includes an integrated, multidisciplinary team of faculty, students and staff that work in many disciplines, including chemistry, materials by design, condensed matter, astrophysics, atmospheric science, nano-science, sociology, applied mathematics and computer science, in order to jointly define new frontiers and opportunities for discovery through computation. The IACS collaborates closely with the Computational Science Center at Brookhaven National Laboratory, which specializes in large-scale data analysis.