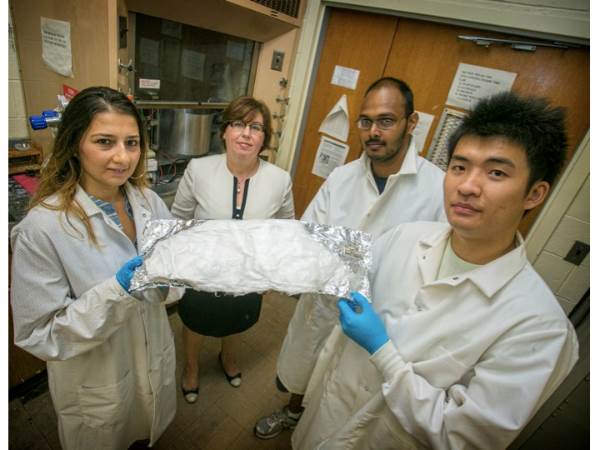 Stony Brook, New York—September 14, 2015—A Stony Brook University research team has been awarded a $935,056 grant from the National Science Foundation (NSF) to develop the continuous production of three-dimensional, self-supported, ceramic nano-fibrous materials that will act as photocatalysts for new energy production using water ponds as reactors. This project is led by Principal Investigator Pelagia Gouma, PhD, Professor in the Department of Materials Science & Engineering.

The focus of this grant is to advance ceramic nanofiber electrospinning to produce a high process yield of photocatalytic blankets, with process and product repeatability and reproducibility along with optimized quality control. The anticipated result is a commercially-viable, high-throughput, nano manufacturing process that produces functional nano-ceramics in large volumes and at a low cost. Processing of advanced photocatalysts for solar energy conversion to hydrogen fuel through water splitting is one of the targeted applications for the electrospun oxides addressed by this award.

Based on an advanced manufacturing method developed in Dr. Gouma’s lab, the processing of high-throughput electrospinning for the production of continuous nano-fibrous nanomats/”ceramic cloths” will yield nanomats that will float on water and act as photocatalytic blankets using just the sunlight to release energy from water splitting.

Professor Gouma’s research breakthrough of the electrospun photocatalytic nanogrids, one of the key technologies to be manufactured by the high-throughput process in development under the Scalable Nano Manufacturing project, was highlighted by the NSF Director, Dr. Cordova, during her Congressional testimony in February 2015.  For more background on the testimony and Professor Gouma’s nanogrid research, see this story. To view the Congressional testimony, see this video (Professor Gouma’s research cited at 17:04 on the counter).

“Our team brings expertise in materials manufacturing, nano-materials synthesis, electrochemistry and mechanical engineering,” said Dr. Gouma.  “Together we hope to address fundamental issues that are expected to revolutionize industrial processes for the nano-manufacturing of nanofibrous mats for energy-related applications; we also plan to add to the skilled workforce that will guide the growth of new industries for nanomaterials manufacturing, thus creating more jobs.”

“This distinguished NSF Award is a testament to the groundbreaking, collaborative research taking place between scientists at Stony Brook University and Brookhaven National Laboratory,” said Dennis N. Assanis, Provost and Senior Vice President for Academic Affairs at Stony Brook University. “It is also indicative of the University’s commitment to energy research, as well as to clean energy and energy conservation initiatives. I applaud Dr. Gouma and her team on their receipt of this grant, which will have a significant impact on the nanomaterials manufacturing industry.”

This project is jointly funded by the Engineering Directorate and the Division of Materials Research in the Mathematical and Physical Sciences Directorate.