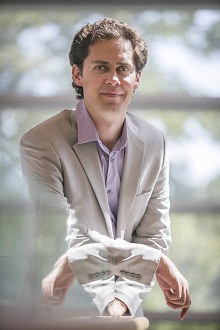 STONY BROOK, NY, USA – August 18, 2015:  Today, MIT Technology Review reveals its annual list of Innovators Under 35. For over a decade, the global media company has recognized a list of exceptionally talented technologists whose work has great potential to transform the world. For his work in the field of computer accessibility, Stony Brook University’s Yevgen Borodin PhD ’09 has been recognized as a humanitarian in the Internet and Web category.

Dr. Borodin is a Research Assistant Professor in the Department of Computer Science and his innovations have pushed the envelope in computer

accessibility research and, today he is regarded as one of the leading researchers in the field of computer accessibility.  Dr. Borodin has invented an array of methods for improving web accessibility and usability for people with vision impairments, greatly enhancing their productivity with the Web. MIT Technology Review’s recognition primarily focuses on Borodin’s invention, Capti Narrator, a universally-accessible application empowering users to read and/or listen to textual content from different sources, formats, and on different platforms. Capti Narrator (www.captivoice.com) is already used by hundreds of thousands of people around the world for productivity, education, entertainment, and as an assistive technology.

To accelerate the delivery of his innovations to the people who need the Web to be more accessible (at least 25 Million people in the U.S. and 10 times as much worldwide), Dr. Borodin founded Charmtech Labs LLC through which he is commercializing his innovative research. The technology developed by Charmtech Labs is usable to the largest extent possible by anyone and in any circumstance. For example, Capti is used by people with dyslexia, vision impairments, students, busy professionals, and commuters.

“Over the years, we’ve had success in choosing young innovators whose work has been profoundly influential on the direction of human affairs,” says editor in chief and publisher Jason Pontin. “Previous winners include Larry Page and Sergey Brin, the cofounders of Google; Mark Zuckerberg, the cofounder of Facebook; and Jonathan Ive, the chief designer of Apple. We’re proud of our selections and the variety of achievements they celebrate, and we’re proud to add Yevgen Borodin to this prestigious list.”

This year’s honorees will be featured online at www.technologyreview.com starting today, and in the September/October print magazine, which hits newsstands worldwide on September 1. They will appear in person at the upcoming EmTech MIT conference November 2–4 in Cambridge, Massachusetts (www.EmTechMIT.com).

Dr. Borodin was recently recongizedin the University’s inaugural Forty under 40 Alumni Awards in 2014.

“Capti provides a unified interface – I can just use Capti, and don’t have to switch applications anymore. I just search and add content to the playlist.” – Chieko Asakawa, PhD, IBM Fellow leading accessibility research projects both within and outside of IBM.  Asakawa lost sight when she was 14 years old due to a swimming accident.

MIT Technology Review, which is wholly owned by MIT, creates award-winning technology-related editorial content on a variety of platforms for an audience of millions of business leaders, innovators, and thought leaders, in six languages and in 147 countries. At www.technologyreview.com, readers access daily news and analysis, and the award-winning
MIT Technology Review magazine has set the standard for technology publications since 1899. In addition to producing engaging live events, the company manages the global entrepreneurial organization MIT Enterprise Forum.

​Part of the State University of New York system, Stony Brook University encompasses 200 buildings on 1,450 acres. Since welcoming its first incoming class in 1957, the University has grown tremendously, now with more than 24,600 students, 2,500 faculty and 20 NCAA Division I athletic programs. Its membership in the prestigious Association of American Universities (AAU) places Stony Brook among the top 62 research institutions in North America. U.S.News & World Report ranks Stony Brook among the top 40 public universities in the nation and Kiplinger named it the 33rd  best value in public colleges for in-state students and 26th for out-of-state students. One of four University Center campuses in the SUNY system, Stony Brook University co-manages Brookhaven National Laboratory, putting it in an elite group of universities that run federal research and development laboratories. As the largest single-site employer on Long Island, Stony Brook is a driving force of the regional economy, with an annual economic impact of $4.65 billion, generating nearly 60,000 jobs, and accounting for nearly 4 percent of all economic activity in Nassau and Suffolk counties and roughly 7.5 percent of total jobs in Suffolk County.