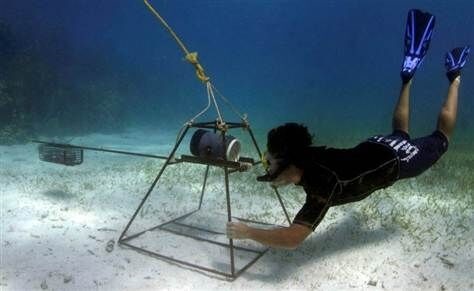 STONY BROOK, N.Y., July 8, 2015 – About one quarter of the world’s sharks, rays and skates are threatened with extinction. The lack of comprehensive and up-to-date data on species abundance and distribution hinders efforts to protect and replenish these important and dynamic marine animals.

​Demian Chapman, PhD, assistant professor at the School of Marine and Atmospheric Sciences, and a multi-institutional team have kicked off the Global FinPrint initiative, the first-ever global survey to inform shark and ray conservation.  The largest of its kind, FinPrint is a three-year survey of sharks and rays in coral reef ecosystems designed to provide fundamental data essential to building effective conservation programs. FinPrint is funded by Vulcan Inc. which was founded by Paul G. Allen.

“Global FinPrint will help us better understand one of the ocean’s great mysteries: What is happening with fragile marine ecosystems when sharks are removed?” said Dr. Chapman. “Are coral reefs healthier or faster to recover from disturbances like coral bleaching or hurricanes because they have sharks?  These are hugely important questions. Many countries rely on healthy coral reefs for food security, tourism and coastal protection.”


The survey portion of the Global FinPrint initiative will use baited remote underwater video (BRUVs) to survey sharks, rays and other marine life in coral reef ecosystems in more than 400 locations across three key geographic regions where data gaps exist: Indo-Pacific, tropical western Atlantic, and southern and eastern Africa and Indian Ocean islands. The new data will be consolidated with thousands of hours of existing BRUV data to form a single dataset for analysis to produce the first global standardized survey of shark, ray and skates in coral reef environments.

Survey data will be made available through an open-access database platform created by Vulcan Inc’s technology development team and will include information on species density, habitats and diversity trends. Researchers, policy makers, governments and others will be able use this database to help inform conservation priorities, such as identifying and protecting areas with large or important shark populations, and to better understand the ecological importance of sharks as apex predators.

Survey results will be made available in summer 2018.

For more information on the initiative, visit the Global FinPrint website at globalfinprint.org.

About Stony Brook University
Stony Brook University encompasses 200 buildings on 1,450 acres. Since welcoming its first incoming class in 1957, the University has grown tremendously, now with more than 25,000 students, 2,200 faculty and 20 NCAA Division I athletic programs. Its membership in the prestigious Association of American Universities (AAU) places Stony Brook among the top 62 research institutions in North America. U.S. News & World Report ranks Stony Brook among the top 40 public universities in the nation and Kiplinger named it the 29th best value in public colleges for in-state students and 20th for out-of-state students. One of four University Center campuses in the SUNY system, Stony Brook University co-manages Brookhaven National Laboratory, putting it in an elite group of universities that run federal research and development laboratories. As the largest single-site employer on Long Island, Stony Brook is a driving force of the regional economy, with an annual economic impact of $4.65 billion, generating nearly 60,000 jobs, and accounts for nearly 4% of all economic activity in Nassau and Suffolk counties, and roughly 7.5 percent of total jobs in Suffolk County.