Critically Endangered Ocean Giant is Reproducing Without Sex in the Wild 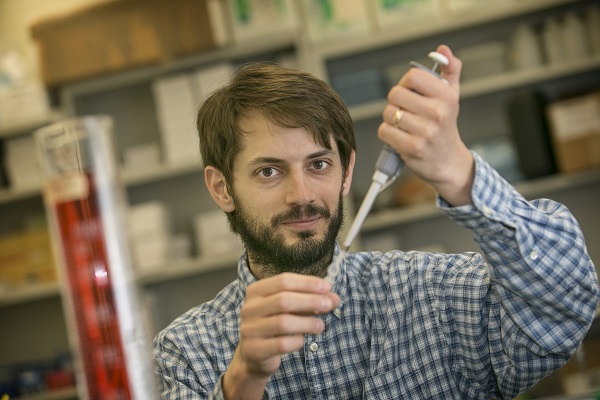 Critically Endangered Ocean Giant is Reproducing Without Sex in the Wild

About 3 percent of smalltooth sawfish from Florida estuary are products of “virgin birth.”

STONY BROOK, NY, June 1, 2015 – Are males truly essential for reproduction? Female birds, reptiles and sharks living in captivity have sometimes surprised their keepers by giving birth even though, as far as anyone can remember, they have never been housed with a male. Scientists used DNA analysis to solve this mystery some time ago, showing that these offspring were produced by asexual reproduction, a process called parthenogenesis, or “virgin birth.” Although these events have captured tremendous public interest, it was unknown if this ever occurred in wild populations of these animals.

Scientists at Stony Brook University, Florida Fish and Wildlife Conservation Commission, and The Field Museum have discovered that around 3 percent of the sawfish living in a Florida estuary are apparently the products of this type of reproduction, the first evidence of this in the wild for any vertebrate animal. These outwardly normal “parthenogens” live alongside other sawfish produced through normal sexual reproduction, suggesting that occasional virgin births may be more common in natural populations than ever suspected. The discovery, reported in a paper entitled

“Facultative parthenogenesis in a critically endangered wild vertebrate,” is published in the June 1, 2015 issue of the Cell Press journal Current Biology.

The smalltooth sawfish (Pristis pectinata) is one of five species of sawfish, a group of large rays known for their long, tooth-studded rostrum that is used to subdue small fish. Sawfish may be the first entire family of marine animals to become extinct because they are all critically endangered as a result of overfishing and coastal habitat loss. The race is on to save this species, which has disappeared from most of the places in the Atlantic where it was common a century ago and is now listed as endangered under the U.S. Endangered Species Act.

Today, smalltooth sawfish are mainly found in a handful of locations in southern Florida, including the Caloosahatchee and Peace rivers. It was here that scientists have discovered that these critically endangered ocean giants are sometimes breeding without sex. “We were conducting routine DNA fingerprinting of the sawfish found in this area in order to see if relatives were often reproducing with relatives because of their small population size,” said the study’s lead author, Andrew Fields, a Ph.D. candidate at the Stony Brook University’s School of Marine and Atmospheric Science. “What the DNA fingerprints told us was altogether more surprising; female sawfish are sometimes reproducing without even mating.”

thought to be triggered by an unfertilized egg absorbing a sister cell called the polar body that is nearly genetically identical to the egg. This results in an offspring that has roughly half the genetic diversity of its mother. In many cases these offspring are malformed or die early. “There was a general feeling that vertebrate parthenogenesis was a curiosity that didn’t usually lead to viable offspring,” said Dr. Gregg Poulakis of the Florida Fish and Wildlife Conservation Commission, who led field collections of the sawfish. “The seven parthenogens we found looked to be in perfect health and were normal size for their age. This suggests parthenogenesis is not a reproductive dead end, assuming they grow to maturity and reproduce.” The parthenogen sawfish were all tagged and released back into the wild as part of an ongoing study of sawfish biology and ecology.

The researchers are now encouraging others conducting similar studies to take a few moments to screen their DNA databases from other animals to see if there are hidden parthenogens living in other wild populations. “This could rewrite the biology textbooks,” said Dr. Kevin Feldheim of the Pritzker Laboratory at The Field Museum in Chicago, where the DNA fingerprinting was conducted. “Occasional parthenogenesis may be much more routine in the wild than previously thought.”

The research team speculates that since smalltooth sawfish are so rare, females might sometimes fail to find a male during the mating season, inducing the parthenogenetic process. “It is possible that parthenogenesis is most often expressed in wild vertebrates when the population is at very low levels and the animals have difficulty finding one another,” said Fields. “Parthenogenesis could help endangered species like sawfish dodge extinction for a little while, but it should also serve as a wake up call that we need serious global efforts to save these animals.”

For more information on the plight of sawfish and efforts to save them see: