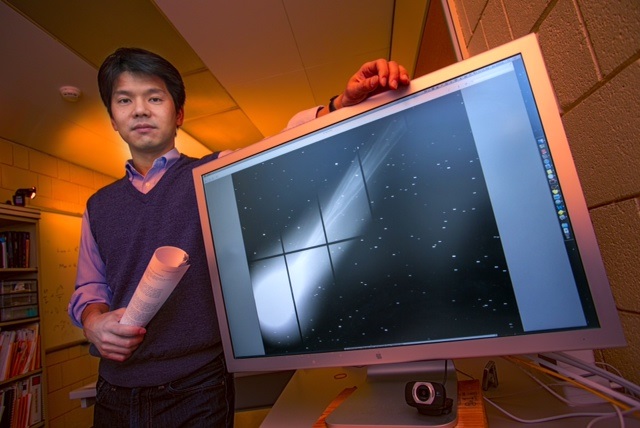 Stony Brook, NY – March 5, 2015 – A team of astronomy researchers from Stony Brook University, the National Astronomical Observatory of Japan, and Tsuru University are the first to reveal clear details about the rapidly changing plasma tail of the comet C/2013 R1 (Lovejoy). The observation and details behind the discovery are published in a paper in the March 2015 edition of the Astronomical Journal.

The team, Led by Jin Koda, PhD, Assistant Professor in the Department of Physics and Astronomy at Stony Brook University, captured the images by using the Subaru Telescope’s wide-field prime-focus camera, called Suprime-Cam, which resulted in gaining new knowledge regarding the extreme activity in that tail as the comet neared the Sun.

“My research is on galaxies and cosmology, but I always want to explore beyond these boundaries. Lovejoy was up in the sky after my targets were gone, and we started taking other images for educational and outreach purposes, and for curiosity,” said Dr. Koda. “The single image from one night revealed such delicate details along the tail that it inspired us further to take a series of images on the following night. When we analyzed these additional images, we realized that the tail was displaying rapid motion in a matter of only a few minutes. This was an incredible discovery.”

In the paper, titled “Initial Speed of Knots in the Plasma Tail of C/213 R1 (Lovejoy),” the researchers report short-time variations in the plasma tail of Lovejoy.