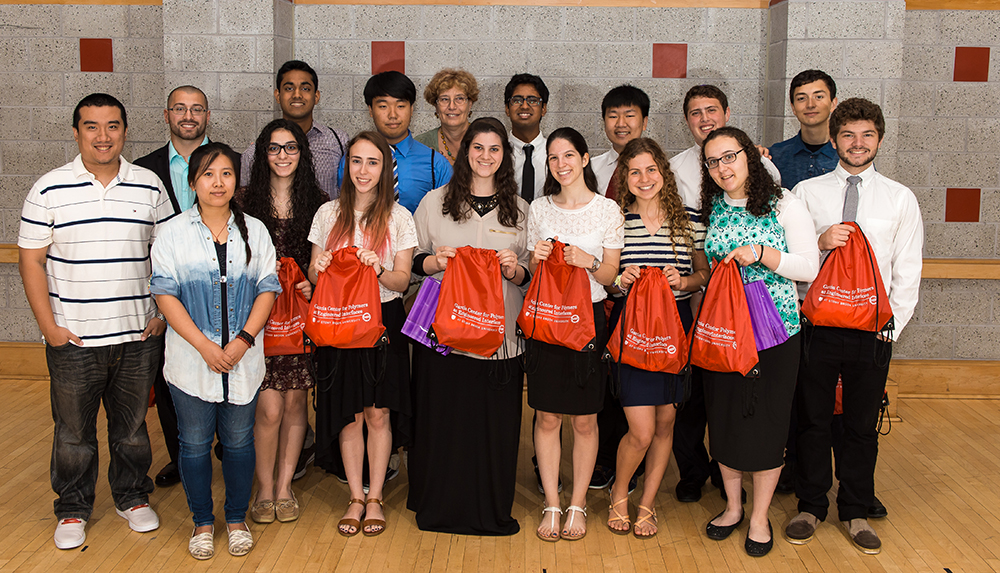 Stony Brook, NY, December 1, 2015 – Four high school students from around the country mentored by Stony Brook University faculty have been named national finalists in the 2015 Siemens Competition in Math, Science & Technology, one of the nation’s leading research competitions for high school students. These four students will be competing in Washington, DC, December 4-8, for additional scholarship awards, including a top team prize of $100,000.

All of the four students were previously named Regional Siemens Competition Winners and each participated in Stony Brook’s Garcia Research Scholar Program, directed by Professor Miriam Rafailovich, PhD, (Material Sciences & Engineering). The program, supported by the National Science Foundation and the Morin Trust, encourages high school, undergraduate, and graduate students to work together with faculty in interdisciplinary groups on cutting edge STEM research problems. Each student is heading to the national finals competition in the team winners category.

Research on microbial water purification and power generation earned Kimberly Te, of Manhasset Senior High School, the title of winning team for region four, a $6,000 shared scholarship and a spot in the finals. Kimberly was co-mentored by Professor Rafailovich and Stephen Walker, PhD, Associate Professor in the Department of Oral Biology and Pathology at Stony Brook University School of Dental Medicine.

The team engineered a device made of natural, sustainable materials that cleans up oil-polluted areas, and uses the otherwise unusable oil to generate clean energy to be used to power remote sensors. Kimberly studied the biological effects of pollution on organisms and wanted to focus her research on cleaning up pollutants, specifically oil.

Research on 3-D tissue printing earned Daniel Chae of Oakton, Va.; Alan Tan of Fremont, Calif.; and Sidharth Bommakanti, of Pleasanton, Calif., the title of winning team for region six, and a $6,000 shared scholarship and a spot in the finals. The team was mentored by Adrianna Pinkas-Sarafova, Adjunct Assistant Professor Department of Material Sciences & Engineering in the School of Engineering and Applied Sciences.

The results of their project, titled “A Novel Study on the Effect of Surface Topography of 3-D Printed PLA Scaffolds on Dental Pulp Stem Cell Proliferation and Differentiation in vitro,” show promise in combining the fields of stem cell research and material science to improve human health. The team examined 3-D printed structures as a novel substrate for dental pulp stem cells for use in implants. Using 3-D printed scaffolds to create dental implants, they laid the groundwork for engineering tissues for the future. The rising interest in 3-D printing applications and the potential for stem cells to advance the repair of hard and soft tissues inspired the team to pursue the research.

Earlier this month, the four Stony Brook-mentored students presented their research to a panel of judges at the Georgia Institute of Technology and Carnegie Melon, who named them winners in two regions of the competition. Next they will present their work at the National Finals competition at George Washington University.