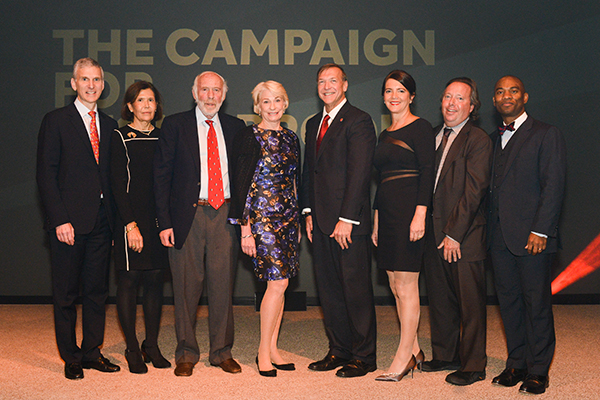 The Campaign Has Already Raised More Than $425 million

Stony Brook NY—November 23, 2015—On November 21, Stony Brook University launched the public phase of a seven-year, $600 million comprehensive campaign. The capital campaign, led by the Stony Brook Foundation, is the largest in the history of the State University of New York. More than 30,000 individuals have already donated a total of $426 million and the Foundation expects to raise the remaining $174 million by July 2018.

The campaign will fund priorities across campus that are crucial to enhancing further the University’s already extraordinary record of achievement, with an emphasis on increasing financial aid support to students, creating a total of 100 endowed faculty positions, and bolstering our research productivity.

The campaign kicked off in 2011 with a lead gift of $150 million by James and Marilyn
Simons. Forty-six other individuals have since donated gifts of at least $1 million, and some of the University’s most prominent supporters have joined the Simons in becoming co-chairs of the campaign. The co-chairs are:

“Jim and Marilyn Simons gave Stony Brook one of the largest gifts ever to a public research university, and that gift has become even greater – inspiring this entire campaign and the further generosity of tens of thousands of Stony Brook alumni and friends,” said Stony Brook University President Samuel L. Stanley Jr., MD. “Philanthropy is Stony Brook’s margin of excellence, and this campaign will continue to take our students, faculty and entire campus community far beyond expectations.”

“Philanthropy is what sets Stony Brook University apart,” said Richard Gelfond, President of the Stony Brook Foundation and CEO of IMAX. “It’s what enables the University to attract world-class professors, create cutting-edge research facilities, and recruit the most promising students. And it allows us to fulfill the ideals of a public research university and have an impact as one of the world’s great universities.”

Among the campaign’s many goals will be to substantially increase the University’s endowment, which provides the continuity and stability needed to plan and grow. Stony Brook’s $145 million endowment remains well below the $1.8 billion average of its peer schools in the Association of American Universities. In addition, while a public university, Stony Brook receives only 18 percent of its annual operating budget from the State of New York.

“Stony Brook University is only 58 years old, and it’s already among the world’s great universities,” said Dexter Bailey, Senior Vice President for Advancement at Stony Brook University and Executive Director of the Stony Brook Foundation. “The University’s potential is unlimited, and with the momentum of this campaign, we aspire to engage many others in our shared vision to prepare tomorrow’s leaders for the great challenges of our time.”

Stony Brook University is one of America’s most dynamic public universities, a center of academic excellence and an essential part of the region’s economy. U.S. News & World Report ranks Stony Brook one of the top 100 universities in the nation and one of the top 40 public universities. A member of the prestigious, invitation-only Association of American Universities, Stony Brook is one of the 62 leading research institutions in North America and the co-manager of Brookhaven National Laboratory. Nobel laureates, Guggenheim fellows and MacArthur grant winners teach on our campus, making it a magnet for outstanding students. The University offers more than 200 undergraduate and more than 140 graduate programs and has more than 25,200 students.

The University’s reach also extends to a Research and Development Park, four business incubators, Stony Brook Manhattan, our Southampton campus on Long Island’s East End, and to SUNY Korea, a partnership between Stony Brook University, the State University of New York (SUNY) and the South Korean government. Songdo-based SUNY Korea opened its doors in March 2012 as the first American university established on Korean soil. Additional information is available at https://www.stonybrook.edu.


About the Stony Brook Foundation

This year marks the 50th Anniversary of the Stony Brook Foundation, which has been essential to achieving Stony Brook University’s margin of excellence and enabling the University to be ranked in the top 1 percent of the world’s higher education institutions. In just 50 years, the Foundation has raised more than $800 million to support the University’s mission. Those funds have enabled the University to create centers of excellence, establish global leadership in key areas of research, and compete successfully for the best students and faculty, all while helping keep tuition low and affordable. With New York State providing only 18% of the University’s total operating budget, the Foundation has played and continues to play an essential role in the life and advancement of the University.