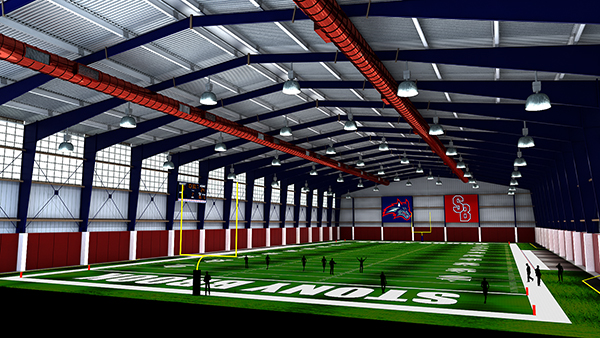 The Dubin Challenge will inspire Seawolves Family, Friends, and Fans to Meet the Match

October 15, 2015 — Stony Brook University alumnus, Glenn Dubin (’78, ’12) and his wife Eva, announced today a $5 million pledge in the form of a 1:1 matching challenge grant, setting the stage for the Stony Brook Foundation and Stony Brook Athletics to complete a $10 million fundraising goal to build a new Indoor Training Center through Together We Transform, a five-year comprehensive plan launched by Stony Brook Athletics in June. All gifts received between July 1, 2015 and June 30, 2016, restricted for the Indoor Training Center Fund, will be counted toward the goal.

“Over the past decade, Glenn and Eva Dubin have shown incredible vision and had a tremendous impact on Stony Brook Athletics,” said University President Samuel L. Stanley Jr., M.D. “This new challenge match gives others the opportunity to play an active role in the success of our student athletes and our Athletic program.”

The new state-of-the-art indoor practice facility and complex will be sited in close proximity to Kenneth P. LaValle Stadium and designed to feature a 100-yard indoor multi-purpose synthetic turf practice field. The design includes innovative lighting, filming equipment, sound and video systems, and a 90-foot ceiling clearance height; it will also contain support facilities including restrooms and storage. The new indoor practice facility will also be designed for multi-use allowing all Stony Brook intercollegiate athletic teams to have a place to practice and train all year round.

“With this challenge pledge, I hope to inspire Seawolves friends, fans and family to support current and future Stony Brook student-athletes,” said Glenn Dubin. “We wanted to kick-start this campaign and rally the Stony Brook community around the athletic department. Stony Brook Athletics has substantial and significant aspirations for the near future, and excellent facilities are a necessary component to realize these aspirations and achieve success.”

The G&E Dubin Family Foundation donated $4.3 million to Stony Brook Athletics in 2010 for the creation of an 8,000 square foot strength and conditioning facility named the Dubin Family Athletic Performance Center which opened in 2012. Dubin, who played both football and lacrosse at Stony Brook, supports Seawolves athletics as a regular attendee at men’s lacrosse and football games. In 2005 he donated $1 million to Stony Brook to create the Glenn Dubin Endowed Scholarship Fund, offering scholarships to students from Washington Heights, particularly to students from P.S. 132, where he attended elementary school.

“This new Indoor Training Center is the priority facility need for Stony Brook Athletics as part of our five-year vision, Together We Transform,” said Stony Brook University Athletic Director Shawn Heilbron. “Our objective is to positively transform the life of each student-athlete, and this project will benefit the more than 435 student-athletes that comprise our teams. I am extremely grateful to the Dubin family for their belief in our program and for their sincere generosity.”

“I’ve had the privilege to get to know Glenn over the last few years and I have always been impressed by how proud he is of his alma mater and how he wants to do whatever he can to help our great University,” head football coach Chuck Priore said. “It is people like Glenn and Eva and their willingness to support not just the football program, but all of Stony Brook Athletics, that will help take us to new heights. This gift will have an immediate impact on our football program and our ability to recruit top-student-athletes.”

About Glenn Dubin
Glenn Dubin is the Founder and Principal of Dubin & Co. LP, a private investment company based in New York managing a diversified portfolio of operating businesses and other investments.  Mr. Dubin is also the Co-Founder of Highbridge Capital Management LLC, an alternative asset management company established in 1992 where he served as CEO. During Mr. Dubin’s tenure, Highbridge evolved from a multi-strategy hedge fund into a diversified alternative asset management institution.  In late 2012, Mr. Dubin, along with a group of prominent global investors, acquired Castleton Commodities International LLC (formerly Louis Dreyfus Highbridge Energy), a global merchant energy company active in the physical and financial commodity markets and infrastructure investing.  Mr. Dubin is the lead shareholder and Non-Executive Chairman of the company.

Mr. Dubin is a founding Board member and former Board chair of the Robin Hood Foundation, a philanthropic organization in New York that applies investment principles to charitable giving.  He is also a Board member of Mount Sinai Medical Center and the Museum of Modern Art and is a member of the Dean’s Executive Committee of the Harvard Kennedy School.

About Stony Brook University
Part of the State University of New York system, Stony Brook University encompasses 200 buildings on 1,450 acres. Since welcoming its first incoming class in 1957, the University has grown tremendously, now with more than 25,000 students and 2,500 faculty. Its membership in the prestigious Association of American Universities (AAU) places Stony Brook among the top 62 research institutions in North America. U.S. News & World Report ranks Stony Brook among the top 40 public universities in the nation and Kiplinger named it one of the 35 best values in public colleges. One of four University Center campuses in the SUNY system, Stony Brook co-manages Brookhaven National Laboratory, putting it in an elite group of universities that run federal research and development laboratories. Stony Brook is ranked in the top 2 percent of the world’s higher education institutions by the Times Higher Education World University Rankings. It is one of only 10 universities nationwide recognized by the National Science Foundation for combining research with undergraduate education. As the largest single-site employer on Long Island, Stony Brook is a driving force of the regional economy, with an annual economic impact of $4.65 billion, generating nearly 60,000 jobs, and accounts for nearly 4 percent of all economic activity in Nassau and Suffolk counties, and roughly 7.5 percent of total jobs in Suffolk County.

About Together We Transform

Launched on June 29, 2015, Together We Transform offers an aggressive strategic plan that provides a blueprint for Stony Brook’s goal of being recognized as a premier NCAA Division I athletic department. This vision offers clear aspirations and detailed action items that will enable Stony Brook to effectively position itself in the highly fluid national landscape while supporting the university’s overarching goals.Together We Transform is comprised of eight transformational elements that will guide the future of Stony Brook Athletics and provide the foundation upon which a structure of sustainable success can be built. Each element contains specific goals and objectives that will be driven by our vision to positively transform the life of each student-athlete. The eight transformational elements are:

Although prioritization will occur within each of the transformational elements, Stony Brook Athletics will work toward the goal of accomplishing all of them by 2020. The end result will be a complete transformation of the athletic department at Stony Brook, which will ultimately benefit the university in a profoundly positive manner by raising the institutional profile to new heights.

About Seawolves United
Seawolves United, the new primary fundraising arm of the department that will fuel Together We Transform, is designed to build meaningful personal relationships that connect individuals to Stony Brook Athletics by aligning their philanthropic interests with our strategic priorities.

The goal of Seawolves United is to build relationships with Stony Brook supporters that will generate a new level of unrestricted giving to the department.  Members of Seawolves United will play a critical role in the vision to create transformational experiences for student- athletes that will complement their academic, athletic and personal pursuits.

To read Together We Transform in its entirety and learn more about Seawolves United, visit SeawolvesUnited.com or call 631-632-6312.