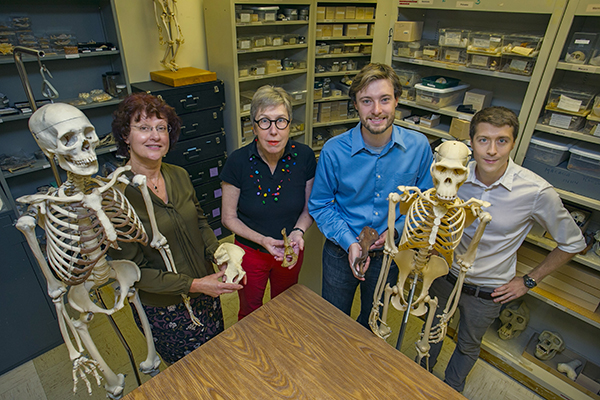 STONY BROOK, N.Y., October 6, 2015 – A research team led by Stony Brook University investigating human and chimpanzee locomotion have uncovered unexpected similarities in the way the two species use their upper body during two-legged walking. The results, reported in
Nature Communications
, indicate that our early human ancestors, including the famous fossil ‘Lucy’ (a species known as Australopithecus afarensis), may have been able to use their torsos to increase walking efficiency in the same way as modern humans.

The torso (the part of the body that includes the ribcage, belly and pelvis) of chimpanzees has long been thought to be a rigid block, best suited for a life of tree climbing. Humans, on the other hand, have long and flexible torsos that aid in walking by allowing us to rotate our upper body in the opposite direction of our lower body. The findings from the paper, titled “Surprising trunk rotational capabilities in chimpanzees and implications for bipedal walking proficiency in early humans,” changes the evolutionary view of how early human ancestors walked and what they were able to do.

“During walking, we actually observed as much rotation within the torsos of chimpanzees as in humans,” said Nathan Thompson, lead author and a PhD student in the Department of Anatomical Sciences at Stony Brook University. “This means that the widely accepted assumptions in the scientific community about how the chimpanzee torso works based on the skeleton alone are incorrect. Our results also point to the notion that a limitation to upright walking that we thought affected Lucy and other early human ancestors probably was not a limitation at all.”

The research team used high-speed cameras to track and compare how the torsos of humans and chimpanzees actually moved during bipedal walking. They studied the movements by way of three-dimensional kinematic analyses and computer-generated comparisons.

They discovered that the main difference between human and chimpanzee bipedalism is that chimps swing their hips much more.

“Only when our early ancestors were able to reduce this hip rotation were their upper bodies able to play a human-like role in promoting efficient bipedal walking,” said Thompson. “When this actual transition occurred is still an open question.”

There is a continuing debate about how the hips of our ancestors worked compared to ours.

“For instance, depending on who you ask, the 3.2 million-year-old Lucy fossil either rotated her pelvis exactly like modern humans or up to 2.5

Given this uncertainty, the research team modeled the transition from a more chimp-like pattern of the upper body movement to that of a more human-like pattern. They found that even if Lucy rotated her pelvis 50 percent more than modern humans, her upper body would have functioned essentially like ours. This means that even as early as 3.2 million years ago Lucy might have been able to save work and energy in much the same way as humans do today.

“As we get a better idea of how our closest living relatives move, we are able to learn much more about the isolated piles of early human bones that the fossil record leaves us,” added Thompson. “Only then can we paint a complete picture of how we evolved into what we are today.”

Co-authors on the paper include Susan Larson, Brigitte Demes, and Nicholas Holowka of Stony Brook University, and Matthew C. O’Neill of the University of Arizona.

The research was funded by the National Science Foundation and The Leakey Foundation.

Part of the State University of New York system, Stony Brook University encompasses 200 buildings on 1,450 acres. Since welcoming its first incoming class in 1957, the University has grown tremendously, now with more than 24,600 students and 2,500 faculty. Its membership in the prestigious Association of American Universities (AAU) places Stony Brook among the top 62 research institutions in North America. U.S. News & World Report ranks Stony Brook among the top 40 public universities in the nation and Kiplinger named it one of the 35 best values in public colleges. One of four University Center campuses in the SUNY system, Stony Brook co-manages Brookhaven National Laboratory, putting it in an elite group of universities that run federal research and development laboratories. Stony Brook is ranked in the top 2 percent of the world’s higher education institutions by the Times Higher Education World University Rankings. It is one of only 10 universities nationwide recognized by the National Science Foundation for combining research with undergraduate education. As the largest single-site employer on Long Island, Stony Brook is a driving force of the regional economy, with an annual economic impact of $4.65 billion, generating nearly 60,000 jobs, and accounts for nearly 4 percent of all economic activity in Nassau and Suffolk counties, and roughly 7.5 percent of total jobs in Suffolk County.