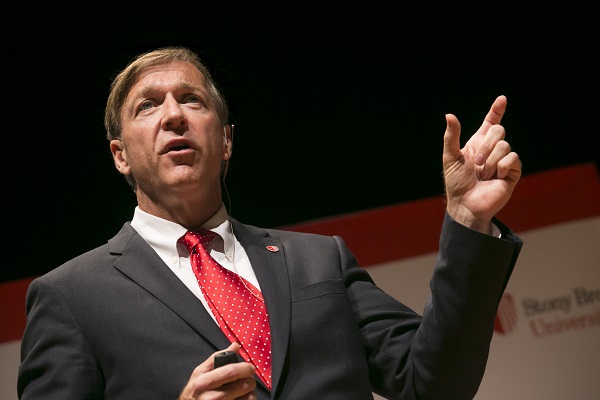 September 18, 2015 – In delivering his sixth State of the University Address on Wednesday, Stony Brook University President Samuel L. Stanley Jr., MD, expressed his most optimistic view of the University’s future since becoming president in 2009. He highlighted the growth of capital projects on both main and Medicine campuses, and brought attention to the faculty research that received attention around the world; reinforced the importance of continued federal, state and philanthropic support; and announced a new plan to renovate and update the Frank Melville Jr. Memorial Library.

President Stanley talked about the overall growth of the University, described its national and global reach, and pointed out the upward trend in caliber of students, citing that the class of 2019 is the most competitive and selective ever in terms of average GPA and SAT scores. He praised the work coming out of the Economic Development Office, noting recent awards including the federally-funded Bioscience Hub and the most recent New York State Center for Advanced Technology (CAT) award, bringing Stony Brook’s total number of CATs to three, an unprecedented distinction for any SUNY campus. He also highlighted that Stony Brook is home to 18 Start-Up NY companies, including one from Korea.
He spoke optimistically about the future of the University and its continued commitment to managing costs and resources with initiatives like Project 50 Forward, which has saved the University more than $48M in operating expenditures since its introduction during the past four years. He praised the success of NYSUNY 2020 legislation and described how it helped manage tuition costs; advanced Stony Brook’s completion agenda with a four-point rise in four-year graduation rate; and resulted the hire of 243 new world-class faculty, many of whom are contributing to Stony Brook’s growing sponsored research expenditures, up 5.5 percent in the past year alone.
President Stanley also introduced the new plan to create the new Melville Library Knowledge Commons, a renovation project that will take place during the winter intercession.
“Renovation of the Melville Library Knowledge Commons will begin in December 2015 and completed by the start of 2016 spring semester,” he said to resounding applause. He went on to say that the Library is a fantastic space and that it needs to be better utilized, made more user-friendly, bring in new furniture and upgrade the learning spaces to be equipped with state of the art technology.
He also mentioned the planned renovation of the Student Union that will commence within the year, and reinforced a commitment to a five-year capital plan for critical maintenance projects to improve the University’s infrastructure. He emphasized the importance of student programs that have been introduced on campus to promote tolerance, safety, and equality, including Green Dot, Red Watch Band, HeForShe, StandUp and Safe Space.
Finally, Dr. Stanley emphasized the importance of philanthropy, praising the University’s Advancement Office for raising more than $428M in four years, and referenced the upcoming capital campaign to support faculty, infrastructure, scholarships and student financial aid, and for providing access to excellence.
To watch/listen to the full University Address visit http://bit.ly/1KjMLRG.