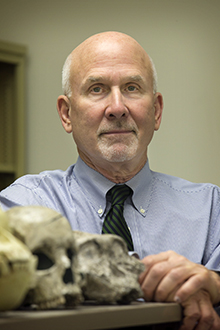 STONY BROOK, N.Y., May 7, 2015 – Randy Susman, PhD, an expert in Biological Anthropology and a Professor in the Department of Anatomical Sciences at Stony Brook University for more than 25 years, has been named Chair of the Department, announced Kenneth Kaushansky, MD, Senior Vice President, Health Sciences, and Dean of the School of Medicine. Dr. Susman’s tenure as Chair of Anatomical Sciences begins on May 10.

Dr. Susman will head an academic department that is internationally recognized for its research related to anthropology and evolution. Faculty in the Department of Anatomical Sciences include prominent researchers in the fields of anthropology, vertebrate paleontology and systematics, and functional morphology. The department also provides comprehensive training to medical students, and to graduate students in order to prepare them to research and teach in the areas of evolutionary morphology, functional morphology, musculoskeletal biology, systematics, and vertebrate paleontology.

A Stony Brook professor since 1988, Dr. Susman has excelled as a researcher and educator.

In the research realm, he has studied the early fossil record of human evolution, particularly the paleoanthropology of the Plio-Pleistocene of East and South Africa. Part of this work, on the earliest hominins including “Lucy” and also later fossils including the earliest members of the genus Homo, is based on the comparative morphology of apes and humans, and the behavior of pygmy chimpanzees, studied in the Democratic Republic of Congo (formerly Zaire). Comparative findings have come from experimental studies of human and ape locomotion.

Dr. Susman has received funding from the NSF for studies of wild apes as well as funding together with colleagues in Anatomical Sciences for experimental laboratory studies. Additional support for studies of early hominins and wild apes has come from the National Geographic Society, the L.S.B. Leakey Foundation and the World Wildlife Fund.

Based on his work in DRC, Dr. Susman helped establish the Lomako Forest Bonobo (pygmy chimpanzee) reserve, a 300,000 ha reserve in Equateur, DRC, negotiating the agreement with the government of DRC, the World Wildlife Fund, and a German lumber company.

Regarding his teaching in the School of Medicine, Dr. Susman focuses on human anatomy, including dissection-based gross anatomy, and in anthropology he has lectured on the fossil record of early hominin evolution and primate comparative functional morphology. Together with colleagues in the Department of Anatomical Sciences and colleagues in the Department of Art, Dr. Susman has also taught anatomy for artists.

Dr. Susman received his PhD in Biological Anthropology from the University of Chicago in 1976. He has also penned over 50 peer-reviewed papers, as well as an edited volume of the anatomy and behavior of the pygmy chimpanzee, a number of editorials, and a number of entries on primates in the World Book Encyclopedia.

Outside of his academic responsibilities and accomplishments at Stony Brook, Dr. Susman is Stony Brook’s Faculty Athletics Representative.