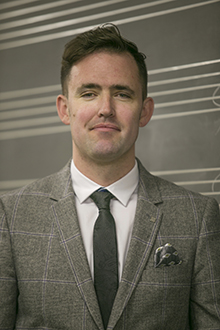 STONY BROOK, NY, May 4, 2015 – Two Stony Brook University scholars in the College of Arts and Sciences — Matthew Barnson and Rowan Ricardo Phillips — have been named 2015 Guggenheim Fellows based on “distinguished achievement in the past and exceptional promise for the future.” Guggenheim fellowships are intended for faculty who have already demonstrated exceptional capacity for productive scholarship or exceptional creative ability in the arts.” Barnson and Phillips were selected as part of a diverse group of 175 scholars, artists and scientists on the basis of prior achievement and exceptional promise. They were chosen from among more than 3,100 applicants.

Awarded at 2015 Guggenheim Fellowship in the category of Music Competition, Matthew Barnson’s music has been described as an attempt to negotiate between classical forms and European and American avant-gardes, and between noise and pure tone. He juxtaposes these extremes to create a challenging musical language that is viscerally expressive and dramatically structured, using pulsing rhythmic energy to create music that veers between extremes of fragility and violence. More than any over-determining system, his work is governed by the physicality of the instruments and voices, and many works are marked by the gradual introduction of different playing techniques: glassy harmonics, skittish string-crossings, snap pizzicato, and climaxes of brutal sawing that often resolve to uneasy calm.

His work has been recognized with awards and commissions from the Barlow Endowment, Aaron Copland House, NewMusicUSA, Jerome Foundation, Yale University and the American Academy of Arts and Letters.  Barnson studied at the Eastman School of Music, the University of Pennsylvania, the Institute for Research and Coordination in Acoustics/Music (IRCAM) and Yale with Christopher Rouse, Joseph Schwantner, Steven Stucky, Augusta Read Thomas, Martin Bresnick, Ezra Laderman, Ingram Marshall, David Lang and, briefly at Acanthes, with Wolfgang Rihm.

Awarded a 2015 Guggenheim Fellowship in the category of Poetry, Phillips is using his award to complete a trilogy started with The Ground:

poems, followed by Heaven, poems to be published in June. The Ground won numerous awards including a 2013 Whiting Writers Award, the 2013 PEN/Joyce Osterweil Award for Poetry and the 2013 Great Lakes Colleges Association New Writer Award in Poetry; it was also a finalist for the 2012 Los Angeles Times Book Prize for Poetry and a finalist for the NAACP Image Award for Outstanding Literary Work in Poetry.

“It’s exciting to name 175 new Guggenheim Fellows,” Edward Hirsch, president of the Foundation, said of the new Guggenheim Fellows.  “These artists and writers, scholars and scientists, represent the best of the best. Since 1925, the Guggenheim Foundation has always bet everything on the individual, and we’re thrilled to continue the tradition with this wonderfully talented and diverse group. It’s an honor to be able to support these individuals to do the work they were meant to do.”

United States Senator Simon Guggenheim and his wife established the John Simon Guggenheim Memorial Foundation in 1925 as a memorial to a son who died April 26, 1922. The Foundation offers Fellowships to further the development of scholars and artists by assisting them to engage in research in any field of knowledge and creation in any of the arts, under the freest possible conditions and irrespective of race, color, or creed. The Foundation receives between 3,500 and 4,000 applications each year. Although no one who applies is guaranteed success in the competition, there is no prescreening: all applications are reviewed. Approximately 200 Fellowships are awarded each year.