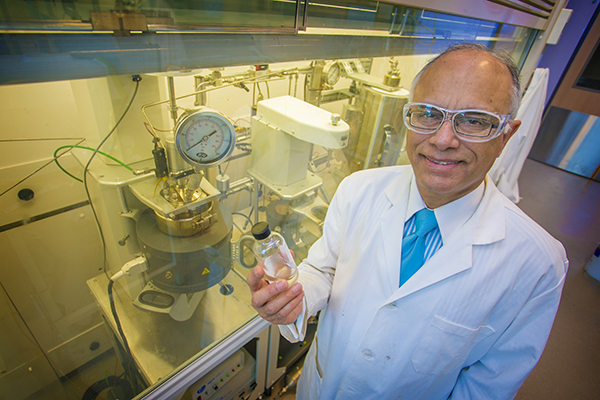 Stony Brook, N.Y., March 18, 2015 – Energy and environmental issues are both national and transnational in scope, and as such require the cooperation of experts and countries on a global scale. Stony Brook University is playing an important role in worldwide eco-partnership efforts, one research expert at a time, as Materials Science Professor Devinder Mahajan was selected by China to participate in its High-End Foreign Experts program. His first trip to China will be in April; he will travel there up to four times a year over the next three years.

Mahajan, who has been on the faculty at Stony Brook since 2002, recently served the U.S. Department of State as a Jefferson Science Fellow, working as a science advisor on energy foreign policy issues involving biofuels and natural gas. He holds a joint appointment in Stony Brook University’s Department of Materials Science and Engineering and Brookhaven National Laboratory’s Department of Sustainable Energy Technologies; his lab is based at the Advanced Energy Research and Technology Center, a New York State designated Center of Excellence, at Stony Brook University, where he also Co-Director of the Chemical and Molecular Engineering program.

During his time in China, Mahajan will be based at Tongji University in Shanghai, where he will engage students and faculty in research, and develop and teach a short course in the control and utilization of fugitive gases—the escaping methane (and CO2) gases from natural systems, landfills, and oil and gas operations that are a source of direct and indirect greenhouse gas emissions.

“Professor Mahajan’s work in low-carbon technologies is game-changing as the world contemplates and creates alternative energy resources—in this case, by utilizing waste as a resource,” said Stony Brook University President Samuel L. Stanley Jr., MD. “This is an excellent example of utilizing a New York State energy research and development facility – the Advanced Energy Center at Stony Brook – to promote international collaborations, and working with our partners at Tongji University in China will advance this initiative farther and faster than we could have ever imagined.”

Mahajan and Stony Brook University already have a cooperative relationship with Tongji University’s School of Environmental Science and Engineering for sharing technologies to promote the global use of biogas; the partnership centers around landfill biogas control and reutilization, with each University using local landfill sites for technology demonstrations. This EcoPartnership dates to an agreement signed at the U.S. Department of State in 2013 as part of the Fifth U.S.-China Strategic and Economic Dialog.

“Fugitive gases from landfills and other natural systems are of major concern to both China and the United States. As the State Key Laboratory for Pollution Control, Tongji University is keen on finding ways to control and utilize these greenhouse gases, and Tongji University is excited about the selection of Professor Mahajan as an expert in the Energy & Environment category under China’s highly competitive High End Foreign Expert program,” said Angel Liang, from the University International Exchange & Cooperation Office. “During Dr. Mahajan’s association with Tongji, we will benefit from his deep expertise in this area and work with him to establish a joint Energy and Environment center with focus on fugitive gases. We will also discuss student exchange, dual degree programs, and build research with joint China-US research grants to strengthen collaborations between our two Universities.”

China’s recruitment program for high-end foreign experts is aimed at foreign specialists who come to work in China for a short time. The experts are nominated by the president of a Chinese university in a specific field; applicants are evaluated by a selection committee in Beijing. The goal is to recruit scientists, experts in natural science and technology, humanities, and social science, and internationalized innovative teams that are capable of achieving critical technological breakthroughs, advancing the high-tech industries, and promoting new disciplines.

“China is also very interested in setting up a center for monitoring, control, and utilization of fugitive gases,” says Mahajan. “I will interact with multiple institutions in both the United States and China to facilitate setting up this center.”

“Stony Brook University is honored to have Dr. Mahajan, a national expert in the study of low carbon energy technology development and implementation, on its faculty,” said Dennis N. Assanis, Provost and Senior Vice President for Academic Affairs. “It is fitting that he be chosen to participate in China’s high-end foreign experts program, as this builds on his earlier work with China, Japan, Thailand and Korea to promote a low-carbon society and smart energy.”

Mahajan’s research focuses on low-carbon energy technology development and implementation. His investigations are centered around the chemical engineering/chemistry interface, aimed at developing clean fuel production technologies and CO2 mitigation. He is working to develop technologies that operate in skid-mounted (small-scale) units for production of fuels that can be used for cooking to reduce black carbon emissions and for transportation and power production.

“Stony Brook is honored that Dr. Mahajan has been chosen by China for this prestigious program,” says David O. Conover, Vice President for Research, Stony Brook University. “More importantly, Dr. Mahajan will have the opportunity to build on his existing relationships with Tongji University in the area of climate change research. Scientific collaborations across Nations like these are often a necessary prelude to cooperation on policies, in this case those involving the huge challenge of combatting global climate change.”