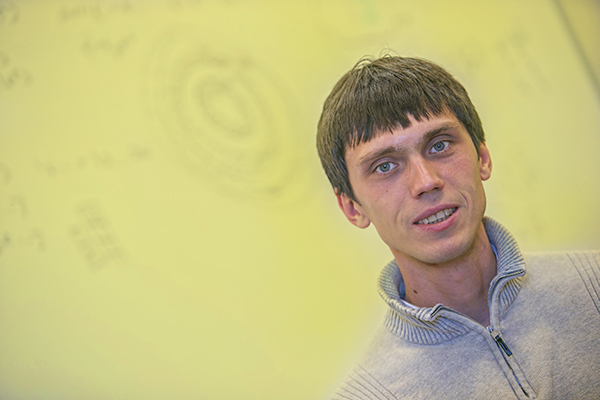 STONY BROOK, N.Y., Feb. 23, 2015 – Lukasz Fidkowski, PhD, an assistant professor of physics in the Department of Physics and Astronomy at Stony Brook University was selected for his research in theoretical condensed matter physics. In particular, he developed a classification of topological phases in one dimension, he carried out a calculation of the entanglement spectrum of topological insulators and superconductors, and he suggested the existence of the Majorana zero modes in one-dimensional quantum wires.Stony Brook University, has been selected to receive a 2015 Sloan Research Fellowship from the Alfred P. Sloan Foundation. He is one of 126 awardees from 61 colleges and universities in the United States and Canada chosen for this prestigious honor, which comes with a $50,000 two-year fellowship to further his research.

His discoveries extend and deepen our current understanding of the ordered states of matter and help uncover new properties of matter. Some of these properties may have useful applications, such as encoding quantum information, making it possible to use them as the building blocks of a quantum computer.

“As Provost, it makes me proud that Stony Brook University was able to attract such a remarkable junior faculty member such as Dr. Lukasz Fidkowski,” said Dennis N. Assanis, Provost and Senior Vice President for Academic Affairs for Stony Brook University. “His groundbreaking work in the field of theoretical condensed matter physics makes him well-deserving of the prestigious Sloan Research Fellowship, as well as a valuable addition to the distinguished faculty within our department of Physics and Astronomy.”

Awarded annually since 1955, the fellowships are given to early-career scientists and scholars whose achievements and potential identify them as rising stars and the next generation of scientific leaders. Since the program’s inception, the Sloan Foundation has awarded nearly $120 million in support of more than 4,200 early-career researchers; 66 of whom have been from Stony Brook University.

“Being selected for a Sloan Research Fellowship is an honor and a milestone in my career,” said Dr. Fidkowski. “This fellowship will help advance my research, and, in doing so, will advance the field of physics.”

“Stony Brook is proud of the fundamental research by innovative faculty like Lukasz Fidkowski,” says Sacha Kopp, Dean of the College of Arts and Sciences, “We are grateful for the support of the Alfred P. Sloan Foundation, and hope his work will serve as an inspiration for others.”

“Dr. Fidkowski’s research field experienced a major expansion recently,” said Laszlo Milhaly, Chair of the Department of Physics and Astronomy who nominated Dr. Fidkowski for the Sloan Research Fellowship. “It was recognized, both theoretically and experimentally, that new phases of materials exist that cannot be classified within the well-established theory of symmetry-breaking phase transitions that works very well for a large range of phenomena, like the freezing of water to ice or the development of magnetic order.  Examples for these new phases include fractional quantum Hall insulators and topological insulators and superconductors with symmetry-protected edge and surface states.”

“The beginning of a one’s career is a crucial time in the life of a scientist. Building a lab, attracting funding in an increasingly competitive environment, and securing tenure all depend on doing innovative, original high-quality work and having that work recognized,” said Dr. Paul L. Joskow, President of the Alfred P. Sloan Foundation. “For more than 50 years the Sloan Foundation has been proud to celebrate the achievements of extraordinary young scientists who are pushing the boundaries of scientific knowledge.”

Sloan Fellows may use their grants to pursue whatever lines of inquiry are of most interest to them, and they are permitted to use fellowship funds in a variety of ways to further their research including for such purposes as equipment, technical assistance, professional travel, trainee support, and any other activity directly related to the Fellow’s research. Funds are awarded directly to the Fellow’s institution.

Dr. Fidkowski joined Stony Brook in 2013. He received his BS in mathematics from Harvard University in 2001 and PhD in physics from Stanford University in 2007. He was a postdoctoral scholar at the California Institute of Technology and a researcher at Microsoft’s Station Q, a research lab focused on studies of topological quantum computing. He has made important contributions to the field of topological insulators, which are materials which will not conduct current through the bulk of the material, but will carry current along the surface.