President Stanley Appointed to NCAA Division I Board of Directors 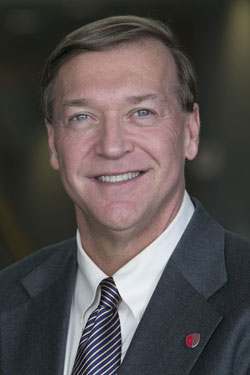 President Stanley Appointed to NCAA Division I Board of Directors

STONY BROOK, NY, January 15, 2015 – Stony Brook University President Samuel L. Stanley Jr., M.D., has been appointed to a four year term on the National Collegiate Athletic Association (NCAA) Division I Board of Directors.  Dr. Stanley was selected by the America East to be put forward to the NCAA as a nominee following the conclusion of his tenure as chairman of the America East Board of Presidents. The Division I Board represents nearly 350 NCAA Division I schools.

Dr. Stanley, whose appointment runs through August of 2019, is one of 24 university presidents and chancellors on the Board, which meets five times annually and is charged with reviewing NCAA Division I academic requirements, financial aid, eligibility, rules infractions and other policies.

“I am honored to have been selected to serve on the NCAA Division I Board of Directors,” said President Stanley. “I look forward to representing the America East teams and Stony Brook’s interests in the Colonial Athletic Association, and to advocating for Division I student athletes in our conferences and across the country.”

Dr. Stanley became the fifth president of Stony Brook University in July 2009, taking the helm of one of the nation’s most prestigious research institutions. One of just 62 members of the invitation-only Association of American Universities, Stony Brook is recognized for its innovative programs, groundbreaking discoveries and integration of research with undergraduate education.

“President Stanley’s appointment to the NCAA Board of Directors is well deserved,” said America East Commissioner Amy Huchthausen. “He is an innovative educator and leader who believes in the role college athletics plays on a college campus. He will no doubt be a valuable member of the board.”

The NCAA was established to protect student-athletes and now oversees 89 championships in 23 sports. With nearly 350 colleges and universities in its membership, Division I schools field more than 6,000 athletic teams, providing opportunities for more than 170,000 student-athletes to compete in NCAA sports each year.